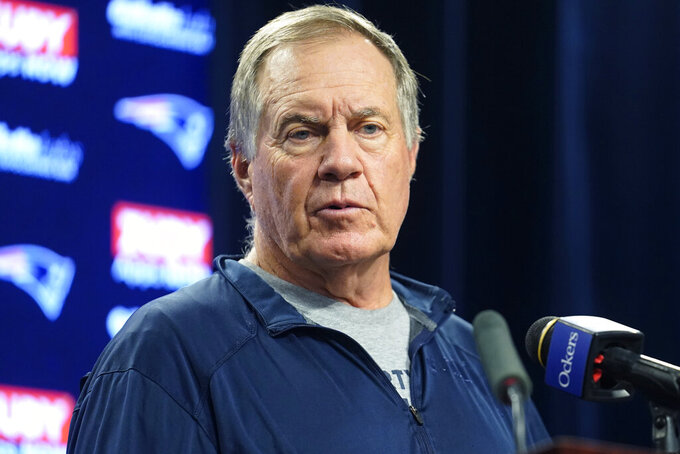 FOXBOROUGH, Mass. (AP) — Over his two-plus decades in New England, Bill Belichick has often said it can take until the midpoint of the season before he knows what type of team he has.

The Patriots coach held to that maxim Monday when describing how he felt about the state of his team less than 24 hours before selecting his first 53-man roster of the 2022 season.

“What it looks like on paper in the preseason and what it is in the regular season — I don’t think they’re all the same,” Belichick said. “Can’t really start attacking you until you attack other people.”

This preseason for the Patriots has been largely about figuring out things on offense as quarterback Mac Jones moves into his sophomore season following the departure of former offensive coordinator Josh McDaniels.

So, it’s no surprise that the position group Belichick feels best about as he turns his attention to the regular season is on the veteran-heavy defensive side of the ball.

“I would say the safety group is a pretty impressive group,” he said. “It’s good to see Jabrill (Peppers) out on the field. Devin (McCourty), (Adrian Phillips) and (Kyle) Dugger played a lot of football for us last year. You add Jabrill to that mix, and Myles (Bryant) has also played safety for us and the cornerback group. So, I’d say with those five guys it’s a pretty deep position.”

The same is true on the offensive line at tackle where Trent Brown and Isaiah Wynn have seemingly swapped spots this summer — Brown returning to the left side and Wynn moving to the right for the first time as a pro.

Belichick called the depth behind them, consisting of Justin Herron, Yodny Cajuste and Yasir Durant “not bad.” But as teams look around the league to bolster their initial rosters, that could make any or all of them a target in trade discussions that typically ramp up prior to Week 1.

The list of potential shoppers includes the Dallas Cowboys, who will be without left tackle Tyron Smith for an extended period after he sustained a torn left hamstring.

While Belichick estimates that around 90% of those talks don’t materialize, Patriots director of player personnel Matt Groh said having depth at any position is valuable at this point on the calendar.

“Everybody’s looking for good players right now,” Groh said. “There’s not too many teams in the league that aren’t looking for tackles. We feel very fortunate in the guys that we have.”

NOTES: Though he doesn’t officially have the title, senior football advisor Matt Patricia handled offensive play-calling duties in each of New England’s preseason games. But when asked Monday if he’d do it during the regular season, he would neither confirm nor deny that he’d keep the role. “That was just the preseason,” Patricia said. “We’ll see what happens as we get towards the regular season as we go forward. Right now, I’m just focused on today.”