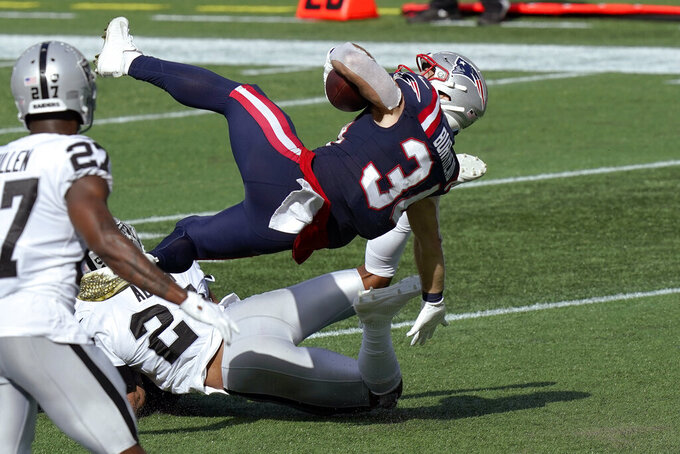 New England Patriots running back Rex Burkhead falls backward toward the end zone for a touchdown in the second half of an NFL football game against the Las Vegas Raiders, Sunday, Sept. 27, 2020, in Foxborough, Mass. (AP Photo/Steven Senne) 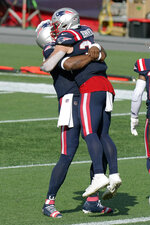 FOXBOROUGH, Mass. (AP) — Rex Burkhead can’t remember the last time he scored three touchdowns in a game. But he said every time he reached the end zone Sunday was for James White.

Burkhead had two rushing touchdowns and a receiving TD, and Bill Belichick joined George Halas (318) and Don Shula (328) as the only coaches in NFL history to reach 275 regular-season victories in the New England Patriots’ 36-20 win over the Las Vegas Raiders.

“We tried to go out there and play for him,” Burkhead said of White, who missed his second straight game after his father, Tyrone, was killed in a car accident. “He’s a brother to me. I really feel his pain.”

With White out, the Patriots’ running backs picked up the slack for an offense that struggled early. Sony Michel finished with nine carries for 117 yards. As a team, New England (2-1) rushed for a season-high 250 yards.

“We came together and just played hard. That’s what James White does," Michel said.

Cam Newton was 17 of 28 passing for 162 yards, a touchdown and an interception. Shilique Calhoun had two forced fumbles and Deatrich Wise Jr. a fumble recovery for a score.

The Patriots have won the last six meetings with the Raiders and improved to 47-9 in regular-season games following a loss. Raiders coach Jon Gruden dropped to 0-3 against Belichick.

Derek Carr finished 24 of 32 for 261 yards and a two TDs for Las Vegas (2-1). But he had two fumbles that led to a field goal for New England and a late touchdown when he lost the ball in the end zone and it was recovered by Wise. Josh Jacobs also had a fumble.

Las Vegas opened the season by scoring at least 34 points in its first two games with six red zone touchdowns. The Raiders were also second in the NFL, converting on 57 percent of third downs.

“We fumbled the ball in the red zone. We missed a field goal that we should make. We can’t stop the run in the second half. There are some issues that add up to a loss,” Gruden said.

But Carr said there’s no reason to panic.

“It’s one game,” he said. "If we’re gonna blow up everything after the good things that we’ve done after one game, then this game ain’t for some of those people. We are just fine. We’re gonna be fine.”

The offenses were stagnant in the first half as both teams struggled to get into a groove.

Things changed for the Patriots on their first drive of the third quarter when Michel, who struggled in the first two games, broke free for a 38-yard run.

A 15-yard pass from Newton to Burkhead got the Patriots into the red zone. Three plays later Burkhead capped the drive with a spinning 5-yard TD run to stretch New England’s lead to 20-10.

After both teams traded field goals, the Patriots took over with 11:22 remaining and ate up more than five minutes of clock with a 10-play, 86-yard drive that was capped with a 5-yard TD plunge by Burkhead.

“We played the best 30 minutes of football in the second half, which is what we needed,” Belichick said. "They didn’t get down about it, they just went out there and responded."

It took until the final minute of the first half for both teams to reach the end zone.

Leading 6-3, Newton found Burkhead over the middle for a short pass, which he carried the rest of the way for a leaping 11-yard touchdown with 34 seconds left.

Following the kickoff, the Raiders got help from a pass interference call on Stephon Gilmore to get into Patriots territory. Two plays later Carr hooked up with Hunter Renfrow for a 26-yard completion to get to the 1. He then found tight end Foster Moreau for a 1-yard TD to trim New England’s lead to 13-10.

Both teams were missing key starters.

The Patriots were down center David Andrews and rookie linebacker Josh Uche after both were placed on IR Saturday. Joe Thuney shifted over to center, and rookie Michael Onwenu started at left guard.