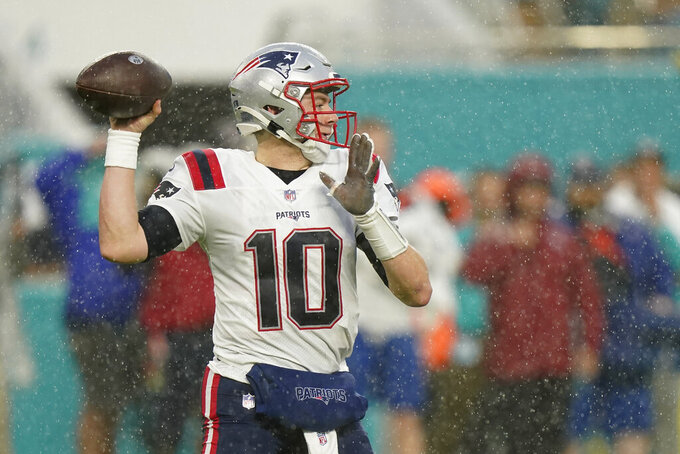 New England Patriots quarterback Mac Jones (10) looks to pass in the rain, during the first half of an NFL football game against the Miami Dolphins, Sunday, Jan. 9, 2022, in Miami Gardens, Fla. (AP Photo/Lynne Sladky)

ORCHARD PARK, N.Y. (AP) — If this is the end of the line for Jerry Hughes’ career, the Buffalo Bills defensive end is primed for the playoffs.

Whether it’s facing the rival New England Patriots for a third time in seven weeks or the prospect of playing in potentially sub-zero temperatures on Saturday night, the 12th-year veteran is eager to take both head on.

“Spend some time outside, take off your pants, get in some shorts and enjoy that weather, really embrace it,” Hughes said of preparing for what could be the coldest game in Bills' history.

As for the Patriots, there's more than enough bad blood between the divisional foes to get him amped.

“It’s just going to be an old-school slobber-knocker,” Hughes said, at a time when his future in Buffalo is uncertain in completing the final year of his contract. He’d like to return, but that's out of his control and outside of his focus.

More important is Buffalo having an opportunity to make up for unfinished business a year after its deepest playoff run in 27 years ended with a loss to Kansas City in the AFC championship game.

“If this is my last opportunity being a Buffalo Bill, I want to go out on top,” Hughes said.

Leave it to the lone player left on Buffalo’s roster from the late Hall of Fame owner Ralph Wilson’s era, and making his fourth playoff appearance in five years, to set the stage for a rubber match after the teams split their season series.

Buffalo briefly ceded first place in the AFC East after being embarrassed at home in a 14-10 loss to New England on Dec. 6. Three weeks later, the Bills responded with a 33-21 win at New England as part of a four-game winning streak to clinch their second consecutive division title.

Standing in their way, fittingly, are the Patriots, an opponent which essentially owned Buffalo by winning 35 of 40 meetings from 2000 to 2019, but have lost three of the past four.

“I had a feeling we would probably see them again,” Bills safety Jordan Poyer said.

While Buffalo (11-6) has become the team to beat in the AFC East, the Patriots (10-7) have undergone a fast-tracked transition following Tom Brady’s departure two years ago.

After missing the playoffs last season for just the fourth time since coach Bill Belichick’s arrival in 2000, the retooled Patriots leaned on a multi-faceted running attack and sturdy defense to take the pressure off rookie quarterback Mac Jones.

It’s how the Patriots faltered down the stretch in losing three of four, and being outscored by a combined 93-62 in those defeats, that's cause for concern.

“All we wanted was a ticket to the dance,” Judon said. “We got that. We’re in the playoffs. And now we gotta go make it happen.”

It helps that the Patriots know they can win in the wintry Buffalo conditions after Jones attempted just three passes and watched New England’s running attack churn out 222 yards in facing 30 mph wind gusts.

“I don’t think we lack confidence, “Belichick said. “We do enough good things to be competitive. We just need to be more consistent.”

New England's inability to stop Buffalo on third down in the second meeting went a long way toward the Bills’ victory. Buffalo went 6 of 12, converting third downs on three of its first four drives in building a 17-7 lead.

“If they convert on third down, then literally, you’re out there all day,” Belichick said.

After hosting two playoff games a year ago with about 7,000 fans present because of COVID-19 restrictions, the Bills look forward to having what should be close to a full house on hand for the first time in the postseason since Hall of Famer Jim Kelly’s final game, a 30-27 loss to Jacksonville in a 1996 wild-card playoff.

“First of all, it’s a huge sense of pride to see a fanbase support you through that,” center Mitch Morse of fans showing up in the worst weather. “And then you also question the inebriation level of some of those people.”

The Patriots may have a decision to make on the offensive line if starting left tackle Isaiah Wynn (hip, ankle) is unavailable.

Wynn allowed nine sacks in 16 games this season, but his biggest value has been in the run game where he’s been able to use his 6-foot-2, 310-pound frame to help set the edge.

The Patriots used it to their advantage in the first two meetings against Buffalo, by combining for 371 rushing yards and four touchdowns.

If Wynn's unavailable, one option will be shifting right tackle Trent Brown to the left side and inserting Mike Onwenu at right tackle.

PATS ON THE BACK

After losing his first three meetings against New England, Buffalo’s Josh Allen has won three of four. His three wins over the Pats are more than any Bills QB since Doug Flutie had a 4-2 record during his three seasons in Buffalo from 1998-2000.

“Wins are a team stat in my opinion,” Allen said. “Obviously, the last couple of years we’ve had a pretty good team and guys doing the right things, and that usually relates to wins.”