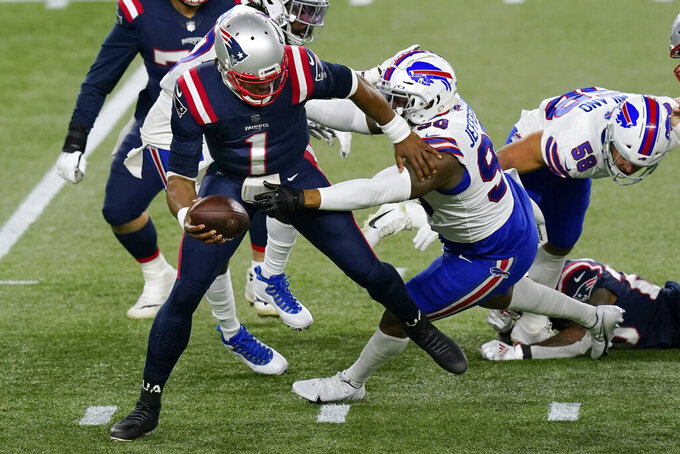 FOXBOROUGH, Mass. (AP) — The Buffalo Bills put a cherry atop the changing of the guard in the AFC East.

A week after unseating the Patriots as division champions, Buffalo became the first AFC East team in two decades to sweep New England in a season series with a 38-9 victory Monday night.

Josh Allen passed for four touchdowns to help the Bills stay in the mix for the No. 2 seed in the AFC playoffs.

The Bills (12-3) last swept the Patriots in 1999. The last division opponents to sweep the Patriots were the Jets and Dolphins in 2000. The Patriots’ 19 straight seasons without losing both games to a divisional opponent was an NFL record. New England (6-9) will finish with its first losing record since coach Bill Belichick’s first season in 2000.

Allen was 27 of 36 for 320 yards. He now has 34 touchdown passes, surpassing Jim Kelly to set a franchise single-season record. With his eighth 300-yard game, he also surpassed Drew Bledsoe’s single-season team record of seven.

“We’ve got one game left. And all that, it’s cool, the records, this and that," Allen said. "But the plan is to get to 13-3 and give ourselves a chance in the playoffs. It doesn’t mean much if we can’t get it done.”

“I’m new to this team so I’m basking in (the) ambience of everybody,” Diggs said. “I’ve got a young quarterback who’s balling.”

The Patriots struggled to move the ball for most of the night with running back Damien Harris out for the second straight game with an ankle injury. Cam Newton had a touchdown run but was just 5 of 10 for 34 yards passing before being pulled in the third quarter for backup Jarrett Stidham.

Newton’s 34 yards passing are the fewest by a Patriots starting quarterback since 1993.

He said the season has been frustrating because the work he has put in hasn't translated into wins.

“I’ve sacrificed so much this year, and it hurts when you have an outing that you have tonight," he said.

Belichick said he hasn't made any decisions about who will start the Patriots' finale Sunday against the New York Jets.

The Bills had no trouble moving the ball against a depleted Patriots defense that was missing linebacker Ja’Whaun Bentley and defensive tackle Lawrence Guy due to shoulder injuries.

Their absences were most glaring in the passing game. New England struggled to put pressure on Allen, allowing him time to find open receivers. The Patriots allowed a season-worst 474 yards overall.

The Patriots closed to 10-9 on Newton's 9-yard TD run in the second quarter, but Nick Folk missed the extra point and the Bills pulled away from there.

Buffalo used its passing game to march down the field on the ensuing drive. Allen completed 5 of 7 throws for 59 yards and a 4-yard TD to Lee Smith.

After a quick three-and-out by New England, the Bills went right back to work.

Allen misfired on his first pass of the drive, and then connected with Diggs for 17 yards to get the ball to midfield. Diggs got free again on the next play, slipping behind J.C. Jackson on a slant and sprinting the final 32 yards for the touchdown to make it 24-9.

The Allen-Diggs connection worked again on the opening drive of the second half. Allen found Diggs three times during an eight-play, 75-yard drive that ended with an 18-yard TD play by the star receiver.

Bills: S Jordan Poyer was helped off field late in second quarter to be evaluated for a head injury.

Diggs became the third player in the 51-year history of the AFC East to top 110 receptions and 1,400 yards receiving in a season. The other two are Wes Welker (New England, 2011) and Marvin Harrison (Indianapolis, 1999).

With his TD run in the second quarter, his 12th of 2020, Newton tied Steve Grogan for the franchise single-season record for rushing TDs by a quarterback. It also marked Newton’s 70th career rushing TD, extending his NFL record.

Bills: Host the Dolphins on Sunday.

Patriots: Host the Jets on Sunday.