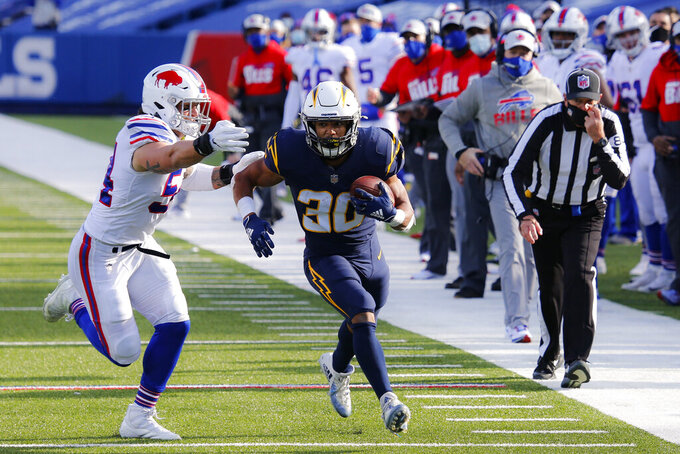 ORCHARD PARK, N.Y. (AP) — Don’t expect to hear a peep out of A.J. Klein if the Buffalo Bills linebacker goes from earning AFC defensive player of the week honors one week to being relegated to the sideline the next.

“There’s no concern,” Klein said Thursday, when asked of the potential of losing playing time with starter Matt Milano nearing his return from a partially torn pectoral muscle. Milano resumed practicing this week after missing three games, and could be activated off injured reserve before Monday night, when the AFC East-leading Bills (8-3) play the San Francisco 49ers (5-6) at the Niners' temporary home in Glendale, Arizona.

“I know how this league works. I understand my role,” Klein said. “Whether or not my role changes, that’s not a concern to me. All I have to do is try to obviously maximize the time that I have on the field.”

The eighth-year player maxed out last weekend, playing all 83 defensive snaps in a 27-17 win over the Los Angeles Chargers.

Klein led the Bills with 14 tackles, including three for a loss and 1 1/2 sacks.

It was latest in a string of strong outings for Klein, who's in his first season with Buffalo. He has a career-best three-game sack streak and has combined for 30 tackles over that span.

What’s more impressive is how quickly Klein overcame his early-season tentativeness and got comfortable as a weak-side linebacker, a position he remembers playing only once before.

“It took me a little while to feel comfortable,” he said. “But that’s not an excuse. I expect to play to the best of my ability, and for me, it was finding that familiarity and just going out and playing free.”

Klein’s improved play reflects a defense that's finding its identity after a troubling start that was complicated by injuries, including to Milano, who has missed five of the past seven games.

Despite returning nine starters to open the season, Buffalo looked nothing like the stingy unit that allowed the second-fewest points and third-fewest yards in the NFL last year.

In opening 4-2, Buffalo was allowing an average 28 points per outing after giving up that many just once last year. The stretch closed with a 26-17 loss to Kansas City. The Bills also gave up 400-plus yards of offense three times in that span — once more than in 2019.

The defense has been trending upward since.

“Some things we’ve got to iron out, but yeah, we’re getting close,” coordinator Leslie Frazier said Monday. “The consistency is beginning to show up a little bit.”

Though Buffalo still needs work on defending Hail Mary pass attempts, such as DeAndre Hopkins’ 43-yard touchdown catch that sealed Arizona’s 32-30 win three weeks ago, the improvement is evident in the production.

The defense was particularly strong in closing out the win against the Chargers, even after Buffalo’s offense turned the ball over on each of its first three possessions of the fourth quarter. The Bills limited LA to a field goal on its final five possessions.

Klein ended one of those drives by sprinting down the line of scrimmage and pushing running back Joshua Kelley out of bounds for a 3-yard loss on third-and-1 at Buffalo’s 7. LA settled for a 27-yard field goal.

As much as the linebacker has become more familiar with his new position, Frazier said he’s adapted the defense to fit the player’s strengths.

That connection is one of the reasons Klein signed a three-year deal with Buffalo in free agency this offseason after spending the past three years in New Orleans.

Klein shrugged off early-season criticism of his play by saying, “I don’t read articles.” And he doesn’t intend to change that approach now that he’s playing better.

“To be honest, I know I’ve been playing good football,” Klein said. “But I still know there’s more out there for me.”