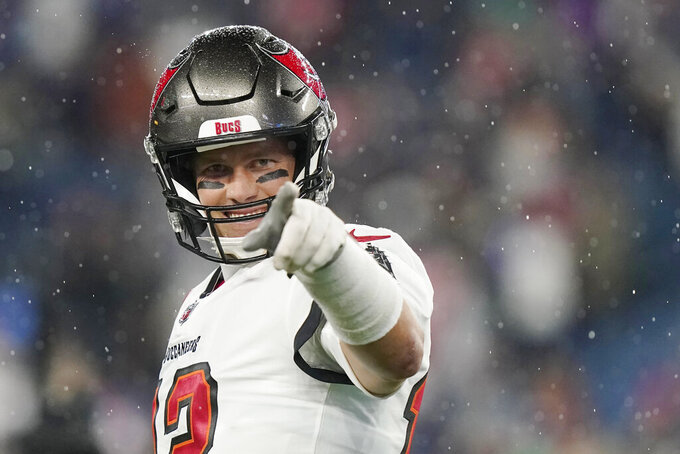 FOXBOROUGH, Mass (AP) — Put another mark in the win column for Tom Brady in his lingering grudge with Bill Belichick.

The Buccaneers quarterback, who has already won a Super Bowl since leaving his longtime coach behind, won his first matchup against Belichick on Sunday night when he led Tampa Bay to a 19-17 victory over the New England Patriots. Brady is the fourth quarterback with wins against all 32 NFL teams, and he has now beaten every team in the NFL, and Belichick is the 100th opposing coach he has victimized.

In his return to New England, where he played 20 seasons and won six Super Bowls, Brady completed 22 of 43 passes for 269 yards, with no interceptions but no touchdowns. He also led Tampa Bay (3-1) to the go-ahead field goal with 2 minutes left in the game.

Belichick gave Brady a very brief hug at midfield after the game, and had little to say about it afterward.

“We went against Tom Brady every day, every day in practice defensively. So it’s not like we’ve never seen Tom Brady before,” Belichick told reporters. “They are a good football team and he’s a great quarterback, and I think that’s all – goes without saying.”

But Belichick also visited Brady in the visitor’s locker room, staying for about 20 minutes. Brady also caught up with Patriots offensive coordinator Josh McDaniels and former teammates including David Andrews and Devin McCourty.

And he exchanged a handshake with new Patriots quarterback Mac Jones, a first-round draft pick who is the team's latest attempt to replace the future Hall of Famer. “He just told me to keep my head up and keep working,” Jones said.

A sixth-round draft pick who developed into the most accomplished quarterback in NFL history —- he added another record, for the most regular-season passing yards, on Sunday night -- Brady led the Patriots to nine Super Bowls in 20 years.

But he left as a free agent for Tampa Bay after Belichick balked at committing to him into his mid-40s. Brady insisted that reports of animosity are overblown.

“So much is made of our relationship,” he said. “But nothing is really accurate that I ever see. It definitely doesn’t come from my personal feelings or beliefs."

But much of the narrative comes from Brady confidants, including his father.

While Brady won his seventh NFL title last year, the Patriots went 7-9 with Cam Newton as quarterback. They drafted Jones 15th overall this year and turned the offense over to him.

Jones completed 31 of 40 passes for 275 yards and two touchdowns, and he also threw one interception. He took over right after Ryan Succup’s 48-yard field goal gave Tampa Bay a 19-17 lead at the two minute warning, and efficiently led the Patriots across midfield.

With a first down at the Buccaneers 44, Jones threw one incompletion, then hit Jacobi Meyers for 7 yards before another incompletion. That left Nick Folk, who had made 36 consecutive field goal attempts, with a 56-yarder to take the lead; he hit the left upright.

“The blessing is it was nice for Tom,” Buccaneers coach Bruce Arians said, adding that Brady was careful not to make any mistakes that could cost the team the game. “It was a big week for him, but it was a bigger week for the team.

“I was very, very frustrated with everybody saying this was a quarterback and a coach. This is a team sport. The Bucs won this game. We beat the Patriots,” he said. “We were losing sight that this is a team game. Everybody wanted to make this all about Brady and Belichick. I don’t think Bill played a snap. He had 22 guys out there playing their (butts) off, and I knew he would. We had 22 guys out there playing their (butts) off. One of them just happened to be named Brady.”