Browning 'taking charge' of Vikings, with other QBs absent 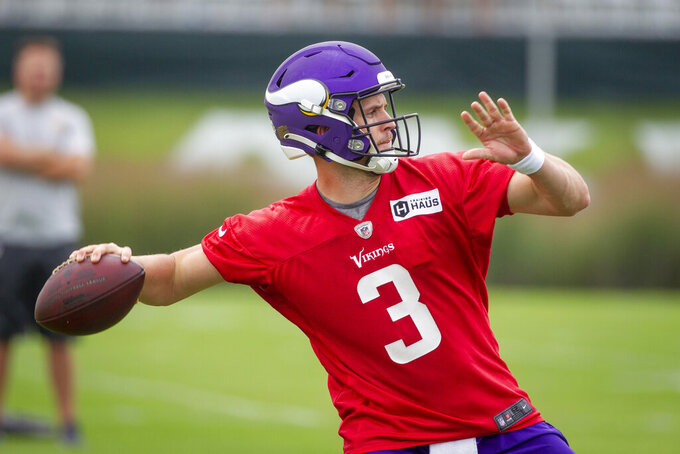 FILE - In this Wednesday, July 28, 2021 file photo, Minnesota Vikings quarterback Jake Browning (3) participates in NFL training camp in Eagan, Minn. Jake Browning bided his time on Minnesota's practice squad the last two years, and his opportunity to prove his worth as the primary backup quarterback for the Vikings came suddenly this weekend when Kirk Cousins and the other two backups were sidelined under COVID-19 protocols.(AP Photo/Bruce Kluckhohn, File)

EAGAN, Minn. (AP) — Jake Browning left Washington with more wins than any player in Pac-12 history, a four-year starter whose productive career put him in the company of a long line of standout Huskies quarterbacks.

His experience in the NFL has been a stark contrast from the pageantry of the national semifinals he reached as a sophomore and the Rose Bowl that served as his final college game.

Browning's first two years as a pro were exclusively behind-the-scenes work on the Minnesota Vikings practice squad, as he took the unglamorous steps toward trying to climb up the depth chart and get a foothold in a league that annually chews up and spits out another slate of prospects.

“Basically finding any possible way that I can get better without actually taking a ton of reps," said Browning, who suddenly found himself in heavy duty this week when starter Kirk Cousins and backups Kellen Mond and Nate Stanley were sidelined by COVID-19 protocols.

He made good on those extra opportunities, too.

After telling head coach Mike Zimmer not to cut his plays on Saturday, the first day Cousins and company were out, Browning turned some heads with a crisp performance under the lights at the team's facility. He has continued to confidently lead the offense since then, with emergency free agents Danny Etling and Case Cookus joining camp this week to lighten the load.

“I’ve learned he’s a good leader,” Zimmer said. "He’s a good competitor. I’ve seen him take charge out here in all the practices. Instead of sitting in the back and biding his time, he’s taking charge and throwing, understanding what’s going on, and I think the guys feel that.”

Mond tested positive for the virus, and Zimmer only shrugged his shoulders when asked Wednesday when the rookie might be back. Cousins and Stanley, who were deemed high-risk close contacts, were expected to return to practice on Thursday, Zimmer said.

Being the only vaccinated quarterback can only help Browning's cause to get the No. 2 spot, but handling his unexpected time this week in the spotlight well will go even further.

“Gary Kubiak used to say, ‘Nobody knows if you’re ready until you just get thrown in there,'” Browning said, adding: “That’s part of being a backup in this league. You’ve always got to be ready.”

Browning never had to redshirt in college, so the last two years were a significant adjustment.

“I spent a lot of time in the weight room. I think just in general, having some success then going undrafted, it definitely makes you look in the mirror and be like, ‘All right. I went undrafted for a reason. What do I need to get better at?’” Browning said.

One of those areas was arm strength, so he started working with quarterback trainers before the 2019 scouting combine. Once he latched on with the Vikings, picking up the art and science of NFL game preparation became paramount. Kubiak, the former offensive coordinator and widely admired adviser who retired after last season, was an invaluable resource.

“A lot of the work Jake’s done the past two years, nobody really knows about, but he came in with me and absorbed the playbook a lot faster than I possibly could have,” said offensive lineman Uli Odoh, who's been taking first team turns at both right guard and left tackle. "He’s done a great job.”