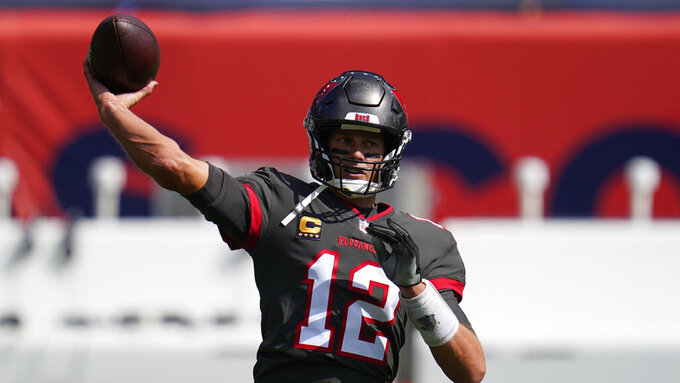 TAMPA, Fla. (AP) — A stingy defense that’s getting better by the outing is doing its part to help Tom Brady transform the Tampa Bay Buccaneers into winners.

The six-time Super Bowl champion had his best game since joining his new team, throwing for 297 yards, three touchdowns and no interceptions in a 28-10 victory over the Denver Broncos. Just as compelling was another stellar effort by a defense that had six sacks and forced two turnovers.

Even before signing Brady in free agency, coach Bruce Arians insisted the key to ending the second-longest playoff drought in the NFL would be the emergence of a largely young, aggressive defense that began to build confidence and enjoy success late last season.

Bringing in Brady, a three-time league MVP who’s surrounded by an abundance of skilled offensive playmakers, hasn’t changed that thinking.

The Bucs landed Brady with a two-year, $50 million contract. They also did what was needed to keep the core of the defense together by placing the franchise tag on 2019 NFL sacks leader Shaquil Barrett and re-signing lineman Ndamukong Suh and linebacker Jason Pierre-Paul.

“We built this team on defense,” Arians said. “Tom was just the icing on the cake.”

Seven different players have at least one sack during Tampa Bay’s 2-1 start, including Pierre-Paul, who has one in five consecutive games dating to last season.

Barrett, who paced the league with 19½ in 2019, has two. So does Suh and rookie safety Antoine Winfield Jr.

“I think Todd is doing a great job of putting players in position to get good matchups,” Arians said.

“Will Gholston’s got sacks, Vita (Vea) got sacks, Suh’s got sacks, both outside ‘backers, inside ’backers and safeties,” the coach added. “It’s a matter of pick your poison, who you want to try to block, because somebody’s coming from somewhere.”

For the second straight week, the Bucs built a double-digit halftime lead before coasting to victory in the second half. Arians likes the way the team has played in building leads against the Panthers and Broncos. However, he said they’ve got to be better finishing games.

“I think it’s just playing a little bit – not scared, but not wanting to mess up and give the (opponent) something to get back in the game,” the coach said.

Arians insists he’s happy with the progress of the running game, with starter Ronald Jones sharing the workload with Leonard Fournette and LeSean McCoy. Numbers suggest there’s lots of room for improvement. A week after Fournette rushed for 103 yards, in large part because of a 46-yard TD run against Carolina, the Bucs averaged 2.7 yards per carry while gaining 68 yards on 25 attempts at Denver.

A week after having no catches and only having one pass thrown his way, Rob Gronkowski had six receptions for 48 yards. O.J. Howard, meanwhile, had three catches for 49 yards. Arians explained the tight ends' production had more to do with the way the Broncos defended the Bucs than a concerted effort to get them more involved in the passing game.

If Arians and Bowles had one complaint about Sunday’s defensive effort, it’s that the unit yielded a 75-yard touchdown drive in the final two minutes of the first half.

“I think we’re good, getting to very good. We have to finish that (first) half — we can’t give up that touchdown to finish out the half to be great,” Arians said. “I would just say we’re good right now.”

Arians believes a condensed training camp and cancelled preseason is contributing to an increase in muscle injuries.

“I think that had a big part of it. The whole league (has experienced) soft-tissue injuries and major injuries,” Arians said. “I think you’re starting to see that now.”

12 — The Bucs' sacks through three games

Home against the Los Angeles Chargers next Sunday.