Buccaneers welcome bye to rest up for season-ending stretch 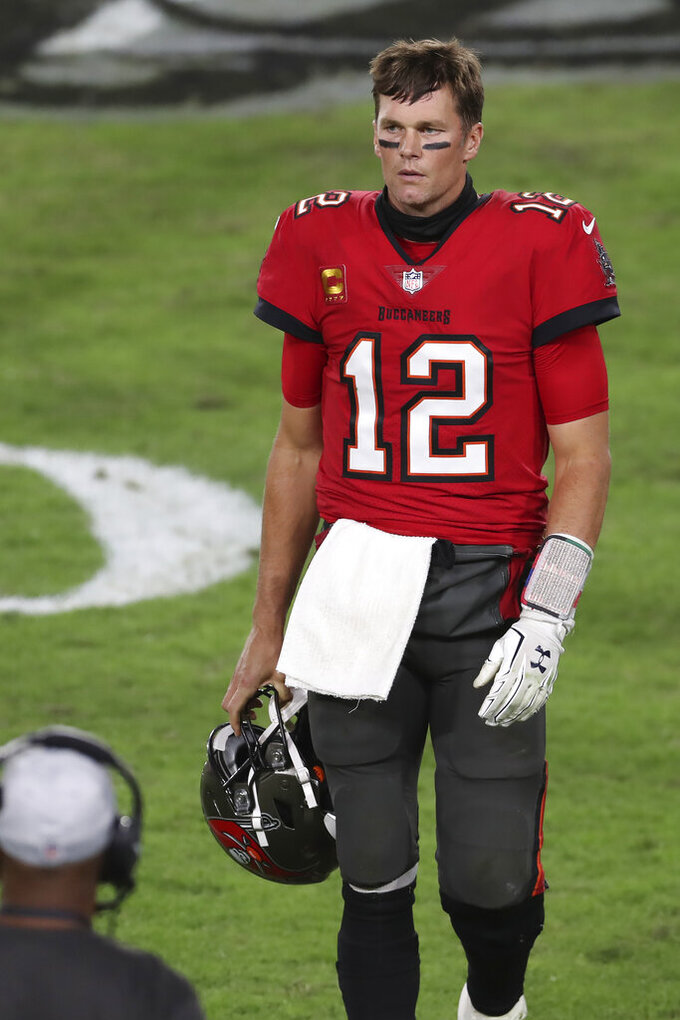 Tampa Bay Buccaneers quarterback Tom Brady (12) reacts as he walks to the bench after throwing an interception to Kansas City Chiefs cornerback Rashad Fenton during the second half of an NFL football game Sunday, Nov. 29, 2020, in Tampa, Fla. (AP Photo/Mark LoMoglio)

The Buccaneers (7-5) have lost three of their past four games and will use the break to try to get healthier and set Tom Brady up for a strong stretch run that could produce the franchise’s first playoff berth since 2007.

“First and foremost, get healthy and beat the virus,” coach Bruce Arians said of the team’s objective for this week’s open date.

“Every team that has come back from the bye has had a virus problem. We can’t finish our season with eight, nine or 10 guys staying home,” Arians added. “Every game is a big game — 11-5 will do it. One at a time, but the first thing is to get healthy and beat the virus.”

It also means getting the Brady-led offense, as well as one of the NFL’s stingiest defenses, back on track after a tough four-week stretch.

Slow starts have been part of the problem, with opponents outscoring them 52-7 in the opening quarter of a road win over Carolina and home losses to the New Orleans Saints, Los Angeles Rams and reigning Super Bowl champion Kansas City Chiefs.

Arians said some of the work has already begun.

“We evaluate each week, so it’s not really anything to go back and look at because we already have all the self-scout, I call it. Some people call it analytics,” the coach said. “I think we’re getting better each and every week.”

Nevertheless, there is enough inconsistency to be concerned.

Brady and the rest of the offense have not performed nearly as well against most of the stronger teams on the schedule through 12 games.

The defense shoulders some of the responsibility, too, with Sunday’s 27-24 loss to the Chiefs just the latest example.

Patrick Mahomes built a big lead in the opening quarter, with Tyreek Hill catching seven passes for 203 yards and touchdowns of 75 and 44 yards.

Kansas City still led by three scores entering the fourth quarter, when Brady cut into a 17-point deficit with a pair of TD passes to Mike Evans.

“We have to start games faster defensively. That was a big emphasis all week, and even the night before the game in talking to them,” Arians said. “I said the same thing offensively. We’ve got to convert those early third downs and get some scores like we did earlier in the season.”

Running back Ronald Jones has been an effective player — when the Bucs have been able to get him involved in the offense. Falling behind early, as they did Sunday, limits his opportunity. Once again, though, he showed what type of impact he can have with 103 yards from scrimmage on 10 just touches. He turned a short throw into a 37-yard TD on his only pass reception and had a 34-yard run on his way to rushing for 66 yards on nine attempts.

The Bucs converted just three of nine third downs against the Chiefs, who were 6 of 12. Arians said an inability to extend drives, especially, is one of the main reasons Tampa Bay finds itself playing from behind week after week.

The offensive line got a boost Sunday when left guard Ali Marpet returned after missing three games because of a concussion. Left tackle Donovan Smith also made it through the game after not being able to practice last week because of an ankle injury. Smith tested the ankle in pregame warmup and told Arians he could probably play a half. He wound up playing the whole game.

Scotty Miller. While offensive coordinator Byron Leftwich has said the second-year wide receiver’s lack of playing time the past month is related to injuries rather than Antonio Brown’s additional to the roster, Miller has just two catches for 14 yards in four games since Brown was activated following an eight-game suspension for violating the NFL’s personal conduct policy. Prior to Brown’s arrival, he had 25 catches for 400 yards and two touchdowns.

Cornerback Jamel Dean, who sat out Sunday’s game, remains in the concussion protocol.

80 — as in years old. Arians, 68, joked Sunday that that’s how long his Kansas City counterpart, 62-year-old Andy Reid, will be able to coach because of Super Bowl MVP Patrick Mahomes, who lit the Bucs up for 462 yards passing and three touchdowns.

Bye week before finishing regular season with home games against Minnesota and Atlanta and road dates against Detroit and the NFC South rival Falcons.