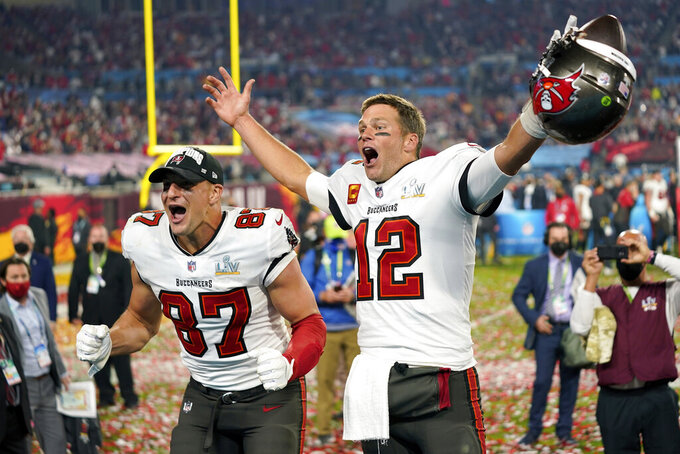 FILE - In this Sunday, Feb. 7, 2021 file photo, Tampa Bay Buccaneers tight end Rob Gronkowski (87), left, and Tampa Bay Buccaneers quarterback Tom Brady (12) celebrate together after the NFL Super Bowl 55 football game against the Kansas City Chiefs in Tampa, Fla. NFL Films has been chronicling Tom Brady’s career since he entered the league in 2000, but there are still times when there are still new things to reveal. That is the case with this year’s Super Bowl film, chronicling Brady’s seventh championship and his first with the Tampa Buccaneers. (AP Photo/Steve Luciano, File)

NFL Films has been chronicling Tom Brady's career since he entered the league in 2000. Somehow, they always seem to be new things to reveal.

That is the case with this year's Super Bowl film, chronicling Brady's seventh championship and his first with the Tampa Bay Buccaneers. The 100-minute film was released to the public by Cinedigm on Tuesday.

“We are always looking for clues about what makes him different and there are a couple that come out in this film,” NFL Films senior producer Todd Schmidt said. “You see more of his commitment to his family and the team. Through the sound on the sideline, you can see how much command he has on the game even when he isn't playing. You can see his enthusiasm and how much he enjoys camaraderie.”

Brady arrived in Tampa after 20 seasons in New England and led the Buccaneers to their second championship, culminating in an eight-game winning streak capped by a dominating 31-9 victory over the Kansas City Chiefs in Super Bowl 55. Tampa Bay also became the first team to win a Super Bowl title on its home field.

Schmidt said Brady's progression in acclimating to the vertical passing game of coach Bruce Arians is shown throughout the film, which reviews Tampa Bay's season.

Also front and center during the video is how the Buccaneers' defense shut down Kansas City quarterback Patrick Mahomes in the title game. Tampa Bay sacked Mahomes three times, forced two interceptions, and held the Chiefs without a touchdown.

“You really get to see how little time Mahomes had during the game. The pressure was intense and reminded me of what Dallas did to Denver in Super Bowl 12,” Schmidt said.

NFL Films has dealt with many challenges during its nearly 60 years, which now includes trying to chronicle the Super Bowl in the midst of a pandemic. There are usually 100 NFL Films personnel on the field during a Super Bowl, but there were only 14 this year. Despite that, 34 cameras were used during the game, equaling the most ever, and 11 players were wired for sound.

Schmidt said by the end of the season more than 3,000 hours were recorded for all regular-season and playoff games throughout the league.

“The quality is still there. We have always adapted,” Schmidt said. “At the end of the day it is still someone with a camera and telling a story.”