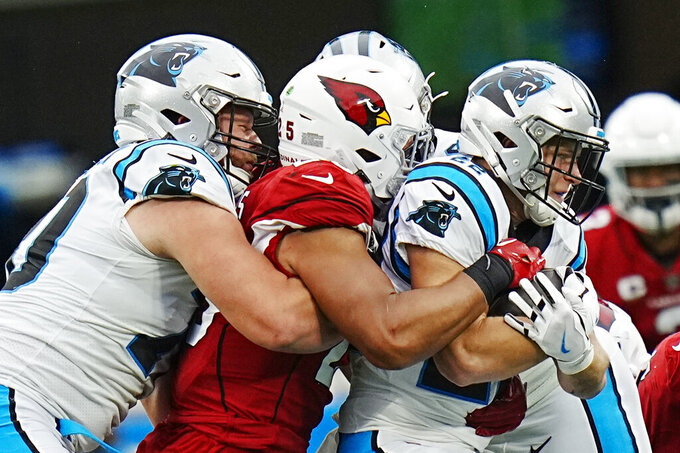 Carolina Panthers running back Christian McCaffrey is tackled by Arizona Cardinals linebacker Zaven Collins during the first half of an NFL football game on Sunday, Oct. 2, 2022, in Charlotte, N.C. (AP Photo/Rusty Jones)

TEMPE, Ariz. (AP) — The standings say the Arizona Cardinals are an average team with a 2-2 record.

“Good, not great,” Allen said. “We haven't played anywhere near our potential, but we're not saying the sky is falling. It's not like we're 0-4, but there's definitely room for improvement.”

The Cardinals moved back to .500 with a 26-16 win on Sunday at Carolina, snapping a six-game losing streak against the Panthers. Arizona had another slow start but rallied in the second half with 23 straight points.

Kyler Murray had a solid day, finishing with 207 yards passing, two touchdowns and one interception. He also ran for a touchdown. The defense played well with Zach Allen, J.J. Watt and Dennis Gardeck all contributing important plays.

The so-so start contrasts with last year, when the Cardinals opened with a 7-0 record, eventually improved to 10-2, and for a few weeks looked like one of the NFL's best teams.

That's not necessarily a bad thing.

Arizona's players and coaches said last year's hot start was a bit of fool's gold. Once adversity hit in the second half, the Cardinals didn't handle it well, losing four of their final regular season games before a lopsided playoff loss to the Rams.

Now the Cardinals are hoping some of this year's early adversity gives way to better play as the season progresses. The offense has to survive two more games before three-time All-Pro receiver DeAndre Hopkins returns from his six-game suspension for violating the NFL's rules on performance-enhancing drugs.

“We still haven't hit our stride on offense,” Cardinals coach Kliff Kingsbury said. "You've seen spurts. I've talked to the guys today, we have the talent and the effort, but we haven't put it together, coaching or playing.

“Really proud of the fight we've shown — I think that can pay dividends down the road, but we've got a lot of things we've got to tighten up on offense.”

The defense has played 10 straight quarters of solid football, starting with the second half of the team's come-from-behind 29-23 win over Las Vegas on Sept. 18.

Allen, Watt and Gardeck are making big plays, which has helped offset the loss of Chandler Jones, who signed with the Raiders during the offseason.

The Cardinals can't keep falling behind in the first half. Arizona's slow starts have forced it to play from behind each week and the team is fortunate to be 2-2.

LB Zaven Collins has taken a big step forward in his second year. The No. 16 overall pick in 2021 led the team with eight tackles against the Panthers and is starting to grow into his role as a leader at middle linebacker.

WR Greg Dortch caught just one pass for 6 yards on and it looks like his role will decrease in the coming weeks now that Rondale Moore is healthy and others like Antoine Wesley are eligible to come back from injured reserve.

The Cardinals have some reinforcements coming. Cornerback Antonio Hamilton (feet), backup quarterback Colt McCoy (calf) and Wesley (groin/hip) were all designated to return from injured reserve and can begin practicing this week. ... K Matt Prater (hip) and OL Justin Pugh (elbow) are day-to-day. ... The Cardinals will keep a close eye on Watt after the defensive lineman said he had his heart shocked into rhythm after going into atrial fibrillation this week. Watt played on Sunday.

0 — The Cardinals have scored zero points during the first quarter of their four games this season.

The Cardinals host Philadelphia — the NFL's final undefeated team — on Sunday. Arizona's defense gets another tough task in trying to stop Eagles QB Jalen Hurts, who has been one of the league's breakout players through four weeks.

The Cardinals are also trying to defend their home field. Under Kingsbury, Arizona is 17-10 on the road but just 9-16-1 at home.