Chargers focused on holding leads with playoffs in reach 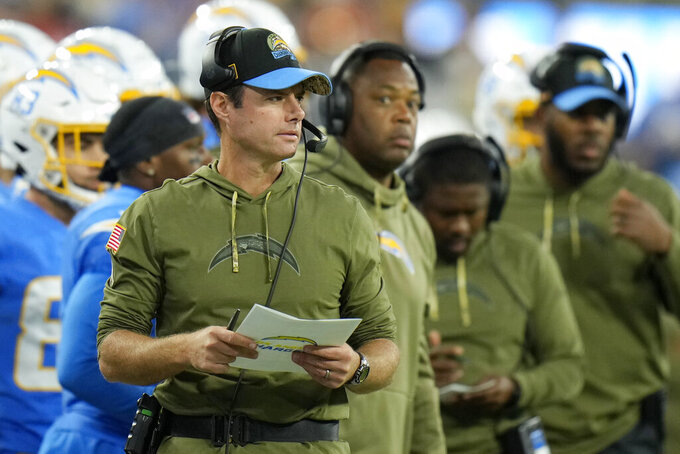 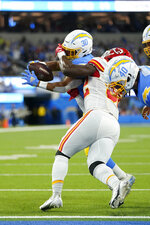 Thanksgiving week is usually about the time of the NFL season when teams and fans begin to pay close attention to the playoff picture.

Sunday night's 30-27 loss to the Kansas City Chiefs marked the second straight week the Bolts had a lead going into the fourth quarter and were unable to make it stand. They are 2-3 this season when leading after three quarters.

“We’re trying to take it one game at a time. Our focus is going to be on Arizona. We played two really tough games in a row in primetime against two, as you guys know, really quality teams, and they’ve been great games. I feel like our level (of play) has been high.

“I think we know exactly where we stand right now, in terms of the context of the NFL landscape," Staley said. "As tough as it is, last night and the week before, you can’t let those guys affect your next one.”

Despite being 5-5 and one game out of a wild card, the Chargers are in a favorable position to make a run. Only two of their remaining seven opponents have winning records, and both those games are at home against Miami (Dec. 11) and Tennessee (Dec. 18).

The wild card appears to be the Chargers' only route to the postseason after Kansas City's victory gave them a three-game lead in the AFC West. The Chiefs also hold the tiebreaker with their sweep of the season series.

The returns of receivers Keenan Allen and Mike Williams helped bolster an offense that had been stuck in neutral the past two games. Justin Herbert passed for 280 yards, and the running game had 115 yards after four straight games under the century mark.

The biggest concerns remain on defense. Los Angeles has allowed at least 157 yards rushing four straight games while opposing offenses are 24 of 47 on third-down conversions.

“We’re doing everything we can to win these games. Unfortunately, it’s not going our way. We could sit here and complain and blame each other, but we’re not," Herbert said. "We’re going to watch film, as painful as it may be, and we’re going to get better, and all of those guys are going to show up because they’re professionals and they understand that this is a business, and they’re going to be at their best tomorrow.”

Special teams. Despite having to use three kickers due to injuries, the Chargers have made 18 straight field goals. DeAndre Carter is averaging 21 yards per kick return over the last two games.

Run defense. Kansas City rookie Isiah Pacheco had the 10th 100-yard game against the Chargers since the start of last season, which is tied with Detroit for the most in the league. Staley's defense is giving up a league-high 5.46 yards per carry. The highest per-carry average allowed over a full season since the merger was 5.35 by the 2013 Chicago Bears.

Joshua Palmer. Even with the return of Allen and Williams, Palmer has emerged as one of Herbert's top targets with eight receptions. The second-year receiver had the first two-touchdown game of his career and tied a career high with 106 yards.

The offensive line. The Chargers allowed five sacks after they came into the game surrendering only a league-low 13. Kansas City was able to generate 13 quarterback pressures along with allowing no gain or negative yards on 9 of 30 rushing attempts. The five sacks were the most that Herbert has taken in his three-year career.

Williams is questionable going into the week after re-injuring his ankle. TE Gerald Everett's (groin) status is also questionable after being inactive against the Chiefs. LB Kenneth Murray (neck stinger) is feeling better and RB Joshua Kelley (knee) could return to practice after spending time on injured reserve.

42. Games it took for Herbert to reach 12,000 career passing yards, which is tied with Kurt Warner for the second-fastest in league history. Patrick Mahomes was the quickest at 40 games.

The Chargers hit the road for the next two games. They have a 10-4 advantage in the season series against the Cardinals. including 3-2 in games played in Arizona.