Chargers' Herbert looks to bounce back after rough stretch 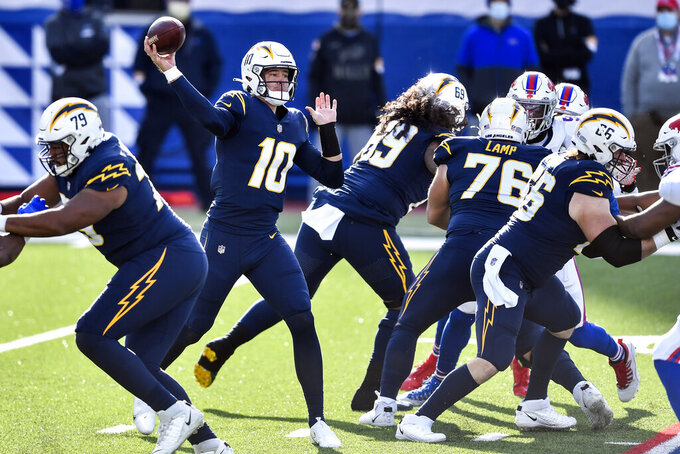 COSTA MESA, Calif. (AP) — Los Angeles Chargers rookie quarterback Justin Herbert is looking to show that his recent struggles are not a sign that opponents have figured out how to defend him. The good news is he's done facing AFC East defenses for the year.

Herbert goes into Sunday's game against the Atlanta Falcons fourth in average passing yards per game (293.1), but the past four games have been inconsistent with six touchdowns and four interceptions. Last Sunday's 45-0 loss to the New England Patriots marked the first time he has completed less than half his passes and he didn't have a touchdown pass.

The last two games have also been Herbert's lowest rated of the season. He had a 75.5 passer rating in a 27-17 loss to Buffalo on Nov. 29 and followed that up with a 43.7 against New England. Those games came after he threw for a career-high 366 yards with a 116.5 rating against the New York Jets on Nov. 22.

Even though Los Angeles (3-9) has faced teams that have defensive schemes that utilize more pressure packages, Herbert attributes the recent struggles to self-inflicted problems.

“I think that we’ve had a good game plan and we unfortunately go out there and don’t execute as well as we would have liked," he said on Wednesday. "Whether it’s on third down or second-and-long, it’s always on us to be better than that.”

Coach Anthony Lynn said Herbert and the offense need to do two things better over the final four games — get rid of the ball quicker and better pass protection. Herbert took an average of 2.75 seconds to throw last week, which was only the second time this season his average has been above 2.7 seconds. He also has been sacked three times in each of the past three games.

“We just have to do a better job of blocking and get back to getting the ball out on time, letting the covers dictate what the football should go,” Lynn said. “We've been trying to force the ball in certain places. We can max protect but at the end of the day we have to block the man that is in front of us, and we haven't done a very good job of that.”

Atlanta (4-8) has the league's fourth-worst pass defense, giving up an average of 285.3 yards per game. The Falcons had a stretch where they surrendered over 300 yards in six of seven games but they have held their last three opponents under 220 yards.

Atlanta's pass rush has experienced a resurgence with 10 of its 24 sacks coming in the past three games.

"They’re really fast, really quick and aggressive. They really fly around," Herbert said. “It’s a tough challenge for us, but a great opportunity for us to to go play some football.”

Notes: Lynn said he will be taking over special teams duties, marking the second staff change in two weeks. Lynn demoted George Stewart from coordinator to analyst on Nov. 25 and said Keith Burns would be taking over. ... RB Justin Jackson has been designated to return off injured reserve after missing the past four games due to a knee injury. ... CB Chris Harris Jr. (foot), RB Joshua Kelley (foot) and LB Denzel Perryman (back) did not practice.