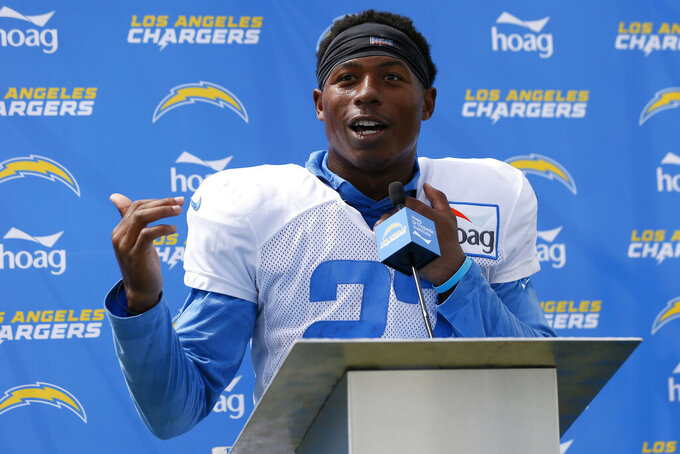 With a new coaching staff that matches his demeanor and a full offseason to work on his game, Kelley is even more upbeat going into his second year in the NFL.

“I feel really good,” Kelley said Friday. “I feel like we’ve been working. I love this staff, you know, love the energy, the excitement. I love this team. It’s been good to get out here, finally play some football. Put some pads on, get some hitting. It’s been a lot of fun.”

Drafted in the fourth round out of UCLA, Kelley was expected to back up incumbent Austin Ekeler. But when Ekeler pulled his hamstring in October, Kelley struggled in his absence. He rushed for just 137 yards on 50 carries in the six games when Ekeler was on injured reserve.

Kelley finished with 354 yards and two touchdowns on 111 attempts, and his 3.2 yards per carry average ranked last in the league among the 51 players with at least 100 carries last season. He also lost two fumbles and was a healthy scratch in two of the Chargers’ final four games, and Kelley said those struggles sapped him of confidence.

In addition to refocusing his mindset, Kelley had a complete set of workouts in the spring to refine his techniques and develop an understanding of new offensive coordinator Joe Lombardi’s scheme. Kelley has continued to improve during a more traditional training camp and expects to benefit even more from playing in preseason games, highlighting the contrast from how he had to prepare for last season.

“No, it makes a big difference ’cause I didn’t have OTAs. I didn’t have minicamp. I just came in during training camp. I didn’t have preseason,” Kelley said. “All this stuff we’re doing now, it’s big, man, ‘cause you get a playbook but it’s different than actual live reps. And we’re actually getting those reps, and it’s helping me out.”

Kelley also used that time to mesh with new coach Brandon Staley, Lombardi and running backs coach Derrick Foster. Their approach to football, from the 38-year-old Staley on down, matches Kelley’s personality.

“I think it’s just the energy, how useful they are,” Kelley said. “And also, you know, just how passionate they are about the game when they come out here. And for me, man, like that’s huge ’cause I’m like that, too. I’m being positive and I just feed off of that even more.”

Coming off their first workout in full pads Friday, Lombardi can really start to evaluate Kelley, fourth-year back Justin Jackson, and sixth-round draft pick Larry Roundtree III and determine how roles are defined behind the clear starter in Ekeler.

Lombardi, who had a “thunder and lightning” tandem in Alvin Kamara and Mark Ingram Jr. when he was coaching in New Orleans, is still trying to figure out how to divide up carries and catches out of the backfield.

Kelley did show his worth as a receiver, catching all 23 of his targets for 148 yards, and Lombardi has liked what he has seen from that part of his game.

“I wasn’t 100% sure what I was getting as a pass receiver, but he ran a couple really good routes and caught the ball. So far so good,” Lombardi said.

Kelley understands he won’t be an asset to any team as a one-dimensional back. That has also led him to improve as a special teams contributor, determined to give Staley, Lombardi and special teams coordinator Derius Swinton II as many reasons as possible to put him on the field.