Chargers starting to display depth at crucial time in season 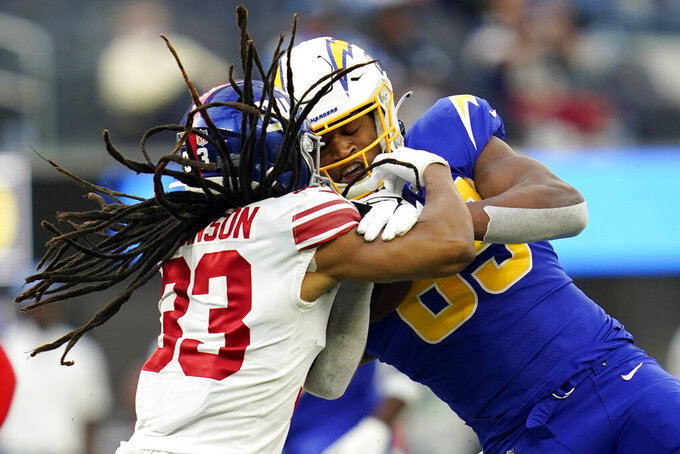 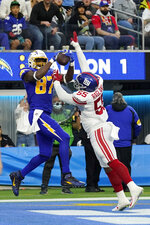 Besides remaining in prime position for an AFC playoff spot and winning consecutive games for the first time in two months, the Los Angeles Chargers showed during Sunday's 37-21 victory over the New York Giants that they might not be lacking depth after all.

“We had great opportunities for his teammates in the secondary to step up and rise to the occasion. I’m proud of those guys and how they played,” coach Brandon Staley said.

After relying mainly on Allen and Mike Williams for most of this year, the other receivers are starting to hit their stride at the right time. Staley said Palmer, drafted in the third round earlier this year, has done better on his releases off the line, while Guyton has regained his confidence after being lost in the shuffle.

“They have been on that mandatory with Justin (Herbert) after practice developmental process,” Staley said. “What that allows Justin to do is feel like, ‘Hey, I can throw it to this guy when it’s tight because I’ve got the time on task with him.’ I’m really proud of both of those guys because Justin’s a real hard guy to compete with. He really is. I’m excited about all of those guys.”

Both receivers will again be counted on going into Thursday night’s pivotal AFC West clash with the Kansas City Chiefs. The 8-5 Chargers surpassed last year’s win total by beating the Giants and are a game behind the Chiefs for the division lead. A win over Kansas City would give Los Angeles its first season sweep since 2012 and a huge edge in the tiebreaker.

The defense had a season-high 10 pass breakups even though safety Derwin James (hamstring) and cornerback Asante Samuel Jr. (concussion) were inactive. Cornerback Michael Davis had four breakups, tied with New England’s J.C. Jackson for the most by an AFC player this year and is the most in a game by a Charger since 2017.

Despite Dustin Hopkins making his three field goal attempts, special teams remain inconsistent. In the fourth quarter, Donald Parham had an onside kick bounce off his hands, allowing the Giants to recover, and Ty Long had a partially blocked punt.

Guyton has seven receptions for 177 yards and two touchdowns in the past two games. The third-year wide receiver caught a 59-yard bomb from Herbert late in the first half to extend the Chargers’ lead to 24-7. According to the league’s Next Gen Stats, the pass traveled 63.8 yards in the air, the second-longest completion in the league this season. It also had a completion probability of 17.1%, making this Herbert’s third TD throw this season to have a completion probability under 20%.

Running back Larry Rountree III was considered a short-yardage option this season, but the rookie was inactive for the third time and second in the past three games.

While Allen (reserve/COVID-19) and James (hamstring) are questionable for Thursday night, rookie left tackle Rashawn Slater’s status is doubtful after testing positive for COVID-19 on Monday.

2 — players on the defense with at least 100 tackles, marking the first time since 2000 the franchise has accomplished that. LB Kyzir White had 10 tackles on Sunday to get to 106, while James has 100.

The Chargers have won five of their last six games against the AFC West but have a seven-game home losing streak to the Chiefs.