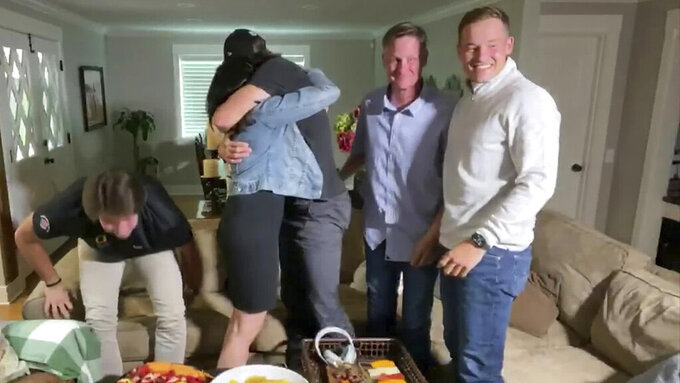 In this still image from video provided by the NFL, Justin Herbert, center right, celebrates during the NFL football draft Thursday, April 23, 2020. The Los Angeles Chargers selected Herbert with the sixth pick. (NFL via AP)

COSTA MESA, Calif. (AP) — Tom Telesco is hoping Justin Herbert can be just as good as the last quarterback the Chargers drafted out of Oregon.

Los Angeles selected Herbert with the No. 6 pick of the NFL draft Thursday night. He is the first Ducks QB taken by the Chargers since they took Dan Fouts in the third round in 1973. Fouts led the franchise to four playoff trips and three division titles in a 15-year Hall of Fame career.

“This is a special opportunity. Words can’t describe how excited and thrilled and fired up I am for this," Herbert said.

Telesco was not content with only one first-round pick, however. The general manager traded the team's second- and third-round picks to New England to move up to the 23rd spot to take Oklahoma linebacker Kenneth Murray. It is the first time since 2005 that the Chargers have had multiple first-round selections.

“We had talks with different teams in front of and behind us (when they were picking sixth),” Telesco said. “We got a player we really liked with Justin but also had some ammunition to move up and get Kenneth. All in all, it was a very rewarding day.”

The Chargers were in the market to take a quarterback in the first round for the fourth time since 1967 after they announced in early February that they would not re-sign Philip Rivers, who started 235 consecutive regular-season and playoff games over the past 14 seasons.

Herbert started 42 games at Oregon, compiling a 29-13 record with 10,541 passing yards and 108 total touchdowns. He led the Ducks to the Pac-12 championship last season and a win over Wisconsin in the Rose Bowl, where he ran for three touchdowns and was named the offensive MVP. He thew for 32 touchdowns and only six interceptions in 14 games.

Herbert has shown the ability to excel in play action, but questions remain about his decision-making and accuracy. He boosted his stock at the Senior Bowl, completing 9 of 12 passes for 83 yards and a touchdown.

Herbert said he has been trying to refine his mechanics leading up to the draft.

Telesco has had his eye on Herbert for a while. He was at the Los Angeles Memorial Coliseum on Nov. 2 when Herbert went 21 of 26 for 225 yards and three touchdowns in a 56-24 win over Southern California.

“He brings us a lot with his combination of physical skills and style of play is intriguing to us,” Telesco said. “He is a big, fast dual-threat quarterback with room to grow.”

There won't be any pressure for Herbert to come in and start immediately. Tyrod Taylor is likely to be the Chargers starter going into their first season at SoFi Stadium in Inglewood, giving Herbert time to learn and develop.

Fouts said in a telephone interview that the Chargers made the right choice with Herbert.

“He’s smart, big and has a strong arm. He’s fearless. He’s got all the tools you can imagine," he said. “The way I look at it he’s still young and the sky’s the limit. He's going to a team with a lot of talent at receiver (Keenan Allen and Mike Williams) along with a good tight end and running game."

Murray was a three-year starter at Oklahoma and lined up in the middle. He played nearly 91% of the Sooners' defensive snaps the last three years and recorded 100 or more tackles the last two seasons. He also had 9.5 sacks and 37 tackles for loss during his career.

“He's someone who we had graded very high and can play all the linebacker spots,” Telesco said. “He is long, fast, physical and plays with a violent mentality.”

Murray does project more as an outside linebacker but gives the Chargers a run stopper they have been lacking the past couple seasons. He is the first Sooners linebacker since Jackie Shipp in 1984 to go in the first round of the regular draft.

The Chargers met with Murray during the combine, but he was still surprised they moved up to get him.

“I was recruited to be a pass rusher, but I have the versatility to play inside or outside,” he said. “I've improved in my coverage skills as well as being a better player in space all three years.”

The Chargers' next pick won't be until the fourth round on Saturday. Offensive line remains a glaring area of need, particularly at left tackle.