Commanders draft for immediate help except for QB Sam Howell 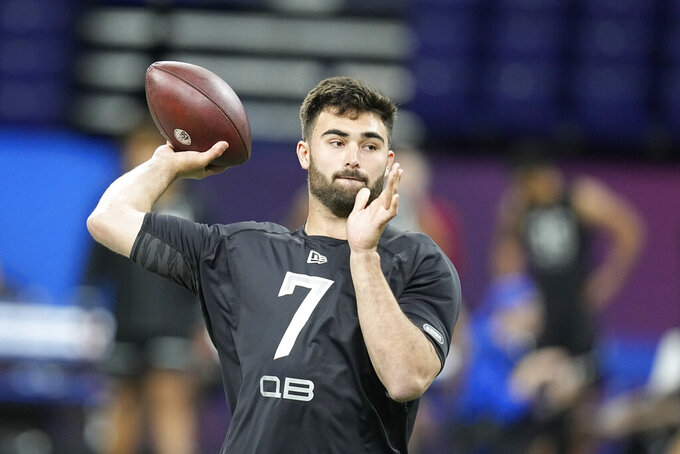 ASHBURN, Va. (AP) — Sam Howell understands he isn’t expected to start his rookie year in the NFL after the Washington Commanders stopped his slide by taking him in the fifth round of the draft Saturday.

The rest of the team’s draft picks can’t say the same thing.

With the exception of selecting Howell as a developmental quarterback prospect, the Commanders went for immediate help in the draft going into a season they expect to take a major step forward. From first-round receiver Jahan Dotson to second-round defensive tackle Phidarian Mathis and third-round running back Brian Robinson Jr. to most of the players taken on Day Three, this was about Washington finding pro-ready prospects who can step in and contribute right away.

“It’s always good to have guys that you can plug in and get some contribution from,” coach Ron Rivera said. “We feel like we’ve got guys that can come in and help impact what we’re doing on offense or defense and that they can also contribute on special teams if they had to.”

The entire offseason has been about winning sooner than later. Rivera and the front office made that clear in acquiring Carson Wentz from Indianapolis.

Two big goals of the draft were getting playmakers and protection for Wentz. Dotson, Robinson and Nevada tight end Cole Turner (taken five picks after Howell in the fifth round) give Wentz more options and seventh-round offensive lineman Chris Paul fits into the protection puzzle.

Every player Washington took except for Howell played at least four seasons of college football.

“You like to see a good play history when you look at guys stats and look at their production over their college careers,” general manager Martin Mayhew said. “It’s something that we like to see.”

Their final pick, Oklahoma State cornerback Christian Holmes, turns 25 in September. Paul turns 24 in August. Even Mathis is only 11 months younger than 2018 first-round pick Daron Payne, who he could replace on the defensive line sooner or later.

Getting Howell, at one point considered the top QB in the class and projected to go much higher, with the first pick in the fifth round may turn out to be the steal of this draft. A disappointing final season at North Carolina tanked his stock, but now he’ll get the chance to develop behind Wentz and backup Taylor Heinicke.

“I have so much respect for Carson and everything he’s done in his career, and I’m excited,” Howell said. “I get to go to a place where I can kind of sit back and learn, learn from a guy and just see what it’s like to be a pro.”

Being a fifth-round pick also takes some pressure off Howell, who was the sixth QB taken in a class regarded as one of the weakest at the position in years. Rivera said Washington thought highly of Howell but was not going to take him in the first four rounds because of Wentz’s presence.

Rivera called Wentz to reassure him taking Howell was a long-term move and Taylor Heinicke remains the backup going into next season.

“He’s our No. 1 going forward,” Rivera said of Wentz. “He just appreciated the fact that I gave him the heads-up. He was actually pretty excited because he’s heard a lot of good things about Sam.”

Rivera unprompted singled out Turner as a player who could contribute right away and said the Nevada tight end reminded him of Greg Olsen, who played nine years for him with Carolina. The Commanders spotted Turner while watching video of QB Carson Strong, and Turner stuck out for the catches he was able to make.

“When you watch the tape and you watch his catch radius, it’s really, really impressive,” Rivera said. “You saw a tremendous catch radius from a tight end.”

Mayhew went into the week wanting to add extra draft picks, especially after spending from that pool to get Wentz from the Colts. Trading down from the 11th pick to 16 in the first round and making another move Saturday netted the Commanders Dotson, Robinson, Howell and Turner.

“I thought it worked out well for us overall,” Mayhew said. “You don’t always get what you want every single time. Sometimes you’re moving back and you’re looking at different charts and values and it’s not exactly what you want, but it’s what you need to do as a football team to try to get better.”