With Cousins out for COVID protocol, QB shortage irks Zimmer 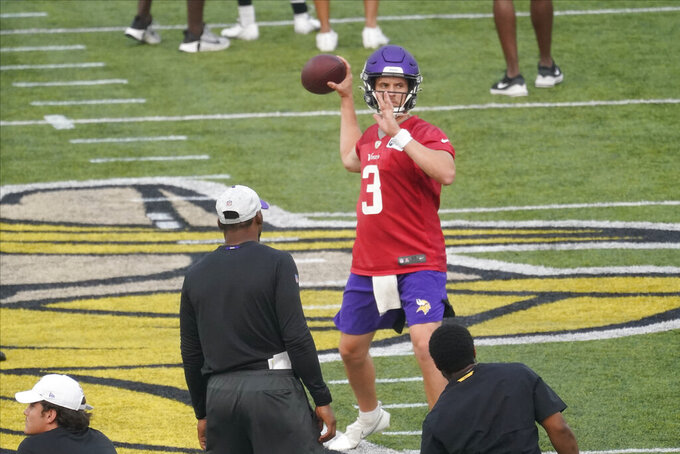 EAGAN, Minn. (AP) — Minnesota Vikings head coach Mike Zimmer has expressed confidence in the strength of his team's chemistry to supersede any potential tension between players vaccinated for COVID-19 and holdouts who've so far preferred to remain unvaccinated.

Frustration from the starting quarterback missing practice due to NFL virus protocols prompted Zimmer to ponder the possibility of this becoming a regular season problem or rift, with Kirk Cousins sidelined for a third straight day from team activity.

Cousins and backups Kellen Mond and Nate Stanley were placed on the reserve list for COVID-19 after their required absence from practice on Saturday left third-year player Jake Browning as the only other quarterback on the roster. The Vikings then signed Case Cookus for emergency help prior to practice on Monday and also claimed Danny Etling off waivers from Seattle.

Quarterbacks coach Andrew Janocko and offensive coordinator Klint Kubiak have even been solicited for warmup throws to help lighten the load on Browning, who was playfully doused with water by teammates once the session on Saturday was over. Browning said Cousins sent him an encouraging text message after his crisp performance.

Browning has been vaccinated, which ought to help his cause in the competition for the No. 2 spot on the depth chart.

“I just made a personal choice, and now everybody knows that personal choice,” said Browning, who was undrafted out of Washington and spent two years on the practice squad. “I’m not looking to get in the middle of all those different conversations. It’s kind of hectic.”

Cousins has declined to answer questions from reporters this summer about his vaccination status, but being sidelined this week has made clear he has not been vaccinated.

According to a person with knowledge of the situation, speaking to The Associated Press on condition of anonymity because NFL and NFL Players Association protocols were designed to keep player COVID-19 information private, Cousins has been out as a high-risk close contact. Mond tested positive, NFL Network reported.

If an unvaccinated player tests positive this year, he must isolate for 10 days and be asymptomatic before rejoining the team for in-person work. Unvaccinated players face a five-day quarantine period after close contact with an infected individual, until they can be cleared by a negative test. Those are 2020 rules.

Among the changes to protocols in 2021 to incentivize getting the COVID-19 shots, vaccinated players don't have to quarantine for close contact with an infected person. They can also return to action as quickly as two days after a positive test.

The unvaccinated players are still required to wear masks inside and can't eat with the rest of the team or leave the hotel on the road.

Last week, the league reported that about 88% of players have received at least one dose of the vaccine, far greater than the general public rate.

“I just don’t understand. I think we could put this thing to bed if we all do this,” Zimmer said.

With the Vikings entering a pivotal season in Zimmer's eight-year tenure, not to mention for Cousins and his future after Mond was drafted in the third round, there's plenty of urgency around making the playoffs and more.

Wide receiver Adam Thielen and safety Harrison Smith are two other star players who had not been vaccinated when asked about their status earlier this summer, but nobody holds the keys to the season like the quarterback.

The situation with Cousins is part of why Zimmer has not hidden his irritation, which has become the early theme of camp. The other reason for his public discouragement is the spread of the delta variant around the country that has caused cases to spike in several states.

“These guys, some of them just won’t do it,” Zimmer said. “I shouldn’t say it, but some of the things they read is just, whew, out there. I don’t know if it’s misinformation. It’s their belief, so whatever they’ve heard or read or been told.”

Cousins has long been outspoken about his faith, and anti-vaccine sentiment runs strong in some Christian circles. Last year, on a podcast appearance, Cousins took heat for expressing a rather cavalier take — he later apologized for the insensitivity — about his miniscule level of concern regarding COVID-19 infection.

“Even if I die, I die. I kind of have peace about that,” Cousins said then.

Zimmer said the Vikings might decide to keep one quarterback out of all of their meetings, as some teams around the league did last season to avoid the type of trouble Denver experienced when virus protocols forced all four of their quarterbacks out for a Nov. 30 game against New Orleans. Practice squad wide receiver Kendall Hinton was promoted to try to hold down the fort.

Cookus played at Northern Arizona from 2015-19. Etling was a seventh-round pick out of LSU by New England in 2018.

Wide receiver Myron Mitchell, an undrafted rookie from UAB, was also placed on the COVID-19 reserve list. The Vikings placed wide receiver Bisi Johnson on injured reserve after the third-year player in competition for the No. 3 spot suffered a season-ending ACL tear in his knee last week.