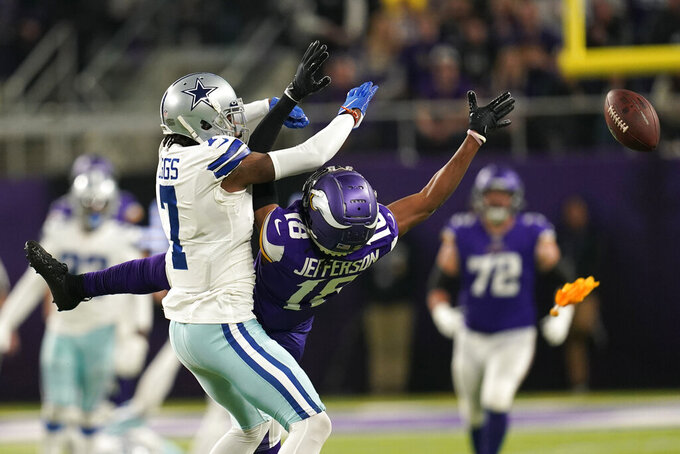 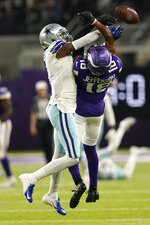 MINNEAPOLIS (AP) — For all their setbacks over the first six weeks, whether self-inflicted or unlucky, the Minnesota Vikings emerged from their bye in a favorable position.

They were settled to play Dallas in their cacophonous stadium Sunday for their first prime-time game since before the pandemic. Cowboys quarterback Cooper Rush was making his first NFL start because star Dak Prescott sidelined by injury. The Vikings had control of the third wild-card spot in a weak group of competitors beyond the NFC's clear top six teams.

The offense cruised into the end zone in seven plays on the opening drive, an early suggestion the Vikings would enjoy a stress-free game for once. The Cowboys were allowed the second-most yards per play in the league entering the week.

Then this well-paid group, with Kirk Cousins protecting the ball better than ever and the star trio of running back Dalvin Cook and wide receivers Justin Jefferson and Adam Thielen at his disposal, mostly stalled on the way to an ugly 20-16 defeat.

“We needed a win,” Cousins said. “To not get it done is disappointing.”

The Vikings (3-4) converted only one of 13 third downs, a 7.7% success rate that ranks as the worst by any NFL team in a game this season, according to Sportradar data.

“They were switching up coverages. They were doing some stuff that wasn’t really scouted, I guess you could say, in trying to take away things that we do well, and they had a good game plan for that,” Thielen said. “But I still think everyone’s got to kind of look at themselves, and say, ‘What could I have done to win?’”

The offense has produced several winning halves in the seven games this year, still searching for a complete performance that can put away an opponent instead of leaving the closing stretch in the balance. Against the Cowboys, the Vikings didn't even thrive with the ball for a full half.

Whether due to play-calling, pass rush, tight coverage or overcautious decisions by Cousins, their most obvious limitation was a dearth of deep completions to Jefferson, Thielen or K.J. Osborn. The only third down conversion came on the first drive, a leaping 31-yard catch by tight end Tyler Conklin along the right sideline.

Every other pass attempt on third down was short of the sticks, incomplete or not. Fullback C.J. Ham had more receptions (three) than Jefferson (two), an unforgivable statistic in a game such as this.

“It’s not like we don’t have those things that we’re planning on doing. It’s just something where they’re not working,” coach Mike Zimmer said.

The pass rush was working well, but that's in danger with the devastating news that defensive end Danielle Hunter will miss the remainder of the season with a torn pectoral muscle. The Vikings lead the NFL in sacks per pass attempt, and they had three quarterback takedowns on Sunday. Safety Xavier Woods caused a fumble by Rush with his, and linebacker Eric Kendricks also got home on a blitz. Everson Griffen forced a punt by sacking Rush at the 8-yard line.

The improved secondary, with four new starters fetched in free agency this year, allowed Dallas to pass for 360 yards and looked more like the depleted unit that limped through 2020. Cornerback Patrick Peterson was badly missed with his hamstring injury, but Bashaud Breeland, Cameron Dantzler and Mackensie Alexander all had their share of blown coverages and missed tackles.

Woods not only had his first career sack against his former team, but also a forced fumble, an interception, a pass breakup and eight tackles.

Right guard Oli Udoh struggled along with the others on the interior against the Dallas front. He was called for holding on consecutive plays in the fourth quarter. Both penalties were declined.

4.2 — According to NFL Next Gen Stats, Cousins averaged 4.2 intended air yards per attempt, the second lowest of any NFL quarterback this week.

Without Hunter, Peterson and defensive tackle Michael Pierce — who sat out for a third straight game with an elbow injury — the Vikings showed their vulnerability against the Cowboys in the second half. Wide receiver/punt returner Dede Westbrook didn't play because of an ankle injury.

The Vikings have to figure out who else they can rely on to take Hunter's turns at defensive end beyond the 33-year-old Griffen. D.J. Wonnum has made little impact this season but will only see his playing time increase now. Kenny Willekes and rookie Patrick Jones II, who sat out against the Cowboys with a knee injury, are the only others currently on the roster.

The Vikings face — gulp — quarterbacks Lamar Jackson, Justin Herbert and Aaron Rodgers in their next three games. That's the 2019 NFL Most Valuable Player, the 2020 NFL Offensive Rookie of the Year and the 2011, 2014 and 2020 NFL MVP.