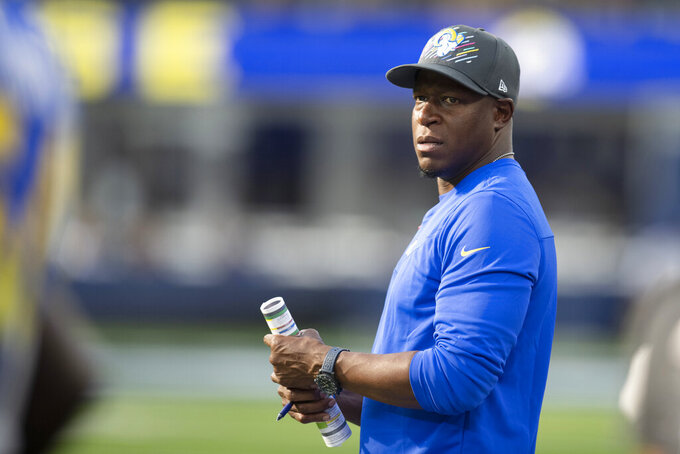 FILE - Los Angeles Rams defensive coordinator Raheem Morris watches players prepare for an NFL football game against the Arizona Cardinals on Oct. 3, 2021, in Inglewood, Calif. Morris is facing the Atlanta Falcons on Sunday just over one season after he led them for 11 games as their interim head coach. (AP Photo/Kyusung Gong, File)

SANTA CLARA, Calif. (AP) — The play-calling head coaches get lots of the attention around the Los Angeles Rams and San Francisco 49ers.

But the success that Sean McVay and Kyle Shanahan have had as coaches in Los Angeles and San Francisco has had as much to do with the play of their defenses.

Those performances have made the coordinators of the two units among the more prominent candidates for head coaching jobs soon with the Rams' Raheem Morris looking for a second shot at a full-time job and the Niners' DeMeco Ryans looking for his first.

But before the coaching carousel starts up again there are more immediate focuses with the two coordinators and teams vying for NFC West supremacy heading into Monday night's showdown between the Rams (2-1) and 49ers (1-2).

For Ryans, the challenge will be devising a defense to slow down Matthew Stafford and Cooper Kupp.

"Those guys are always in sync and they’re always on the same page, which makes it tough as a defense to defend those guys because they’re so good, they’re so precise at what they do that they make it a really tough challenge,” he said.

For Morris, the challenge will be dealing with the diverse run game from Shanahan that can turn the smallest of mistakes into a game-changing play.

“The mental stamina it takes to get those things done, that’s the type of game it is,” Morris said. “That’s what I mean by it’s Niner week. All of those things matter, all those things will be in play.”

Ryans has made a rapid rise up the coaching ranks following a stellar, 10-year career as a linebacker in the NFL. He has risen from a quality control coach in San Francisco in 2017 to inside linebackers coach the following year to defensive coordinator the past two.

His ability to design a defense, motivate and teach his players, and know the right moments to make a call has helped San Francisco rank in the top five the past two seasons in yards per play allowed (4.94) and points per game allowed (20.1).

“I knew immediately after about a month being around him that he was going to be a special player and got some special talents as a leader," Holland said. “It’s not a big surprise what he’s doing. He’s such a sharp guy, a leader and a lot of energy and understands people. So the sky’s the limit for him. He’s going to do very well and eventually he’s going to be a head coach.”

Ryans has devised a defense that has made life difficult on Stafford and the Rams and might have been good enough to get to the Super Bowl last season had Jaquiski Tartt held onto an interception.

With a fearsome pass rush led by Nick Bosa that is able to get pressure without blitzing, the Niners made life difficult for Los Angeles last season.

“They’re really complete,” Stafford said. "They do a great job of affecting the quarterback in the pocket, do a great job of stopping the run, keeping a roof on the defense. Nobody’s really gotten behind the safeties so they do a really nice job of that. Really well-rounded defense, super physical, really well big challenge for us.”

Ryans had his first opportunity to interview for a head coaching job last offseason, but pulled out of consideration in Minnesota to remain in San Francisco.

Morris was also a candidate for that job as he hopes to one day get a second chance after a failed three-year run in Tampa Bay from 2009-11.

Morris got a shot as interim coach in Atlanta in 2020, but his work with the Rams as coordinator the past two years has raised his stock as he has helped get the most out of stars such as Aaron Donald and Jalen Ramsey to help Los Angeles win the Super Bowl last season.

Shanahan, who worked with Morris in Tampa Bay and Washington, said the way Morris moves his star players such as Donald, Ramsay and linebacker Bobby Wagner around makes life difficult on offenses.

"It’s just switching people up, testing your rules, all that stuff, which is tough when they have those guys out there, how they mix it up,” he said.