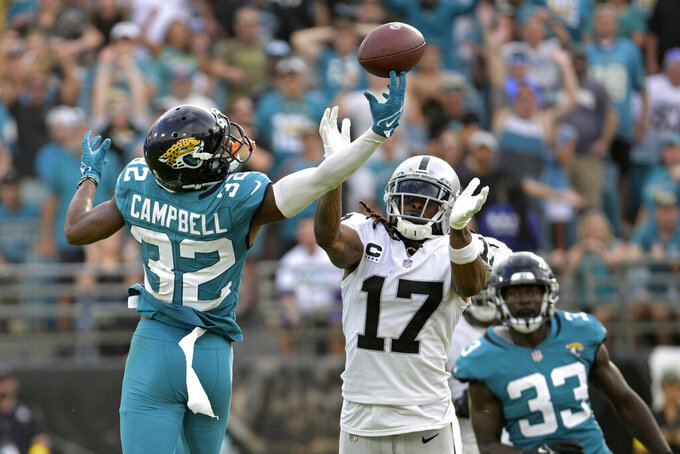 TURNOVER DIFFERENTIAL: Colts minus-8; Raiders minus-2.

COLTS PLAYER TO WATCH: QB Sam Ehlinger. It’s been a wild ride for the new starter. He replaced the benched Matt Ryan in his starting debut. His second start came the week offensive coordinator Marcus Brady was fired and running back Nyheim Hines was traded. This week, he’s working with a new coach and a new play-caller. It’s a lot to ask of the 24-year-old Texan, and it will be interesting to see how he responds.

RAIDERS PLAYER TO WATCH: WR Davante Adams. He was clearly unhappy with the play-calling in Sunday's loss at Jacksonville, going from nine catches for 146 yards and two touchdowns in the first half to one reception for zero yards in the second 30 minutes. But Adams was targeted eight times in the second half, so he wasn't completely ignored. The Raiders need a more complete game out of their star receiver.

KEY MATCHUP: Colts LT Bernhard Raimann vs. Raiders DE Chandler Jones. It's a demanding assignment for the rookie offensive lineman, but who received a vote of confidence from Saturday. Jones could use his own confidence boost that he has just half a sack this season. But he had 10 1/2 last season at Arizona and certainly is capable or breaking loose at any time.

KEY INJURIES: Injuries have taken a backseat amid all this week’s turmoil in Indy. But the biggest question is centered on defending rushing champ Jonathan Taylor. He sat out last week after reinjuring his ankle, and his status for Sunday remains unclear. The other concern is rookie TE Jelani Woods, who came out of last week’s loss with a shoulder injury. ... Raiders TE Darren Waller (hamstring) and WR Hunter Renfrow (hamstring and ribs) were placed on injured reserve. LB Blake Martinez retired. LB Denzel Perryman (hips and ribs) did not practice Wednesday. LB Darien Butler (hip) and WR Keelan Cole (knee) were limited in practice.

SERIES NOTES: The Raiders and Colts have alternated victories over the past six games. ... Las Vegas’ victory last season was the first of two that eliminated the Colts from the playoffs. ... Indy won in its only previous trip to Allegiant Stadium in 2020. ... Las Vegas coach Josh McDaniels initially accepted Indy’s coaching job in 2018 before backing out of the deal. The Colts then hired Frank Reich, who was fired Monday. ... The Raiders’ come-from-behind road win in Week 2 of the 2000 season came on the same afternoon three-time national champion coach Bob Knight was fired by Indiana University.

STATS AND STUFF: The Colts have lost three straight and are 2 1/2 games behind Tennessee in the AFC South. ... Interim coach Jeff Saturday will make his NFL coaching debut following the firing of Frank Reich on Monday. ... Ehlinger was sacked nine times last week and is playing behind an offensive line that has allowed a league-high 35 sacks this season. ... Taylor has one touchdown this season, none since Week 1. ... Indy’s quarterbacks are ranked fourth in the league in completions (235) and passing attempts (349). ... The Colts were 0 for 14 on third-down in last week’s loss at New England. ... Grover Stewart (48) and DeForest Buckner (38) are both ranked among the league’s four top tacklers among defensive tackles. ... Indy’s defense has a league-high 28 negative plays on running calls this season. ... Opponents are converting just 33.1% of their third downs, fifth in the NFL. ... The Raiders went 0-2 on their most recent road trip, losing at New Orleans and Jacksonville. Instead of putting themselves in playoff position, the Raiders dropped to 2-6, last place in the AFC West. ... Daniel Carlson has made 41 consecutive field goals, the league's longest active streak and third longest in NFL history. ... Josh Jacobs is one rushing touchdown from becoming the 15th player in NFL history with at least seven rushing TDs in each of his first four seasons. ... Las Vegas is tied for second with Dallas and Tampa Bay with seven giveaways. Philadelphia, with three, is first.

FANTASY TIP: Raiders RB Josh Jacobs. It's likely Raiders coach Josh McDaniels relies more on Jacobs after going away from him the past two games. Jacobs rushed for at least 143 yards in three consecutive games before that as Las Vegas played its best football of the season.