DoorDash to the NFL: How 2 Washington players made ends meet 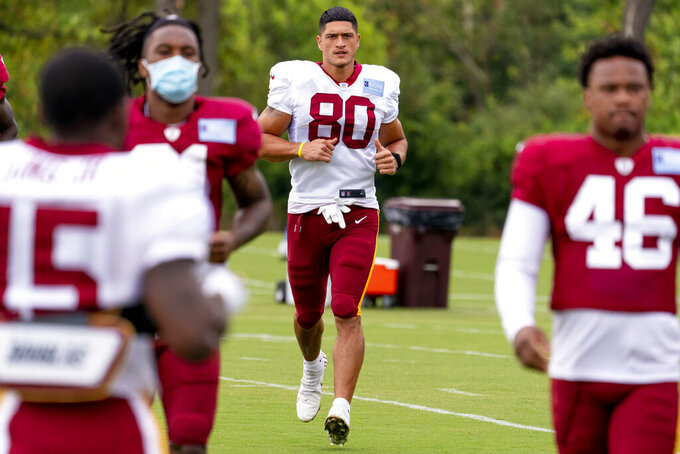 ASHBURN, Va. (AP) — Sammis Reyes got in his car, put on podcasts and tried to learn something while he was driving. Sam Cosmi borrowed his sister's car to make the most out of the mileage.

The destination was a stranger's front step.

Long before they became Washington Football teammates, Reyes and Cosmi each drove for a food delivery service during the pandemic. Taking a job like that certainly was not unique to athletes, though it shows how far they were willing to go to make ends meet before getting to the NFL and the ensuing payday.

"In this life, you’ve got to do what you’ve got to do to get the end goal," Reyes said Wednesday. “That was the only job that gave me the flexibility for me to still train. I had to figure out a way to make money, to be able to work out a couple times a day, so that’s what it was.”

Cosmi, like Reyes, found a way to drive for DoorDash and also delivered groceries for Instacart in between meetings and film study at Texas. The 6-foot-6, 309-pound offensive tackle's size stood out to grocery delivery customers who greeted him, often asking why he was doing it if he had sights set on a football career.

“Something to do,” Cosmi told them. “I couldn’t really stay in the house. I did all my workouts and studies and meetings and the rest of the day I fit in just working and doing something. I just couldn’t sit in the house and not doing anything. It’s just not me. It was just a little way to get a little extra dough in the pocket.”

Reyes, who's from Chile and moved to the U.S. as a teenager to play basketball, did it because his hoops training gig disappeared with COVID-19 preventing folks from working with him in person. Far removed from a brief college basketball stint at Tulane, he drove around Northern Virginia attempting to pay his bills and make some good impressions along the way.

“When you’re providing a service, people will take care of you,” Reyes said. “Getting those good tips at times, that was great. I would make sure I would send a text to all of my clients and all of the customers and just trying to be nice and kind to people and that paid off."

Reyes tries to maximize his time by multitasking; hence the business, football and other podcasts serving as his soundtrack behind the wheel.

With his sister's Camry getting him from place to place, Cosmi went through some adventures.

“The app crashed one time while I had three peoples’ food and I didn’t know what to do, so I was in the store for about three hours just waiting for it to come back on,” he said. "There were some good times and bad times.”

This time around, they're together at Washington's training camp. Cosmi was a second-round pick in the draft who's competing to start at right tackle, while Reyes signed out of the NFL International Player Pathway Program.

Coach Ron Rivera said Reyes and Cosmi taking food delivery jobs “tells you that they’re serious about trying to accomplish their goal — and that’s what you want.” Cosmi looks like a major part of the team's future, and Reyes could join him on that path once he's 100% after tweaking his right knee during a drill this week.

Cosmi, as the 51st pick, signed a $6.25 million, four-year contract, and Reyes got $2.45 million over three seasons, so neither player will likely need to go back to DoorDash anytime soon — unless they're bored and want something to do.

When Reyes needed the money just to get by, he approached it like his work ethic on the field.

“You get what you put into it,” he said. “You want to drive for hours, you can do it. It’s your schedule, you create the time, so if you need more money, you’ve got to just drive more."