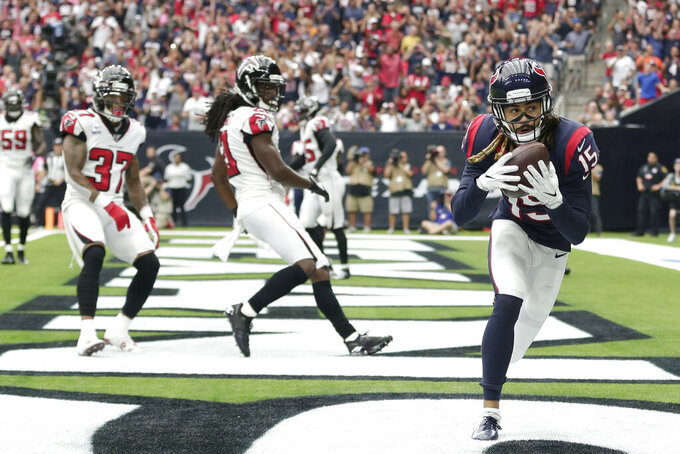 Houston Texans wide receiver Will Fuller (15) catches a pass for a touchdown against the Atlanta Falcons during the first half of an NFL football game Sunday, Oct. 6, 2019, in Houston. (AP Photo/David J. Phillip)

HOUSTON (AP) — Atlanta's secondary couldn't do anything to contain Houston's Deshaun Watson on Sunday as the third-year quarterback finished with as many touchdown passes as incompletions to send the Falcons to yet another loss.

Watson threw for a career-high 426 yards and tied his personal best with five touchdown passes, including three to Will Fuller to lead the Texans (3-2) to the 53-32 win.

"It's disappointing," outside linebacker Vic Beasley said. "I played a role in it that and you have to accept it for what it is and just continue to learn from it."

The Falcons (1-4) led by a point at halftime, but allowed Watson to throw for 261 yards and three scores after that as Houston pulled away to send them to their third straight loss.

"Those explosive plays just can't be a part of it," Falcons coach Dan Quinn said. "That was one of the catalysts that gave them the energy in the third quarter."

Watson, who was criticized for failing to complete any deep passes last week against the Panthers, had no such trouble on Sunday when he completed multiple passes for 25 yards or more. His favorite target was Fuller, who had a career-high 217 yards receiving to more than double his output from the first four games combined on Sunday after entering the day with 183 yards receiving.

A frustrated Quinn seemed as if he might consider personnel changes after his team's performance on Sunday.

"We'll obviously look into everything in terms of how we played," he said. "There's no excuse for having a performance like that."

Houston got things going in the second half when Watson hit Keke Coutee on a 51-yard catch-and-run. The Texans regained the lead four plays later when Carlos Hyde scored on a 1-yard run to make it 23-17.

The Texans tacked on a field goal later in the third before Darren Fells caught an 8-yard touchdown pass from Watson to extend the lead to 33-17. Watson completed two long throws on that drive, finding Fuller for a 32-yard gain before connecting with DeAndre Hopkins for 29 yards.

Safety Ricardo Allen said everyone on the defense needs to be better to turn things around.

"It's been inconsistent," he said of their play. "It just wasn't good. It wasn't good at all."

DeAndre Carter muffed a punt on the first play of the fourth quarter and it was recovered by Atlanta.

The Falcons cashed in on that mistake when Matt Ryan crashed into the end zone for a 1-yard score with about 11½ minutes left. It was first ruled that he fumbled, but it was reviewed and determined that Ryan got into the end zone before fumbling to give Atlanta the touchdown. Ryan found Austin Hooper for the 2-point conversion to cut the lead to 33-25.

Atlanta cut the lead to eight points with about 11½ minutes to go before Watson's second TD pass to Fells pushed the lead to 40-25 about five minutes later.

The Falcons cut the lead to one score again with 3½ minutes left when Ryan threw a 29-yard pass to Calvin Ridley to get them within 40-32. But Watson and Fuller struck again, with Fuller grabbing a 44-yard touchdown reception to make it 47-32 with about two minutes remaining.

"There's a number of reasons why we haven't played as well as we should," Ryan said. "I think everybody needs to take a look in the mirror and take ownership for what you're doing. That's a good way for all of us to improve, collectively."

The Texans added another score when Tashaun Gipson returned an interception 79 yards for a touchdown in the final minute.

"That was a tough one," Ryan said. "To sit here 1-4 after five games is difficult. It's not what we wanted, but we're going to be the ones to have to dig ourselves out of it."