FANTASY PLAYS: Players to start and sit for NFL Week 16 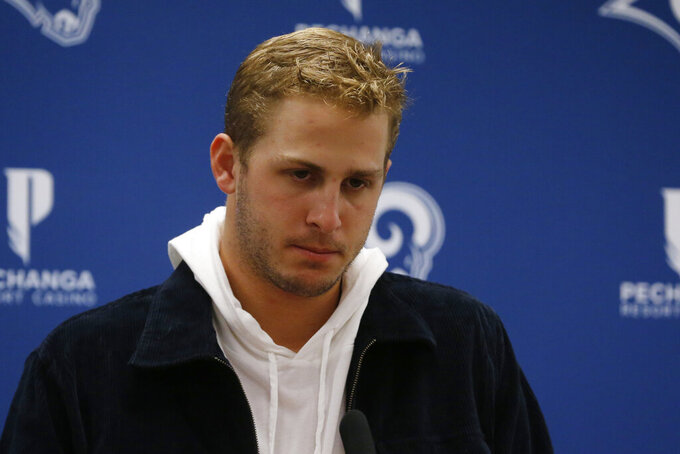 All of the mock drafts, bold middle round picks and brilliant waiver wire selections — along with a little luck — have brought fantasy teams to Week 16. Championship week has arrived, concluding another regular season that results in a year of bragging rights for the last teams standing.

There is room for creativity, but most teams will simply dance with the lineups that allowed them to get to this point.

START: Jameis Winston, QB, Buccaneers: Throw caution to the wind regarding Winston’s penchant for interceptions. He’s thrown for at least 300 yards in 10 of his last 12 games and has tossed eight touchdown passes over his past two contests. He gets a Saturday start at home against a Texans defense that allows the second-most fantasy points to opposing quarterbacks along with 30 touchdown passes. Play. Him.

SIT: Jared Goff, QB, Rams: His late push in garbage time against the Cowboys salvaged what had been a miserable day for him and his fantasy owners. Goff is a strong sit versus the 49ers defense that held him to 78 yards in an embarrassing Week 6 outing and remains the league’s stingiest defense in passing yards allowed.

START: Joe Mixon, RB, Bengals: Last week’s surprising 136-yard effort against the Patriots was Mixon’s third 100-yard game since Cincinnati returned from its Week 9 bye. The Bengals’ run-first mindset makes Mixon a great RB1 play when he suits up against the Dolphins, who have allowed the second-most rushing yards in the league and is the sixth-worst in fantasy points allowed to opposing backs.

SIT: David Johnson, RB, Cardinals: He’s finished, at least for this season, as a featured back. Johnson wasn’t targeted last week and played caddie to Kenyan Drake, who scored four touchdowns and rushed for 146 yards. Johnson’s few fantasy owners holding hope for a Week 16 miracle will be — as they were most of the season — disappointed.

START: Courtland Sutton, WR, Broncos: Only twice this season has Sutton failed to record at least one reception of more than 20 yards. He’s coming off a season-high 10 targets in last week’s loss at the Chiefs and would be devastatingly good if Drew Lock can give him double-digit looks against a Lions defense that’s third-worst in fantasy to opposing receivers while also yielding the second-most passing yards in the league.

SIT: Robby Anderson, WR, Jets: Anderson’s recent spurt of production will hit a brick wall against the Steelers, who allow the fifth-fewest passing yards in the league. Pittsburgh also leads the league in turnovers and will likely add to the total against Jets QB Sam Darnold.

START: Hunter Henry, TE, Chargers: For some reason, Henry has become a forgotten man in the Los Angeles offense, managing a combined six catches for 78 yards in the past three games. Expect the trend to come to an end as Henry lines up against a very TE-friendly Raiders defense that allows the fourth-most fantasy points to opposing players at the position.

SIT: O.J. Howard, TE, Buccaneers: Howard remains in a timeshare with Cameron Brate, which negates his upside against a Texans defense that has allowed the seventh-most fantasy points to opposing tight ends. He hasn’t scored a touchdown since Week 10 and has just one game of more than 10 fantasy points this season, making Howard more bust than boom.

START: Miles Sanders, RB, Eagles: Over the past three games, Sanders has averaged 22 touches from scrimmage and has become the focal point of a banged-up Eagles offense. Even with Jordan Howard expected to return, Sanders is a solid must-start (especially in points-per-reception formats) in a winner-take-all showdown against NFC rival Dallas.

SIT: Tom Brady, QB, Patriots: The passing yards are no longer there for Brady, who has thrown for fewer than 200 yards in three of his last four games. Brady completed less than 50% of his passes and managed only 150 yards during a Week 4 win at the Bills, and it’s hard to envision him doing much better than that when he faces Buffalo’s third-ranked pass defense on Sunday.

START: Terry McLaurin, WR, Redskins: McLaurin and fellow rookie Dwayne Haskins have established a solid rapport, combining for nine catches for 187 yards and two touchdowns over the last two weeks. The budding WR/QB combo will continue its rise at the expense of a Giants pass defense that has given up the sixth-most fantasy points to opposing receivers.

SIT: Carlos Hyde, RB, Texans: Hyde struggled on the ground in his previous four games before breaking off 104 yards and a touchdown in last week’s win over the Titans. Don’t count on Hyde maintaining that level of production, as he will have to grind his way against the Buccaneers, who lead the league in fewest rushing yards allowed and are second toughest in fantasy against opposing running backs.

START: Ryan Tannehill, QB, Titans: Tannehill has thrown at least two touchdown passes in seven of his last eight games and his running ability makes him a threat to add another score or two. The Titans could find themselves having to play from behind against the Saints, a scenario his fantasy owners would love to see.

SIT: Mitchell Trubisky, QB, Bears: He’s thrown at least one interception in each of his last five games and has struggled in the red zone over the past month. Trubisky will likely get his share of yards, but the Chiefs’ defense has improved its fantasy numbers against opposing quarterbacks, coming into this week as the 10th best in that category.

START: Tyler Higbee, TE, Rams: Higbee has suddenly become Jared Goff’s security blanket, recording three straight 100-yard games while pulling in 26 receptions in that span. The 49ers are third in fewest fantasy points allowed to opposing TEs, but the Rams will be dedicated to getting the ball into Higbee’s hands.

SIT: John Brown, WR, Bills: There’s no question QB Josh Allen will take a shot or two in Brown’s direction, but it will be a daunting task doing so against the Patriots, who allow the fewest fantasy points to opposing receivers. Brown had 11 targets in the first meeting against New England but managed just 69 yards on five catches in the Week 4 loss.