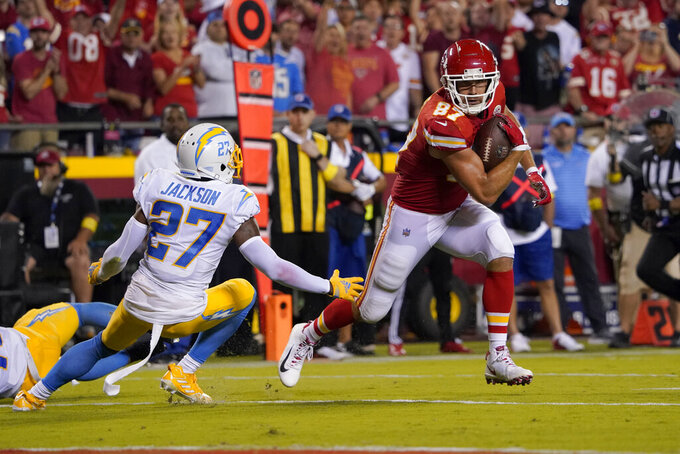 The Strong Start tier, Tier 1, has eight passers this week. Odds are that you aren’t relying on streamers too often this week.

However, if you don’t have one of those top eight or are considering streaming, you’re in good shape for Week 3.

Justin Fields is a strong fantasy option, given his potential on the ground. Fields has averaged 9.5 rush attempts for 24.0 yards, and the Houston Texans haven’t been tested on the ground yet.

They have faced just six rushes by quarterbacks through two games while going against Matt Ryan and Russell Wilson.

Another rushing quarterback option is Marcus Mariota, who faces the Seattle Seahawks on the road. Seattle has faced Wilson and then, effectively, Jimmy Garoppolo, and thus have faced only eight carries so far by opposing quarterbacks.

Jared Goff has the Detroit Lions off to a hot start offensively. Detroit ranks sixth in adjusted offensive efficiency, according to numberFire’s metrics, through two weeks. The Minnesota Vikings’ pass defense ranks outside the top 20 at the moment, and they’ll be playing on a short week after being dominated by Jalen Hurts on "Monday Night Football" in Week 2.

How likely are you to bench Aaron Jones after a two-touchdown game? Not very. We can say that we need to scale back expectations against a tough Tampa Bay Buccaneers defensive front, but let’s contextualize it for this week. Tampa Bay ranks well overall against the rush, but is actually 31st in rushing success rate allowed, meaning some consistent plays can still be had for Jones. Jones also has averaged 123.0 scrimmage yards and can have a floor even without scoring.

Jeff Wilson was a hot waiver wire addition entering last week’s matchup. His role was solid. He played on 50.0% of the San Francisco 49ers’ snaps and had 103 scrimmage yards on 20 total opportunities (carries plus targets). Tyrion Davis-Price played 40.0% of the snaps but will now miss multiple weeks. The Niners will still find ways to get Jordan Mason and possibly Marlon Mack involved, but the arrow is up on Wilson’s opportunity.

The optimism on Javonte Williams has to be scaled back a bit, given the Broncos’ offensive struggles. Denver ranks 13th in overall offensive efficiency still — yet 30th on the ground. Williams’ value has primarily come through the air, as he has 12 targets through two games thus far. Denver is a slight home underdog against the 49ers this week. That could lead to an elevated target workload once again.

Week 2 saw an extended role for James Robinson, who played on 62.7% of the Jacksonville Jaguars’ offensive snaps and handled 23 carries and two targets. He also had five red zone carries. The Los Angeles Chargers have allowed 5.79 yards per carry to opposing running backs and rank 25th in success rate allowed, as well.

The most consistent role among the New Orleans Saints’ pass catchers belongs to Michael Thomas. Week 1 was the Jarvis Landry week, and last week, we saw Chris Olave obtain more than 300 air yards. But Thomas has had eight targets for 57 yards and two touchdowns in the opener and then nine targets for 65 yards and a score in Week 2. He’s had three of five end zone targets, too, helping explain the touchdown total.

Diontae Johnson hasn’t produced a lot, but has a really strong role. Johnson has run a route on 94.7% of the Pittsburgh Steelers’ drop-backs and is averaging 11.0 targets per game. His expected fantasy point output (half-PPR) of 14.7 is 5.9 points above his actual return (8.9). That’s the third-largest discrepancy among any receiver in the NFL so far. The Cleveland Browns rank 30th in adjusted fantasy points per target allowed to opposing receivers through Week 2. The “Thursday Night Football” matchup means we need to decide on Johnson soon, but don’t bail out just yet unless you have someone else close in the simulations.

Speaking of expected workloads, Christian Kirk ranks top 20 in expected fantasy points among all receivers on a per-game basis, and he is the clear No. 1 option on a passing offense that is currently ranked sixth in adjusted passing offense. The Chargers are 19th defensively, so don’t get too cute with Kirk unless you have better choices.

Drake London’s snap rate climbed from 73.2% to 80.4% in Week 2 after an injury-impacted preseason, so it was very promising to see that role increase in his second game. He drew 12 targets for 86 yards and a touchdown. That worked out to a 48.0% target share and a 47.0% air yards share. Of those 12 targets, five were at least 10 yards downfield, and two were in the red zone. He’s a confident Tier 2 play if needed.

Although the results for T.J. Hockenson haven’t been great, the role has been there. He holds a 19.7% target share, fifth best among all tight ends so far this season, and he has one red zone target per game. The Vikings have allowed 11 catches for 149 yards on 14 tight end targets this season.

As mentioned with Christian Kirk, Evan Engram is involved in a top-six adjusted passing offense for the moment. Engram’s role in Week 2 was noteworthy: 8 targets, 7 catches, 46 yards. That came with only a 4.0-yard average depth of target, which isn’t what you want to see. However, he is holding a 17.6% target share in a solid offense right now and ranks seventh among tight ends in route rate (79.7%). That’s a good streaming combination if needed.