Gase, Jets regroup after tough few days getting over loss 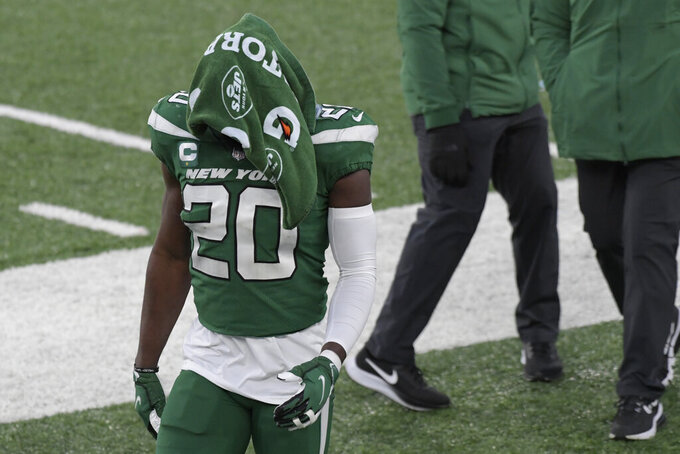 NEW YORK (AP) — The 24-hour rule dragged on a little longer than usual for Adam Gase and the New York Jets.

After their stunning loss to Las Vegas on Sunday, they all needed some additional time to recover mentally and try to shake the fact they had their first victory all but sealed.

Until, they blew it. And, in epic fashion.

“I think the only time I've ever been involved in a loss like this was to end a playoff game, so I could be pissed as long as I wanted to and nobody would care,” Gase acknowledged Wednesday. “It’s tough. I think our players will do a good job and they’ll respond the right way. They have through this whole thing. As coaches, we’ve got to do the same thing.”

The Jets led the Raiders 28-24 with 13 seconds left last Sunday. New York had already — prematurely — celebrated moments earlier, thinking it had finally pulled off that elusive first win. A close call on second down had everyone breathing a sigh of relief as Derek Carr's pass to to Nelson Agholor fell incomplete in the end zone.

On third down, Gregg Williams dialed up an all-out blitz — clearly looking to put an exclamation point on things. But Carr read it the whole way and tossed a 46-yard touchdown to Henry Ruggs III with 5 seconds left. It cost New York a win and Williams his job as he was fired by Gase on Monday morning.

Meanwhile, the rest of team was left trying desperately to regroup.

Gase opted to not have team meetings like he usually would on Monday or Tuesday. They reconvened on the field Wednesday, putting Sunday's debacle behind them.

“I just felt like it was best,” Gase said, “after what happened at the end of the game.”

The Jets are 0-12 and a loss Sunday at Seattle would mark the longest losing streak in franchise history. No, not even the 1-15 squad in 1996 under Rich Kotite did that.

The focus now is squarely on the Seahawks, but that has been a tougher-than-usual process for the Jets. And, for good reason.

“Doing the virtual meetings, that’s probably the one part that really is annoying,” Gase said, referring to the NFL intensive protocols during the coronavirus pandemic. “Our guys help the coaches pull you out of the funk, because these guys come in here with the energy they need to come in here with and they’re ready to go. That helps more than anything.”

Center Connor McGovern called the Jets' practice Wednesday “fantastic,” adding that the team's energy was high and there was good communication on the practice field — a looseness that has been present most of the season.

"The way we’ve practiced definitely doesn’t reflect our record, by any means,” he said.

McGovern said he has been part of teams in his previous four-year stint in Denver that didn’t practice as hard as this Jets team does. That's why he's certain the loss last Sunday won't have a lasting effect on the team heading to Seattle.

“When I come in Wednesday morning, the record has no thought on my mind," McGovern said. "Every week, we want to win, whether we haven't won a game or we've won all the games. So, Sunday night, it definitely hurts a little bit more. Monday, watching it hurts a little bit more, but after that, we were programmed to move on.”

Running back Ty Johnson agreed, saying the players were obviously disappointed and upset after the game. They also recognized the need to flush that bitterness away quickly.

“It's tough and it stings a bit,” Johnson said. “But you've just got to keep on moving forward. This is a moving train for every team. It's not going to stop. You've just got to get over it and have some amnesia.”

Gase regretted not calling a timeout when he heard Williams' play call so they could discuss it. Safety Marcus Maye was openly critical of the call after the game, implying Williams could have put the defense in a better position.

Gase's offense could also share some blame for not being able to seal the game, running three times and gaining just 5 yards — giving the Raiders the chance to win it.

Rookie cornerback Lamar Jackson was also the target of some criticism after he bit on Ruggs' double move and left the speedy receiver all alone to catch the winning TD pass. Gase isn't concerned that Jackson, who was undrafted out of Nebraska and has started the last three games, will have trouble getting over the play.

“I'm confident Lamar will bounce back,” Gase said. "He’s a strong kid. That’s all he’s done all year — he’s a fighter. He didn’t get to this place and end up starting on this team because he wasn’t mentally tough."

NOTES: The Jets designated CB Bless Austin and TE Trevon Wesco to return to practice from injured reserve. Austin has missed the last three games with a neck injury. Wesco has been sidelined the last four games with a sprained ankle.