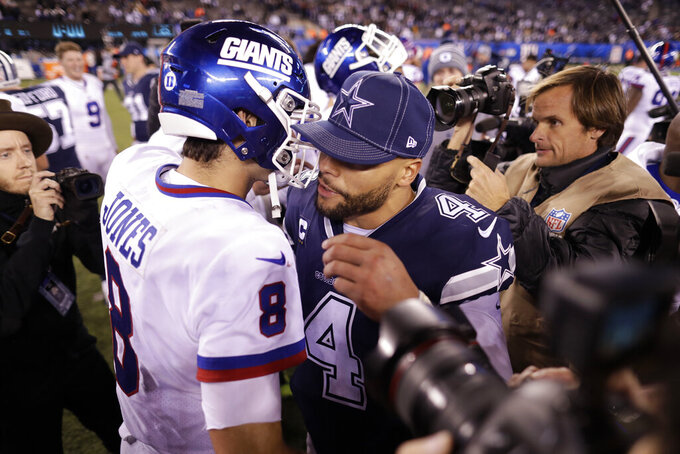 Daniel Jones' second season with the New York Giants is starting the same way as his rookie year. He's learning a new offense.

It's one of the problems playing on a bad team: There are coaching changes. Pat Shurmur is out. Joe Judge is in. Everything is new.

The coaches are new. The offense is new. Learning is even new in a world fighting a pandemic that has made social distancing the new norm.

“Everyone’s dealing with these circumstances. Everyone’s having to adjust.” Jones said Wednesday in a video conference call. “I’m no different now. There’s not going to be, no one is going to be given breaks because you are working remotely. I understand that. I don’t think it’ll be a disadvantage if we approach it like we have; if we approach it like the opportunity is to use the time as well as we possibly can.”

Jones currently is living with his three siblings in his parents' home in Charlotte, North Carolina. He works remotely with the coaches for two hours a day learning the offense being installed by former Dallas coach and current Giants offensive coordinator Jason Garrett.

Judge hired Garrett in January, less than two weeks after being hired as the Giants' fourth coach since the start of the 2017 season.

Jones admitted he started looking at some tapes of Cowboys games to get a feel for the offense that Dallas used for the past decade with Garrett in charge. Once he got the playbook, his goal has been to get it down pat. Jones said there are some similarities with the West Coast system the Giants ran with Shurmur in charge. The way the plays are called — the verbiage — is different, and so are some of the motions and formations.

The Duke product and sixth pick overall in the 2019 draft is throwing as much as he can with former college players and friends from the area.

Before the coronavius hit the United States, Jones brought Giants receivers to North Carolina to throw in the offseason. He also spent some time throwing to them in New Jersey, where the Giants are based.

Jones, who took over from two-time Super Bowl MVP Eli Manning as the Giants' starter early last season, didn’t seem to care that Judge has said starting jobs have to be earned. He wants to earn the starting job.

There are four other quarterbacks on the roster: veterans Colt McCoy, Alex Tanney and former Cowboy Copper Rush, and free agent Case Cookus.

Manning, who retired after the 4-12 season, recently said Jones should have an easier time this season with him out of the picture. Jones noted replacing Manning was awkward at times.

Jones said the Giants, like most people dealing with the virus, talk about it and wonder about safety — and how things are going to turn out.

“I’m not sure anyone has has a great idea about any of it or really knows,” Jones said. “The only thing we can really do is focus on these OTAs, the Zoom meetings, and doing what we can to be prepared whenever we get the opportunity to get back up there.”