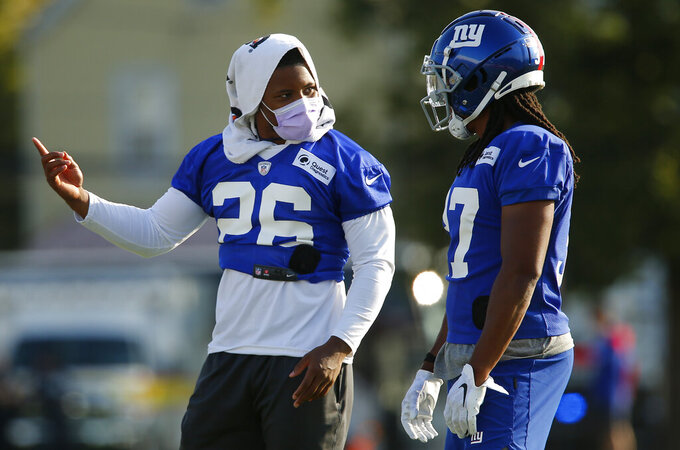 EAST RUTHERFORD, N.J. (AP) — While he isn't in football shape and is unlikely to play in a game anytime soon, star running back Saquon Barkley is back practicing with the New York Giants.

The Giants activated Barkley from the physically unable to perform list Monday and had him participate in some light drills as the team opened its third week of training camp.

The move came roughly 10 1/2 months after Barkley tore the ACL in his right knee in the second game of last season.

Neither Barkley not coach Joe Judge would put a timetable on when he will play in a game. Judge got a laugh saying Barkley would not play in the preseason opener against the Jets on Saturday.

Barkley said what he has repeated for months: When the doctors say he can play in a game, that's when he will play.

The Penn State product smiled telling the media he lobbied to return to practice and laughed when asked if he took any grief from fellow players at the workout.

“That’s just the nature of being out and coming back,” he said. “Got some ‘Whoa, who’s that?’ and people shaking my hand, introducing themselves. That’s all fun-loving games, like I said, it’s fun to be back out there. Those are some of the things you miss.”

Some of the guys on defense even quipped about wanting to get their hands on him. Barkley admitted he threw some trash back.

The NFL Offensive Rookie of the Year in 2018 did not participate in offseason workouts, staying in the Giants' facility to focus on his rehab. He started training camp on the PUP list, but has been on the field watching his teammates.

The Giants had a team blowup at practice last week, and Barkley said he was glad he watched it. He did take part in the team punishment drill after the scuffle, noting he was part of the team and that was a team activity.

Barkley has rushed for 2,344 yards and 17 touchdowns in his first three seasons. He has also caught 149 passes, including six for TDs.

“We’re not going to put him in 11-on-11 or 7-on-7 at this point right now, but as we keep building him up,” Judge said, “we’ll really kind of start to get his body into the volume of practice, the pace of practice of the players out there, more football drills. That’ll be something that benefits him going forward.”

The Giants on Monday also took linebacker Oshane Ximines off the PUP list. He injured his shoulder on Oct. 4 and was placed on injured reserve five days later. He had surgery in November to repair a torn rotator cuff.