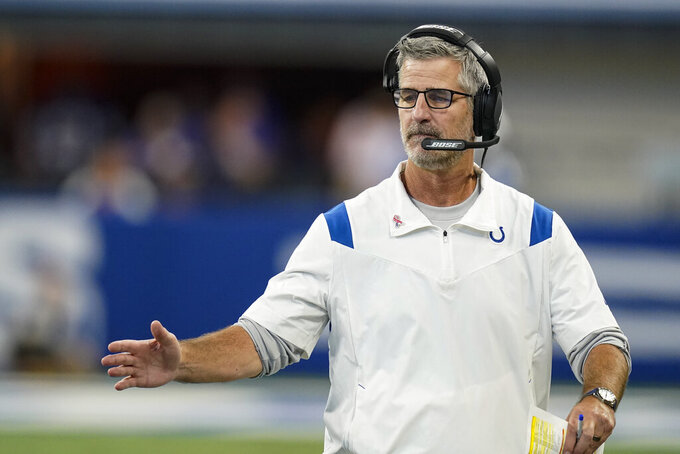 Indianapolis Colts head coach Frank Reich on the sideline in the second half of an NFL football game against the Seattle Seahawks in Indianapolis, Sunday, Sept. 12, 2021. (AP Photo/Charlie Neibergall)

The “Hard Knocks” franchise will have regular-season episodes for the first time when “Hard Knocks In Season: The Indianapolis Colts” debuts on Nov. 17 on HBO.

NFL Films announced the series during halftime of Thursday night’s game between the New York Giants and Washington Football Team.

It will be the Colts’ first appearance on “Hard Knocks,” which debuted in 2001 by following the Baltimore Ravens through training camp as they began defense of their Super Bowl title. The Dallas Cowboys recently wrapped up the 16th edition of the documentary series, becoming the first to make three appearances.

The Colts series will have at least nine episodes on Wednesday nights at 10 p.m. ET.

“We could not be more thrilled to bring Hard Knocks and the remarkable behind-the-scenes access it provides to the NFL regular season,” NFL Films senior executive Ross Ketover said in a statement. “For years, fans have clamored for expanding the Hard Knocks world to include an in-season edition, and thanks to HBO, along with the incredible cooperation from the Colts, we are able to deliver.”

NFL Films did four years of the “All or Nothing” series for Amazon Prime Video, where it followed a team for the entire season, but those episodes were not available until the following summer.

The Colts are trying to make a return trip to the playoffs but dropped their opener to the Seattle Seahawks. Indianapolis traded for quarterback Carson Wentz during the offseason, and linebacker Darius Leonard was the NFL Defensive Rookie of the Year in 2018.

The series also could showcase coach Frank Reich, who is in his fourth season.