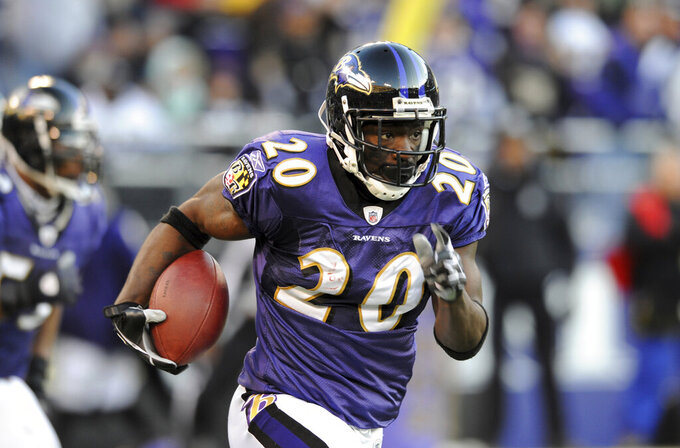 FILE - In this Nov. 23, 2008, file photo, Baltimore Ravens' Ed Reed runs for a touchdown after making an interception against the Philadelphia Eagles during a NFL football game in Baltimore. Reed will be inducted into the Pro Football Hall of Fame in Canton, Ohio, on Aug. 3, 2019. (AP Photo/Gail Burton, File) 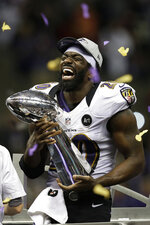 BALTIMORE (AP) — Combining instinct and tireless film study with an unyielding urge to be a difference maker, Ed Reed established himself as one of the greatest safeties in NFL history.

What he did with a football after plucking it from the air set him apart from anyone who ever played the game.

Reed made 64 interceptions over a stellar 12-year career. He owns an NFL-record 1,590 yards in interception returns, including the two longest runbacks: 107 yards against the Eagles in 2008, 106 yards versus the Browns in 2004. Reed considered every pass thrown in his direction to be his property. And when he got hold of it, his lone objective was to take it to house.

"My philosophy was simple. I was trying to score when I got the football in my hand. There was no question about that," Reed said. "When I caught the interception, I knew there weren't too many defenders on (the opposing) offense."

Selected to the Pro Bowl nine times and voted NFL Defensive Player of the Year in 2004, Reed will become the 15th safety inducted into the Pro Football Hall of Fame on Saturday. Whether he's the best of all time at his position is a matter of opinion — unless you're asking Baltimore Ravens coach John Harbaugh, whom Reed helped win a Super Bowl.

Yes, his coach is expected to say something like that. But Reed, who gained entry into the hall on the first ballot, also drew that kind of praise from his opponents.

"He just does things that nobody else at that position does, or I don't know if they've ever done it," Patriots coach Bill Belichick said.

When Steelers quarterback Ben Roethlisberger dropped back to throw, his first priority was to determine where Reed was on the field. Then he'd find out that it didn't matter because Reed was going to meet up with the football anyway.

"You see the safeties out in the middle of the field and have a wide open throw on the right. The next thing you know he's intercepting it," Roethlisberger said. "Where did he come from? That's what made him such a challenge. He made the impossible possible."

Reed played football, baseball and basketball while growing up in Louisiana. He idolized Michael Jordan, and patterned his play in each sport after a player known for excelling in the clutch.

"I always loved how when the game was on the line, he wanted the ball," Reed said. "That was something I could say was in me for a long time. When it was time to do something, I wanted to be that guy. A lot of that came because of watching those Chicago Bulls, man."

A defensive player with the mindset of an offensive star, Reed scored 14 touchdowns during his career (including playoffs) and became the first player to score return touchdowns off a punt, blocked punt, interception and fumble recovery.

"Ed was among the smartest and most remarkable, clutch playmakers in NFL history," Ravens general manager Eric DeCosta said. "You never felt the game was out of reach when No. 20 was on the field."

Reed starred at Miami before taking his talent to the Ravens as the 24th overall pick in the 2002 draft. After learning the fine art of studying game film under a coaching staff that included Chuck Pagano, Mark Stoops and Greg Schiano, Reed honed the craft with Baltimore.

"We had a great staff in college, so after I got to the league, I'd already seen stuff I knew," Reed said. "Then it was enhanced, playing the game with great guys like Ray Lewis and Terrell Suggs, Haloti Ngata, Chris McAlister."

Asked whether his knack for tracking down the football could be attributed most to film study or instinct, Reed replied, "I guess you could go 50-50. I studied a lot of tape, but I can't say a lot of things weren't instinctive."

It was one heck of a combination.

"Ed Reed is the smartest player I've ever coached," former Ravens coach Brian Billick said. "His natural intuition and preparation for the game exceeds anything I've ever been around. He was a truly unique and impactful player in the history of the NFL. No player had better range."

Former Ravens defensive coordinator Rex Ryan added: "Ed studied as much as anybody I've ever been around. His instincts were amazing, and he was able to react because of the film study. That's probably the most underrated thing about Ed — his amazing preparation."

The Ravens, born after the franchise left Cleveland for Baltimore in 1996, now they have three members in the Hall of Fame: Reed, offensive tackle Jonathan Ogden and Lewis.

"Ed is one of the best teammates I've ever had, and he is my brother for life," Lewis said. "His talents, work ethic and leadership are unmatched."

To no surprise his biggest thrill was helping the Ravens win the Super Bowl in New Orleans in February 2013, 34-31 over San Francisco, in Lewis' final game.

"To actually play the Super Bowl in my backyard, that was it right there. It doesn't get any better than that," Reed said. "We walked off the field as champions."

Although Reed played his final season with Houston and the New York Jets, he retired as a member of the Ravens. Through it all, he thrilled the crowds and had a blast doing it.

"The football fans loved the way I played the game. I just tried to be the best for our team to win," Reed said. "It was about having fun and doing it together. It's a kid's game we play. Nothing more than that."