Indianapolis gets in sync with 31-3 victory over Houston 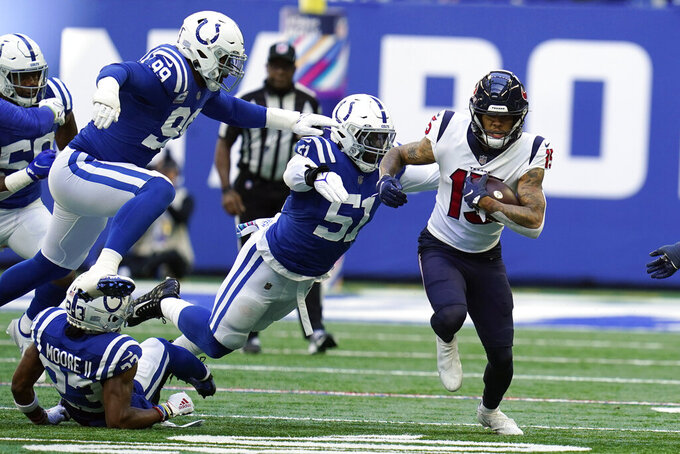 INDIANAPOLIS (AP) — The Indianapolis Colts finally figured out how to deliver a knockout punch Sunday.

They capitalized on turnovers, made big plays at timely moments and, yes, even managed to protect a late lead.

“We had to feel what it feels like to win this way," coach Frank Reich said. “Defensively, getting turnovers. Offensively, getting those chunk plays, and special teams playing solid. It was a good step, but we know we've got to get a lot better."

For the Colts, it was a desperately needed turnaround just six days after a national television audience watched their embarrassing fourth-quarter collapse at Baltimore.

This time, the Colts seized control quickly in the second half — and the defense held up against the struggling Texans, who have lost five straight.

Indy, meanwhile, has won two of its last three and can move within one game of the AFC South lead — if Buffalo beats Tennessee on Monday.

Now, the Colts have some momentum and perhaps a successful blueprint to use in the final 11 games.

“The way we were able to finish this game, the right way, I think was big to help us get going," Wentz said.

What changed from Monday?

Taylor started Indy's next series with an 83-yard run and capped it with a 4-yard TD rush to make it 24-3.

The Texans spent the rest of the game futilely playing catch-up and getting nowhere as Taylor sealed the victory with an 11-yard TD run with 4:47 left.

All Houston could muster was Ka'imi Fairbairn's 31-yard field goal late in the first half.

“I felt like when we came out in the second half, it was very important for us to get a stop and we got the stop," coach David Culley said. “But the next series, we throw an interception and then they get a big play and then it snowballed from there.”

Texans: Safety Terrence Brooks left in the first half with a bruised long, did not return and was scheduled to spend the night in Indianapolis. Culley already has ruled him out of next week's game. Receiver Danny Amendola (thigh), starting center Justin Britt (knee) and left tackle Laremy Tunsil (left thumb) all missed Sunday's game. Receiver Chris Conley left briefly after hurting his neck but returned later.

Colts: Leonard has at least one takeaway in four straight games and also forced a late fumble. ... Hilton caught four passes for 80 yards in his season debut. ... Taylor had 14 carries for 145 yards and became the sixth player in franchise history to get 1,500 yards rushing and 2,000 yards from scrimmage in his first two seasons.

Giovanni Hamilton, the teenage boy who developed a special relationship with Wentz when he was in Philadelphia, attended Sunday's game. They first met at training camp in 2019 and Hamilton later unveiled Wentz's new No. 2 jersey following the March trade that sent Wentz from the Eagles to the Colts.

Hamilton, who has Schwartz-Jampel Syndrome an ailment that causes permanent muscle stiffness and bone abnormalities, watched pregame warmups from the Colts sideline and received a pregame hug and autographed football from Wentz.

“It was good to see Giovanni briefly before the game," Wentz said. “He’s a special kid and it’s kids like him that remind of the bigger impact we can make as role models.”