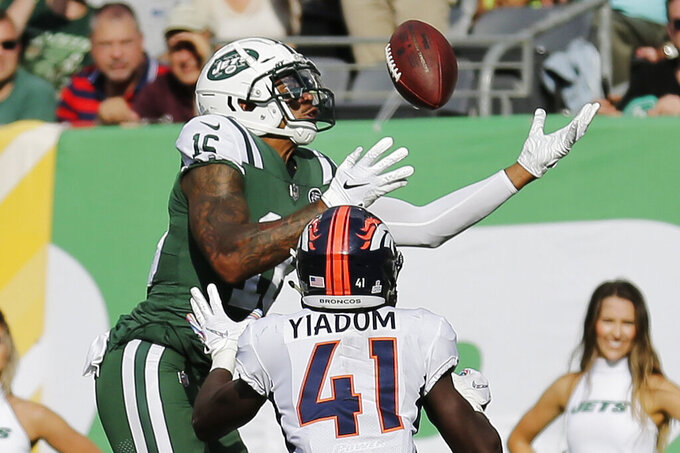 FILE - In this Oct. 7, 2018, file photo, New York Jets' Terrelle Pryor (16) leaps over Denver Broncos' Isaac Yiadom (41) to catch a pass for a touchdown during the second half of an NFL football game in East Rutherford, N.J. The Jacksonville Jaguars have signed journeyman receiver Terrelle Pryor, giving the team more depth and experience at the position. Pryor signed a one-year deal Monday, June 3, 2019, and was expected to practice during organized team activities.(AP Photo/Seth Wenig, File)

Pryor signed a one-year deal Monday and was expected to practice during organized team activities.

Pryor has 115 receptions for 1,563 yards and seven touchdowns in seven NFL seasons with five teams. The former Ohio State quarterback played for Washington, the New York Jets and Buffalo over the last two years. He had 77 receptions for 1,007 yards and four touchdowns with the Browns in 2016.

By Dennis Waszak Jr. 14 minutes ago
By Teresa M. Walker 3 hrs ago
3 hrs ago
By Josh Dubow 3 hrs ago
By Steve Reed 4 hrs ago