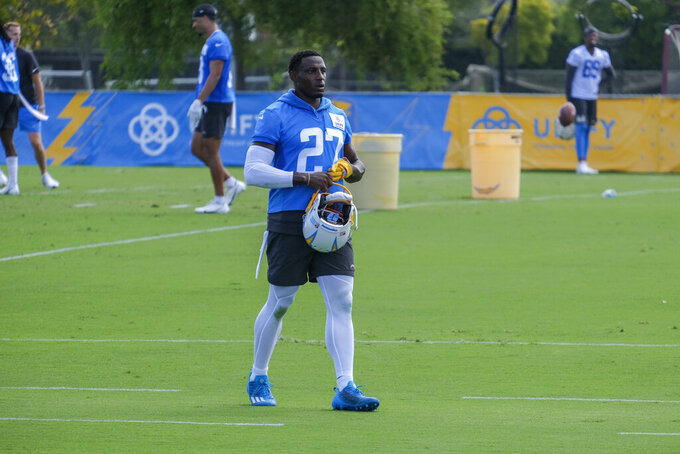 COSTA MESA, Calif. (AP) — Less than two weeks into training camp, J.C. Jackson is proving to be a quick study of the Los Angeles Chargers defense.

The 26-year-old cornerback, one of the top defensive signings in the league during the offseason, has been making life difficult for wide receivers during practices. He came up with a big interception Friday during a two-minute drill near the end of practice.

Backup quarterback Easton Stick threw a pass over the middle intended for Trevon Bradford before Jackson tipped it and then came up with the ball before it hit the ground.

It's the kind of play that has made Jackson one of the top defensive backs in the league and it was deserving of the nickname of Mr. INT that he gave himself during his four years with New England.

“I’m getting the hang of it. Switching to a new team, you always have to adjust," Jackson said. “I’m coming out here each and every day, getting to know my teammates and coaches and having fun competing.”

Jackson’s 25 interceptions over the past four seasons are the most in the league. He led the league with 23 passes defensed and was second with eight picks as he made his first Pro Bowl last season.

The Patriots, however, did not place the franchise tag on Jackson, who came into the league as an undrafted free agent in 2018. He wasn't without a team for long as the Chargers signed him to a five-year, $82.5 million contract. The $16.5 million average per year is tied for ninth-highest in the league among cornerbacks.

Los Angeles was 9-8 last season but missed the playoffs for the third straight year. One reason was the defense, which was ranked 23rd.

The Chargers were aggressive during the offseason in addressing the defense, signing Jackson and acquiring linebacker Khalil Mack from Chicago.

According to Pro Football Focus, Jackson had the top grade in man coverage among cornerbacks who played half the snaps in their team’s games last season.

"He’s been like we anticipated from his playing days in New England. He’s come out here and just been a lock-down performer," defensive coordinator Renaldo Hill said. "Every time he steps on the grass, he’s either close to making a play or he’s making a play.”

Even though Jackson has excelled in picking off passes, he thinks his totals can increase this season now that he is on a team with an effective pass rush duo in Joey Bosa and Mack.

The only thing that hasn't happened during the first eight practices of training camp is Jackson being tested by quarterback Justin Herbert. Jackson laughed when he said Herbert hasn't thrown much to his side.

“I don’t know if he’s afraid or what, but Herb hasn’t been throwing to my side yet,” Jackson said. "But no, Herbert is a great guy. I love practicing against him. I can’t wait to see what he does this year.”

Jackson also hasn't practiced yet with safety Derwin James, who isn't participating in practices while the Chargers and his agent negotiate a contract extension. Jackson, who has known James since high school, said James' recruiting during the Pro Bowl was one of the reasons he ended up in Los Angeles.

“We’re still building, it’s still early in training camp. I love coming out here and competing with my teammates,” he said.

Jackson will be matched up against the opponent's best receiver. The Sept. 11 matchup against Las Vegas and new Raiders receiver Davante Adams will be a strong opening test.

“I don’t feel any pressure. I just feel more excited. I’m excited to be here, excited to be a part of this team,” Jackson said. "You’ll see this year, when the season starts, what I’m going to bring to the table and to this team.”