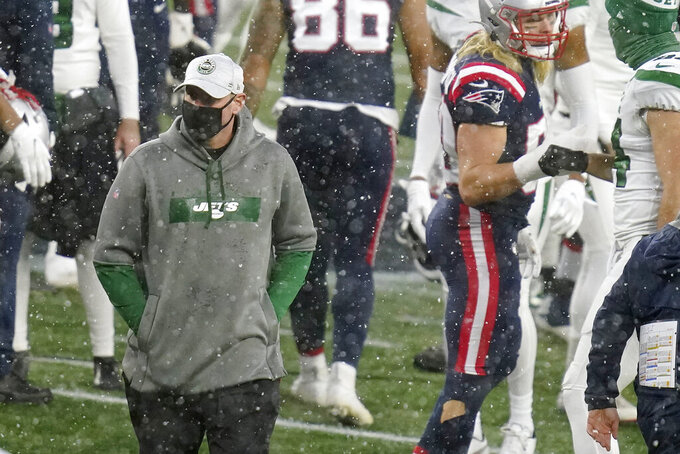 NEW YORK (AP) — Adam Gase came to New York with high hopes he would be the perfect fit to help quarterback Sam Darnold take the next step in his development and boost the Jets' offense.

And lead the team back to the postseason.

None of that materialized. So, the search is on — again — for a frustrated franchise.

Hired by the Jets in January 2019, Gase went 9-23 with New York, including an 0-13 start that was the worst in franchise history — overshadowing even the 1996 squad that went 0-8 on the way to a 1-15 finish, and is generally recognized as the team’s worst.

The move was announced by the team a few hours after New York lost 28-14 at New England on Sunday to end the season 2-14 — the second-worst record in franchise history.

“To our fans, it is obvious we have not been good enough,” Johnson said. "We are committed to building a strong organization, on and off the field, and will continue to provide the necessary resources to field a team that you can be proud of.”

Darnold regressed in his third season before being sidelined twice because of an injured right shoulder, while the offense — ravaged by injuries early and not to mention the impact of the pandemic — was mostly inept. The Jets struggled until late in the season to put a consistently competitive offense on the field. Gase even handed off offensive play-calling duties to coordinator Dowell Loggains for a stretch to try to spark things.

Gase shouldered the blame for not helping Darnold enough to develop, and also acknowledged he felt as though he let down the Jets and Johnson.

“At the end of the day, it’s about winning,” Gase said last month. “We haven’t done that. For (Johnson) not to feel a playoff feel of being competitive in December, it’s disappointing to me that we haven’t been able to do that for him.”

Frustrated fans, many of whom weren’t excited by his hiring in January 2019, flocked to social media and sports radio nearly all season pleading for Gase to be fired.

Despite all that, several players — Darnold included — insisted Gase and his staff were putting the players in position to succeed, but they simply weren’t executing on the field. Gase never saw eye to eye with star running back Le’Veon Bell, who was unceremoniously released on Oct. 13. The coach also fired Gregg Williams after the defensive coordinator’s curiously overaggressive call cost the Jets their first win against Las Vegas on Dec. 6.

The team otherwise managed to stick together, though, and was able to end the season on a relative high note with two wins in the last three games. But those late victories also cost the Jets the No. 1 overall pick in the draft in April — and likely a chance at taking Clemson star quarterback Trevor Lawrence.

They’ll instead pick second, but Gase won’t be around to help general manager Joe Douglas.

The move Sunday night came after Johnson insisted early this season he had “full confidence” in Gase and reiterated he believed the coach is a “brilliant offensive mind.”

But the on-field failures were apparently enough to change Johnson’s stance as he looks to the future. Douglas, hired six months after Gase in June 2019, will now have the chance to help hire the next coach.

The Jets will also be facing some key questions: Is Darnold the quarterback of the future, and will they exercise his fifth-year contract option worth about $25 million fully guaranteed? If they keep Darnold, will the new coach be able to tap into his potential in a way Gase simply could not? Or, will Douglas and the Jets decide to move on?

Gase wasn’t a popular pick among fans after the Jets fired Todd Bowles following the 2018 season. Despite being fired by Miami following three seasons, Gase was highly recommended to New York by Peyton Manning after the two combined on the quarterback’s record-breaking season with Denver in 2013 when the coach was Broncos offensive coordinator.

But Gase had an awkward introductory news conference with the Jets, with the coach’s seemingly uncomfortable gazes and shifting eyes quickly becoming memes and gifs on social media.

While Gase was generally regarded as one of the league’s brightest young offensive coaches, his time in Miami tempered some of that enthusiasm. There were injuries, lack of production and questions about Gase’s relationship with his players — all things that began to emerge in New York.

Still, there was some optimism after the Jets finished 7-9 last year following a 1-7 start that was marked by Darnold missing three games with mononucleosis. But Darnold and the offense struggled mightily.

“We knew there was a lot of work that needed to be done when Adam joined us in 2019,” Johnson said. “Our strong finish last year was encouraging, but unfortunately, we did not sustain that positive momentum or see the progress we all expected this season.”

The 42-year-old Gase is 32-49 overall in his career, including 0-1 in the playoffs with Miami. His .281 winning percentage with New York is second worst in team history — with only Rich Kotite (.125, 4-28) lower — among coaches who were with the team for more than one season.

And a franchise that hasn’t been to the playoffs since the 2010 season, the longest drought in the NFL, is again on the hunt for a coach to restore the Jets to respectability.