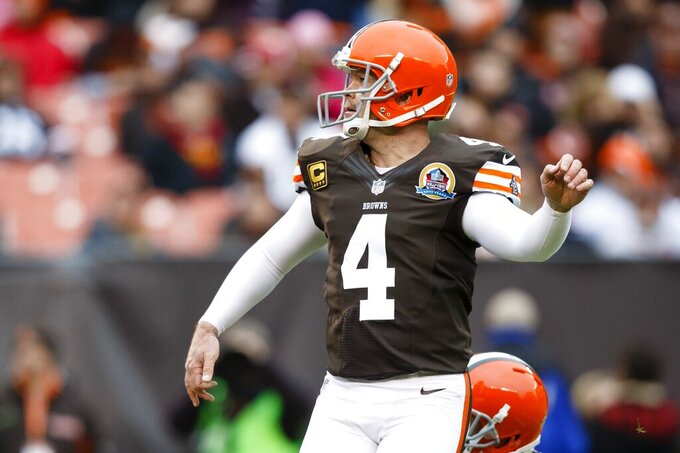 FILE - In this Dec. 9, 2012 file photo Cleveland Browns kicker Phil Dawson (4) kicks a field goal against the Kansas City Chiefs during an NFL football game in Cleveland. Dawson has retired from the NFL after 20 seasons. (AP Photo/Rick Osentoski, file)

BEREA, Ohio (AP) — Kicker Phil Dawson has retired from the NFL at age 44 after 20 seasons.

He spent his first 14 seasons with the Browns and will sign a one-day contract to ceremonially retire with the franchise. Dawson played in 305 games — the seventh most in league history — and ranks 11th with 1,847 points.

He says the "opportunity to come back home and retire with the organization and the city that I love is incredibly meaningful." He adds that it "seems right" to do this with the "fans that have been so good to me and my family."

A Pro Bowl selection in 2012, Dawson began his career with Cleveland's expansion team in 1999. He joined the 49ers as a free agent in 2013 and played with the Cardinals the last two seasons.

Dawson scored 1,271 points with the Browns, trailing only Hall of Famer Lou Groza in team history. His 441 field goals are eighth on the NFL career list.