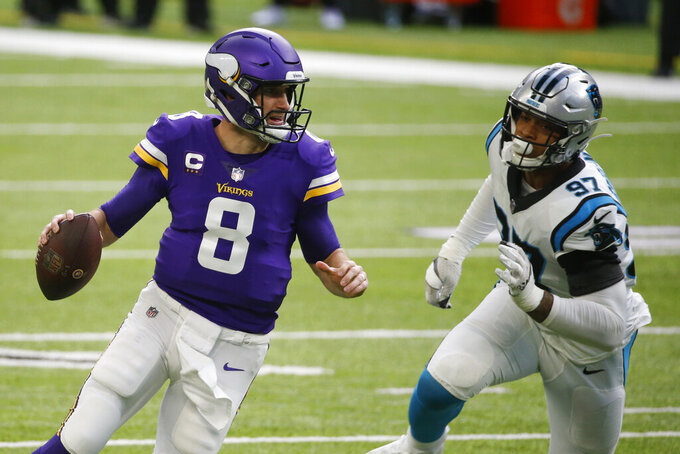 Wake Forest coach Steve Forbes said the Demon Deacons’ men’s basketball game against VMI on Dec. 21 is “not going to happen” as the program deals with coronavirus issues.

During his weekly radio show, Forbes said the program had a “significant increase” in positive COVID-19 tests over the past week. The school announced Nov. 30 that it was pausing team activities and that it wouldn’t play Troy last Wednesday.

By the end of the week, the Atlantic Coast Conference had announced the postponement of Wake Forest’s home game next week against No. 18 Virginia while Sunday’s scheduled game against Presbyterian was canceled.

With the VMI game off, Wake Forest (2-0) would be scheduled to return against Syracuse on Dec. 30 to open ACC play. It’s unclear whether the team will be able to play another game before then.

Mississippi’s football game at No. 5 Texas A&M scheduled for Saturday has been postponed because of positive COVID-19 tests and contact tracing within the Rebels program.

Ole Miss paused all team activities last week because of positive COVID-19 cases but had hoped to resume practice on Wednesday and play the Aggies on Saturday.

“We’ve stressed throughout 2020, and it’s a great lesson about life, control what you can control,” Texas A&M coach Jimbo Fisher said in a statement. “It’s unfortunate we are unable to play Ole Miss this week. I feel for our seniors who were looking forward to being recognized and playing at Kyle Field. We will go back to work controlling what we can, and that is preparing to play Tennessee next week.”

Portland Trail Blazers coach Terry Stotts says a player was among the three people connected to the team who tested positive for the coronavirus.

The player was not identified. The Blazers are set to tip off a four-game preseason schedule Friday with a game against the Sacramento Kings at the Moda Center.

The team plans to hold its first practice of the preseason on Tuesday. In addition to the player who tested positive, Zach Collins won’t be available because of an ankle injury, and center Jusuf Nurkick only recently arrived in Portland and still must clear the testing protocol.

The Blazers announced the positive tests Sunday, but did not specify whether they were among players or staff members. The results were from the past four days.

While coach Steve Kerr didn’t actually say the two players had positive results, he made it clear they were the only two to miss practice on Day 1 of training camp Monday.

General manager Bob Myers had previously acknowledged two players had tested positive for COVID-19 without providing names and said they would be out at least 10 days before being tested again.

Kerr said Monday on a Zoom with reporters that he couldn’t elaborate on what Green and Wiseman were able to do at the moment.

“I’m not allowed to comment. You can make your own deductions. I know it’s really tricky,” Kerr said, adding that he assumed the reporters on the call had “figured out what's happening here.”

Of Green, Kerr said: “When he’s ready to go he’ll be out there. I’m not worried about Draymond.”

Eight Carolina Panthers players have been placed on the COVID-19 list, forcing the team to close its practice facility in Charlotte, North Carolina, until Wednesday.

Defensive linemen Yetur Gross-Matos and Bruce Hector, a member of the practice squad, were placed on the COVID-19 list last week.

The Panthers are scheduled to host the Denver Broncos on Sunday.

Vanderbilt men’s basketball has canceled a fourth straight game with the program paused due to COVID-19 issues.

The Commodores haven’t played since beating Valparaiso in their opener on Nov. 27.

They announced Monday that Friday’s game against North Carolina Central has been canceled. Their next game now is set for Sunday against Mississippi Valley State.

North Carolina State says its men's basketball game at Michigan on Wednesday has been postponed.

The announcement came Monday before the teams were set to meet in the ACC/Big Ten Challenge. N.C. State says the schools will work toward potentially rescheduling the game.

The Wolfpack had to cancel Saturday’s “Bubbleville” matchup with Connecticut in the Huskies' home state after a member of the N.C State traveling party had a positive COVID-19 test. That came a day after the team had beaten Massachusetts-Lowell there, though the school said all program members had tested negative before traveling to Connecticut as well as immediately after their arrival.

N.C. State said Monday it is continuing to evaluate the short-term schedule for the program, which is scheduled to host Florida Atlantic on Saturday.

In a statement, Michigan said it has no current coronavirus issues.

“It would have been fun,” Wolverines coach Juwan Howard said. “However, we must do what is right, and this is the right thing for everyone.”

The No. 2 Baylor men’s basketball team is looking for a replacement opponent for its scheduled home opener.

The Bears were supposed to play Nicholls State on Tuesday night, but the Colonels had positive COVID-19 tests in their program.

Baylor said it was trying to find another opponent to play before its Big 12 opener at home Sunday against No. 13 Texas.

The cancellation of the home opener comes two days after Baylor’s showdown with No. 1 Gonzaga was scrapped only 90 minutes before tip Saturday because a player and another person with the Bulldogs’ traveling team tested positive.

The Wolverines paused in-person activities last week after a COVID-19 outbreak within the program.

The Buckeyes, who have Big Ten and national title hopes, played through what coach Ryan Day called a “mini outbreak” on Saturday in a 52-12 win at Michigan State after he was relegated to watching the game from home.

The Florida Panthers say their home arena is the NHL’s first to be recognized for the steps being taken toward bringing fans back to games safely when the league resumes play amid the coronavirus pandemic.

The International WELL Building Institute said Monday it gave the Panthers’ arena its Health-Safety Rating in response to “stringent guidelines and protocols for combatting COVID-19 and preparedness to safely accommodate fans upon reopening.”

The NHL has not said when its upcoming season will begin. Teams have not played in front of fans since the league shut down in response to the pandemic in March; the season was finished over the summer in a pair of bubbles.

The certification takes into account how the arena has upgraded its air and water quality management systems with a focus on filtration and ventilation; cleaning and sanitation procedures; emergency preparedness; employee health and safety plans; and other programs to promote health in areas like food-service inspections.

No. 13 Wisconsin’s men’s basketball game with No. 25 Louisville scheduled for Wednesday has been postponed. Wisconsin officials say the schools are trying to arrange a date to make the game up later in the season.

The announcement comes four days after Louisville announced it was pausing team-related activities indefinitely due to a positive COVID-19 test and contact tracing measures within its program. That already caused Louisville to cancel a scheduled Dec. 4 home game with UNC Greensboro.

Wisconsin will still play on Wednesday, but the Badgers will have a different opponent. Rather than facing Louisville that night, Wisconsin will host Rhode Island in a game starting at 3:30 p.m. Central.

The LA Bowl won't play its inaugural game until next season. The matchup between the Mountain West champion and the fifth selection from the Pac-12 was postponed Monday.

It had been scheduled to take place at SoFi Stadium.

The Carolina Panthers have shut down their facility for the next two days after multiple players either tested positive for COVID-19 or were exposed to someone with the virus during the team’s bye week.

The names of the players being placed on the reserve/COVID-19 list will be available later Monday.

Last week, the Panthers placed rookie defensive end Yetur Gross-Matos and practice squad defensive tackle Bruce Hector on the list, which is for players who have either tested positive themselves or have had close contact with someone who has.

The Panthers will conduct virtual meetings and do virus testing and contact tracing while their facility is temporarily closed.

Carolina plays host to the Denver Broncos on Sunday.