McCaffrey back to practice, Darnold in concussion protocol 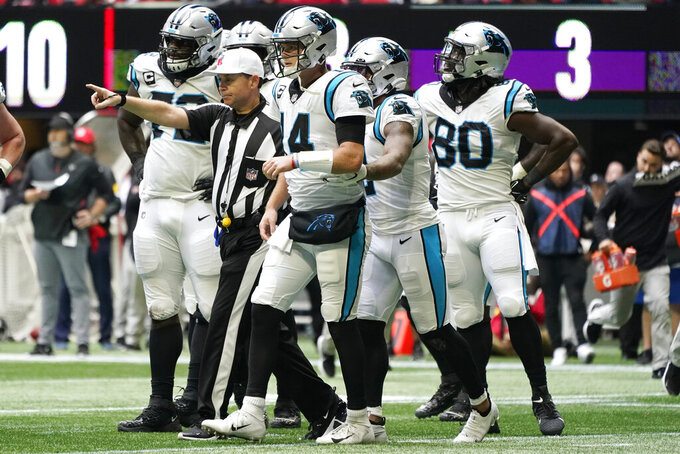 Carolina Panthers quarterback Sam Darnold (14) leaves the game after a hit during the second half of an NFL football game against the Atlanta Falcons, Sunday, Oct. 31, 2021, in Atlanta. (AP Photo/Mark Humphrey)

CHARLOTTE, N.C. (AP) — Carolina Panthers running back Christian McCaffrey was excited to be back at practice, skipping ahead of his teammates during warmup runs and slapping low-fives with them.

Sam Darnold was on the field too for a short period of time, although the team's starting quarterback was “extremely limited” and remains in the NFL's concussion protocol, according to coach Matt Rhule.

The status of both players for Sunday's game against the New England Patriots (4-4) remains unclear for now.

McCaffrey was designated for return from injured reserve on Wednesday and the team has 21 days to decide whether to activate him to the 53-man roster. His return to practice could be a big boost for the Panthers (4-4) who are looking to build off last week’s 19-13 win over the Atlanta Falcons, which snapped a four-game losing steak.

The Panthers are taking a cautious approach this week, making sure the 2019 All-Pro doesn't rush back too soon and reinjure himself.

Rhule said McCaffrey's first practice in three weeks was “pretty limited, not a ton of plays.”

“We are just trying to begin the process of working him back," Rhule said. "He hasn't practiced in several weeks and this was his first day back. So we will see how he looks (Thursday), and in terms of his availability this weekend we will see how he responds. But he had no setbacks.”

Rhule pointed out that linebacker Shaq Thompson and cornerback Stephon Gilmore both needed more than a week after returning to practice before they were ready to play. McCaffrey has mostly rested up and healed the past three weeks, Rhule said.

“I think the biggest thing is how he feels after today,” Rhule said.

Chuba Hubbard has been handling the majority of reps at running back with McCaffrey out and Ameer Abdullah had an increased role in Carolina's 19-13 win over the Atlanta Falcons last Sunday. Hubbard has run for 391 yards and two touchdowns this season while averaging 3.6 yards per carry.

McCaffrey, who has missed 18 of Carolina's past 24 games since signing a contract extension, got off to a strong start this season before going down in the first half of Carolina’s Week 3 win against the Houston Texans. He had 364 yards from scrimmage and one touchdown through the first 10 quarters of the season. He hasn’t played since.

Darnold's status for this week seems much more in doubt.

He was on the field for pre-practice work Wednesday, but was not there during the 20 minutes of practice that were open to reporters. Rhule said Darnold ran through a few things before practice, but didn't do much at all.

Darnold would need to pass the NFL's concussion protocol before being cleared to play.

While Rhule is still “hopeful” that Darnold would play Sunday, he offered no guarantees and backup quarterback P.J. Walker made it sound as if he would start.

The former XFL quarterback who played under Rhule at Temple started one game last season, helping the Panthers beat the Detroit Lions. But Walker had two red zone interceptions in that game, and Rhule wants him to make better decisions if he's forced into a starting role this week.

Walker said having one NFL start under his belt helps.