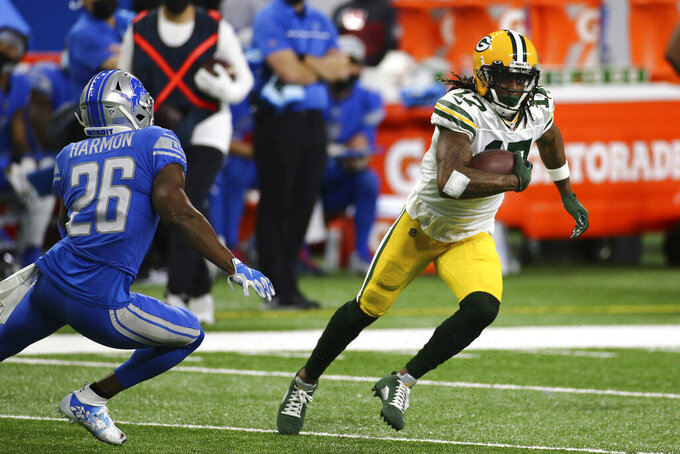 The Green Bay Packers have clinched their second straight NFC North title and put themselves in position to earn the conference’s top playoff seed because of a championship-caliber offense.

Their chances of reaching the Super Bowl for the first time in a decade could rest on whether they improve in the other two phases of the game.

Green Bay (10-3) controls its chances in the race for the NFC’s No. 1 seed after winning 31-24 at Detroit on Sunday while the New Orleans Saints (10-3) lost 24-21 at Philadelphia. Although the Packers and Saints own the same record, Green Bay has the tiebreaker after winning 37-27 at New Orleans on Sept. 27.

Under the new 14-team playoff system, only one team in each conference earns a first-round playoff bye.

“I think it’s extremely critical,” Packers coach Matt LaFleur said Monday. “Once you get in the playoffs and you accomplish your first goal, it’s on to the next goal. We know that, again, we’re not going to change our approach. We’re going to take it one game at a time.”

The Packers host Carolina (4-9) on Saturday night and welcome Tennessee (9-4) to Lambeau Field on Dec. 27 before ending the regular season Jan. 3 at Chicago (6-7). New Orleans hosts Kansas City (12-1) and Minnesota (6-7) and visits Carolina in its final three games.

Green Bay’s in this position because quarterback Aaron Rodgers and wide receiver Davante Adams are performing as well as any players at their respective positions.

LaFleur said Rodgers should be the MVP front-runner after the 37-year-old quarterback threw for 290 yards and three touchdowns without an interception Sunday. Adams set a franchise record by catching a touchdown pass in his eighth consecutive game.

While this team is getting stellar seasons from its stars, Rodgers says the contributions of role players have set these Packers apart. Rodgers cited tight end Marcedes Lewis and wide receiver Allen Lazard as examples.

“It’s camaraderie and chemistry and ability to deal with adversity and not starting to point fingers, that resolve, that grit,” Rodgers said after Sunday's game. “I feel like this team has a lot of those characteristics. I think we’re built a little bit differently.”

That helps explain why the Packers have scored an NFL-leading 31.5 points per game. Green Bay’s needed that kind of production on offense because of its issues elsewhere.

Green Bay has given up 24.8 points per game to rank 17th out of 32 NFL teams. Problems on defense and breakdowns on special teams have caused the Packers to struggle to protect double-digit, second-half leads over Detroit and Philadelphia the last two weeks.

“We’ve got to make sure we bring our best each and every week, because if you don’t, it’s just too competitive in this league,” LaFleur said after the Lions game. “You can’t take anything for granted. You have to earn everything that you get.”

Special teams remain a major issue. One week after allowing Philadelphia’s Jalen Reagor to score on a 73-yard punt return, the Packers allowed Detroit’s Jamal Agnew to return a kickoff 71 yards before kicker Mason Crosby finally knocked him out of bounds. The Packers committed a season-high 12 penalties Sunday.

Rodgers gave his MVP case a huge push by performing so well on a day when Kansas City’s Patrick Mahomes threw three interceptions, albeit in a victory. Rodgers has thrown an NFL-leading 39 touchdown passes with only four interceptions. … Adams has 14 touchdown catches to match Kansas City’s Tyreek Hill for the NFL lead despite missing two games with a hamstring injury. ... Crosby made a 57-yard field goal that was just one yard off his career high. ... After going without a catch in two straight games, Marquez Valdes-Scantling had six receptions for 85 yards and a touchdown Sunday. ... Robert Tonyan has a touchdown catch in four straight games.

Linebacker Christian Kirksey was penalized for defensive holding on one of Detroit’s touchdown drives and appeared to struggle in pass coverage.

Defensive back Chandon Sullivan hurt his hip Sunday. LaFleur said after the game that outside linebacker Rashan Gary “was battling through a little something” during the game, but didn’t offer any specifics.

The Packers won’t have much time to get ready for a Saturday night home game with Carolina.