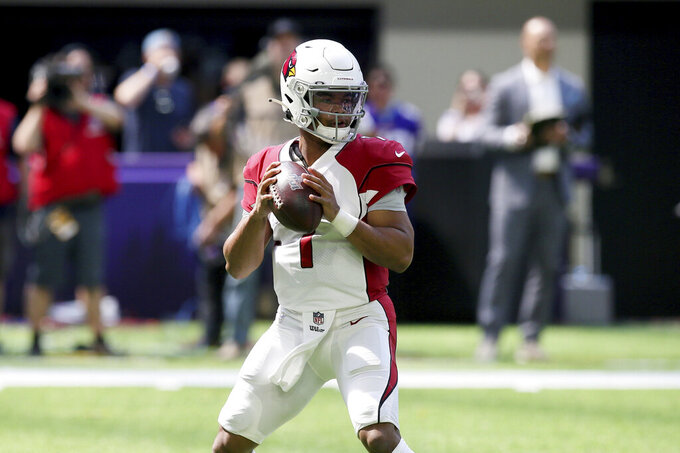 FILE - In a Saturday, Aug. 24, 2019 file photo, Arizona Cardinals quarterback Kyler Murray throws a pass during the first half of an NFL preseason football game against the Minnesota Vikings, in Minneapolis. (AP Photo/Jim Mone, File)

Lamar Jackson's midseason promotion to starter for the Baltimore Ravens last year helped quarterbacks set an NFL record for carries and yards rushing in a season at their position.

Even though he started only the final seven games, Jackson broke a 46-year-old league mark with 147 carries in the regular season, and the NFL had an unprecedented third straight year with at least 10 QBs registering at least 50 rushes.

With the speedy Kyler Murray set to start for the Arizona Cardinals — following Cleveland's Baker Mayfield as the second straight mobile Oklahoma quarterback drafted No. 1 overall — the question is whether the NFL is going through another phase or might be on an irreversible path to run-savvy QBs under center.

"Is it going to be the norm?" asked NFL Network analyst Steve Mariucci, the former coach in San Francisco and Detroit. "I don't know about that. We're going to get what comes up out of the college ranks. Next year, is there an option quarterback coming up, or are there more dropback guys coming up? We take what we can get."

Even with kneel-downs at the end of games factored in, there is little question quarterbacks are running more than ever.

The 1,871 carries for 8,086 yards by quarterbacks in 2018 were records, but the most significant number was 14.1% of the league's total number of running plays being by the QB.

That percentage had never been higher than 12.3% since the merger in 1970, and last year's number was more than twice that of the percentage from the year with the most overall runs in NFL history. Of the 16,075 carries in 1978, 6.3% were by quarterbacks.

While Dak Prescott of Dallas hasn't been as prolific as others in carries and yards, he already is within two TDs rushing of Hall of Famer Roger Staubach's club career record of 20. Prescott is the NFL's first QB with at least 20 touchdowns passing and five rushing in each of his first three seasons (six rushing each year).

"The more I talk to coaches, the more progressive coaches that I speak to, they want point guards," ESPN draft analyst Todd McShay said. "They want guys who it's like, make the read, if the second read's not there, let's go.

"And everything's so spread out, that there's more opportunity and more lanes to just, all right, if I can't hit that throw, if I can't hit my second, it's not worth me sitting in the pocket and looking for the third and fourth when I can just pick up 4 to 6 yards running right up that lane."

This is one of the reasons for so much intrigue over Murray, the dynamic 5-foot-10 Heisman Trophy winner. While the player who chose football after being a top 10 pick in the baseball draft by the Oakland Athletics has been praised for his arm strength and accuracy, everyone wants to see him run.

Another factor is that Murray's coach is Kliff Kingsbury , fired at Texas Tech before getting hired by the Cardinals. Kingsbury developed NFL MVP Patrick Mahomes of Kansas City while with the Red Raiders and was Johnny Manziel's offensive coordinator and QB coach at Texas A&M.

Analysts seem to like the phrase "college experiment," which relates to whether the spread offenses in the college game will continue to produce quarterbacks who can win games with their feet in the pros.

Mike Tannenbaum, an ESPN analyst and former personnel man with Miami and the New York Jets, offered the reminder that the most successful NFL and college programs in recent years — New England and Alabama — still use a fullback.

"While we see the evolution of Lamar Jackson and Kyler Murray and guys like Baker Mayfield, who operate and thrive in a spread system, I think our sport still has room for the quote-unquote more traditional, power, two-back offense," Tannenbaum said.

Prolific running QBs aren't new to the NFL. Randall Cunningham led the league in yards rushing for quarterbacks for five straight seasons three decades ago, rushing for at least 500 yards each time. Michael Vick set the single-season QB mark in 2006 with 1,039 yards.

Carolina's Cam Newton, who is dealing with a foot sprain suffered in a preseason game, has more than 100 carries in seven of his eight seasons with 90 in the other. He has led QBs in yards rushing four times, never with fewer than 585 yards.

But Newton turned 30 in May — a magic number in the mind of Mariucci, who coached Steve Young with the 49ers. Considered among the most mobile QBs in the 1990s, Young had a career best of 537 yards, modest compared with Cunningham, Vick and Newton.

Young didn't become a full-time starter until he was 30, and Mariucci wasn't big on the risk of injury. History is on his side, too. Cunningham and Vick weren't full-time starters much past 30, and the rushing numbers for most mobile QBs dropped significantly beyond that age.

"The running quarterback is going to have better numbers as a younger quarterback, when they have fresh legs and they're young and they're 22 and they're 25," Mariucci said. "Run around, have fun. When they get in their 30s, that running stuff is overrated."

Still, it will be awhile before Jackson, Murray and Mayfield get there.