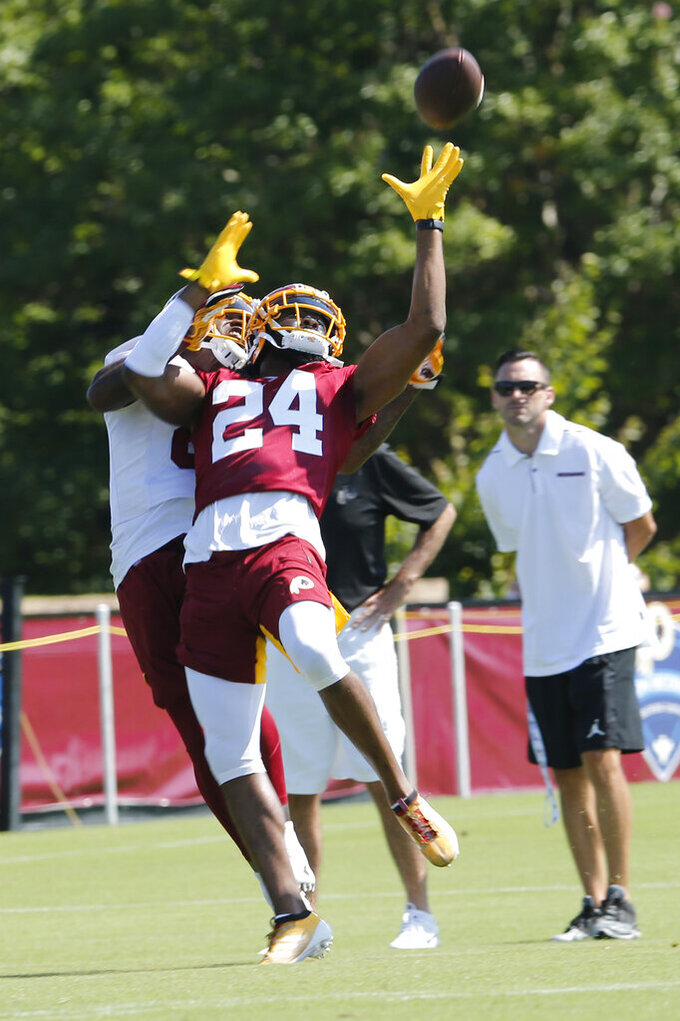 RICHMOND, Va. (AP) — Josh Norman flipped the switch from a whirlwind offseason to a "see ball, get ball" approach at training camp.

Unwilling to sacrifice outside interests and eager to make a difference off the football field, the Washington Redskins cornerback might be the most interesting man in the NFL. A year after competing on ABC's "Dancing with the Stars," Norman flew with the Blue Angels, took in a Champions League soccer match, ran with the bulls in Pamplona, donated to an immigrant detention center and financed the construction of a youth facility in his hometown.

"It showed I can tackle anything, literally. But at the same time, I might run out of the way of it," Norman said. "It's all fun and games. ... I feel so loose and relaxed just because I've been through a roller coaster offseason."

Video of Norman leaping over a bull stood out from the typical player Instagram posts featuring offseason workouts. It has been the subject of plenty of barbs, like coach Jay Gruden joking that he knew the bull wouldn't hit Norman because he avoids contact.

"I spoke to his dad and I said I wasn't really a great fan of the dancing the year before, but now I like the dancing," Redskins President Bruce Allen said. "Dancing with a woman versus dancing with a bull, I thought was a better idea for a summer project. But that's Josh. I can't wait to see what he comes up with next year."

For all the fun Norman has, Gruden doesn't want people to forget that the 31-year-old spends plenty of time and money trying to make the world a better place.

"Josh is a man of the world," Gruden said. "Josh has experienced more things in his life at his young age than most people have in their whole life. Obviously, we wouldn't recommend that for our players and we want them to keep out of harm's way. Josh is a unique man, and he has done a lot of great work other than jumping over bulls. He has done a lot of charitable work that people don't know about and great things for the community. I applaud Josh and the way he lives his life."

Norman is far from a one-trick pony during his time away. His Instagram page is a tapestry of everything from a video of climbing into the cockpit of a Blue Angels plane to photos of him donating $18,000 to an immigrant detention center and looking over plans for the Josh Norman Teen Center in Greenwood, South Carolina, which he considers his greatest feat to date.

"I'm always about helping, man, in any way I can," Norman said Tuesday when asked about his donation to the detention center. "That's why we're here. I feel life if you have it and you see there's a need, then you do (it). What am I going to use it for? I feel like what I've been blessed with, I try to give back in multitudes because I feel like people need it the most. What do I need it for? I can always make more."

Thrill-seeking and making an impact in different communities — getting as far away from football as possible — is Norman's preferred way of preparing for the season. He doesn't feel the need to train all offseason to be ready to go when he gets back to work.

Trust Norman because it's working. He had three interceptions and three forced fumbles in a strong 2018 season and has flashed similar ball-hawking moves early in training camp. With safety D.J. Swearinger gone and replaced by Landon Collins, Norman could get the opportunity to be more vocal on the field and inside meeting rooms.

Picking up where he left off last season, Norman looks free and loose early in camp going into his fourth season with Washington.