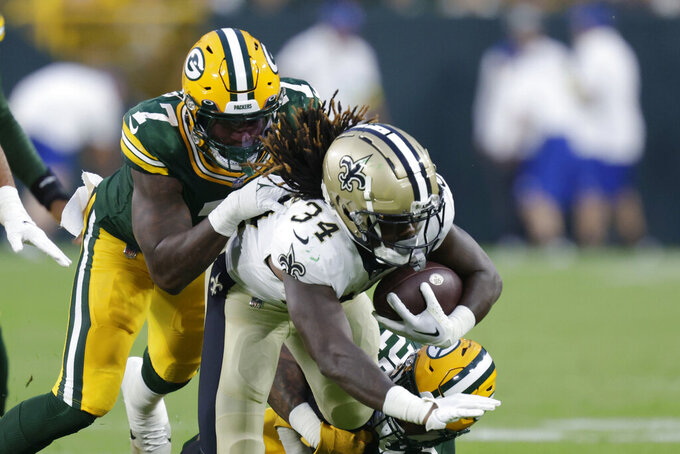 The transition for the Green Bay Packers has been ongoing for a few years, starting with their first-round draft picks in the spring and extending to the field in the fall.

Despite the transcendent presence of four-time NFL MVP Aaron Rodgers at quarterback, the Packers have quietly evolved into a defense-driven team.

“You’ve got do the work and see it,” outside linebacker Rashan Gary said, "but you see the type of guys we've got and the type of ball we’re playing, and you also see the standard we’re holding each other to.”

The Packers defense has not finished in the top quarter of the league in either fewest points or yards allowed since the 2010 championship season, when they ranked second and fifth in those categories during Rodgers' third year as the starter.

They were close in each of the past three seasons, landing ninth in yards in both 2021 and 2020 and ninth in points in 2019, and they've frankly amassed enough talent now that failing to do so this year would be an underachievement.

The requested offseason departure of wide receiver Davante Adams, via trade to Las Vegas, could well serve as the seminal moment in the shift. Not only did the deal remove a five-time Pro Bowl pick and elite pass-catcher from the offense, it netted the Packers the 22nd overall pick in the draft that became Georgia linebacker Quay Walker.

So when the Packers start the season on Sept. 11 at division rival Minnesota, most likely their primary competition in an NFC North they have won three straight times, they are expected to field a starting base defense with seven homegrown players.

“This defense has obviously a really good opportunity to be a top defense in the league,” said Rodgers, who will turn 39 on Dec. 2. “I don't want to crown anybody before we get to the season, but the expectations are definitely high.”

The Packers, who went 39-10 over the past three years but stretched their absence from the Super Bowl to 11 straight seasons, have found themselves in a transitional phase on offense.

The strength of the line will hinge largely on the health of David Bakhtiari and Elgton Jenkins in their recovery from torn ACLs. A.J. Dillon has been taking some of the workload from Aaron Jones at running back. Rookies Christian Watson and Romeo Doubs offer plenty of promise as pass-catchers, though the amount of time they'll overlap with Rodgers is not guaranteed.

Rodgers has never been shy about challenging his young wide receivers, and he's spoken plenty over the past month about the need for them to establish more consistency at a position that's essentially wide open following the trade of Adams.

“You keep dropping the ball,” Rodgers said recently, “you're not going to be out there."

The Vikings started over off the field with a new general manager (Kwesi Adofo-Mensah) and a new head coach (Kevin O'Connell) after going 15-18 over the past two seasons and missing the playoffs both times. They did no such thing with their offense, though with almost their entire starting lineup staying in tact on that side of the ball.

For all the problems the Packers could pose for Kirk Cousins in the opener, the 11th-year veteran will again have a tantalizing core of wide receivers to throw to with Justin Jefferson, Adam Thielen and K.J. Osborn. Running back Dalvin Cook has returned to lead a deep backfield, and tight end Irv Smith Jr. has recovered from the knee injury that kept him out in 2021.

The Detroit Lions have been emitting much better vibes than most three-win teams would, feeding off the energy from second-year head coach Dan Campbell. With a healthy offensive line, the addition of wide receiver D.J. Chark, the emergence of wide receiver Amon Ra St. Brown and the ascendance of running back D'Andre Swift and tight end T.J. Hockenson, the Lions have the potential to put up some points.

For all the flaws that may still linger on defense, they now have the No. 2 overall pick in Aidan Hutchinson on the line and the 2020 No. 3 overall pick in cornerback Jeff Okudah in the secondary.

“We’re a lot farther ahead than we were last year,” Campbell said. "We’re much more competitive. The talent has been upgraded.”

The Chicago Bears also cleaned house in the front office and on the coaching staff by bringing in general manager Ryan Poles and head coach Matt Eberflus. Unlike the Vikings, though, they've taken a longer-term approach toward the roster headlined by second-year quarterback Justin Fields.

Outside linebacker Khalil Mack, defensive lineman Akiem Hicks and wide receiver Allen Robinson are gone, and inside linebacker Roquan Smith would like to be. He requested a trade after not getting the contract extension he sought and only recently began to participate in practice.