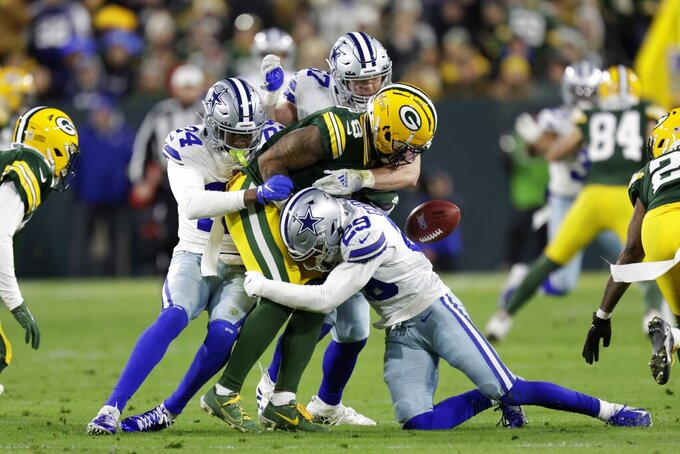 GREEN BAY, Wis. (AP) — The Green Bay Packers have released wide receiver/punt returner Amari Rodgers one year after they traded up in the third round to draft the former Clemson star.

Green Bay sent the No. 92 and No. 135 picks in the 2021 draft to the Tennessee Titans for the right to select Rodgers at No. 85. Gutekunst said afterward the Packers actually had considered taking Rodgers with their second-round pick that year — they chose Ohio State center Josh Myers instead — before moving up to take him in the third.

But Rodgers never carved out a niche as a receiver and struggled to protect the football as a punt returner.

Rodgers fumbled a punt return Sunday to set up a Dallas touchdown in the Packers’ 31-28 overtime victory over the Cowboys. Keisean Nixon handled the punt return duties for the rest of the game.

Rodgers had five fumbles this season and lost two of them. He had 20 punt returns for 139 yards and four catches for 50 yards.

He had just eight catches for 45 yards in his rookie season.

“He’s a guy that I’ve got a lot of respect for and care for deeply,” Packers coach Matt LaFleur said. “I’m confident he’s going to get another shot. Sometimes that’s the best thing for guys in this league, is you go through a little adversity, you get a fresh start somewhere else. I wish him nothing but the best.”

The Packers intended Rodgers to work as a slot receiver, but acquired Randall Cobb from Houston at the start of training camp in 2021 to fill that role. Rodgers struggled to establish himself even as Cobb missed Green Bay’s past four games this season with a high ankle sprain.

Rodgers has considered Cobb a mentor since childhood. Rodgers grew up in Knoxville, Tennessee, and is the son of Tee Martin, the quarterback of Tennessee’s 1998 national championship team and the current Baltimore Ravens receivers coach. Cobb is from Alcoa, Tennessee, about 12 miles from Knoxville.

Cobb said he spoke to Rodgers on Monday night and offered encouragement.

“I hope whatever opportunity comes following or wherever life takes him, that he continues to press and be the best version of himself,” Cobb said. “That was my message that I echoed to him last night is, ‘I know who you are as a man. I know who you are as a person. I know what kind of player you can be. So continue to push yourself and build your confidence. Do whatever you've got to do to build your confidence and get back to being the player that I know that you are. I hope you can find that.’ ”

Hill had one carry for 7 yards this season after returning earlier this month from a torn anterior cruciate ligament that had ended his rookie year. Hill had 10 carries for 24 yards, one catch for 5 yards and 10 kickoff returns for 199 yards while playing eight games last season.

LaFleur indicated the decision to release Hill was based more on off-field factors than anything else. LaFleur said being a member of the Packers is a “privilege, and there’s standards and expectations that are placed on every member of this team that we expect guys to live up to.”

“Regardless of your role — no matter how big or how small — we expect guys to come to work and just be supportive and own that role to the best of their ability," LaFleur said. "When you don’t do that, this is what happens.”