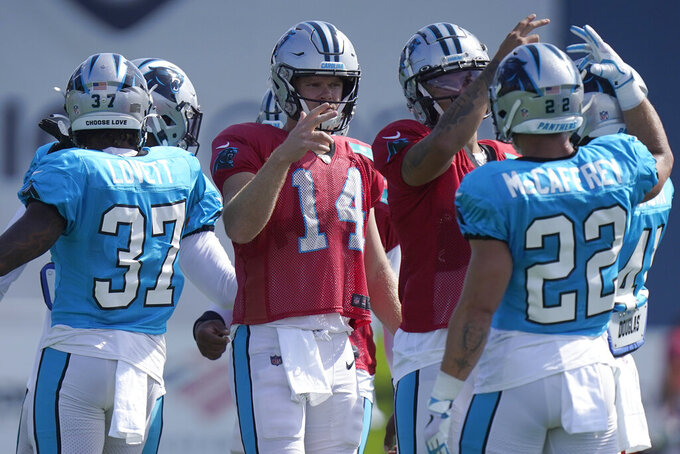 Strengths: The Panthers still have one of the league’s most dynamic players in RB Christian McCaffrey, providing he can stay healthy. McCaffrey has missed 22 of the past 33 games because of injuries. McCaffrey should provide a huge safety valve outlet in the passing game for newly announced starting QB Baker Mayfield. WR D.J. Moore is underrated and the Panthers hope that he and WRs Robbie Anderson, Shi Smith and Rashard Higgins will provide playmakers in new OC Ben McAdoo's offense. The defense, led by DE Brian Burns, LB Shaq Thompson and S Jeremy Chinn is young, but considered the strength of the team.

Weaknesses: The Panthers' offensive line was one of the worst in the league last season, but they've upgraded with the addition of No. 6 overall draft pick LT Ickey Ekwonu (NC State) and free agents C Bradley Bozeman (Ravens) and LG Austin Corbett (Rams). The hope is this group will provide some protection for Mayfield — something that Sam Darnold and Cam Newton rarely received last season.

Camp Development: One of the bright spots this summer has been the play of RT Taylor Moton, who coach Matt Rhule called the team's training camp MVP. Moton has the makings of being an All-Pro tackle if he can take the next step forward and has also taken on a leadership role. WR Shi Smith has come on strong in recent weeks and Rhule said he will compete for a starting job at wide receiver.

Fantasy Player To Watch: Moore has looked outstanding in training camp. He's coming off three consecutive 1,100-yard seasons and if he can find the end zone with more frequency — he's never had more than four TDs in a season in his four years in the league — he can be a valuable No. 3 wide receiver and a difference-maker.

Expectations: The Panthers aren't a trendy pick, even with the addition of Mayfield. However, if Mayfield provides some consistency and doesn't commit turnovers, Carolina's defense is good enough to keep it in games and give it a fighting chance in the NFC. The Panthers open the season with four of their first five games at home and have a chance to make some noise early. On the flip side, if things go south early it could cost Rhule his job. Carolina is 10-23 in two seasons under Rhule.