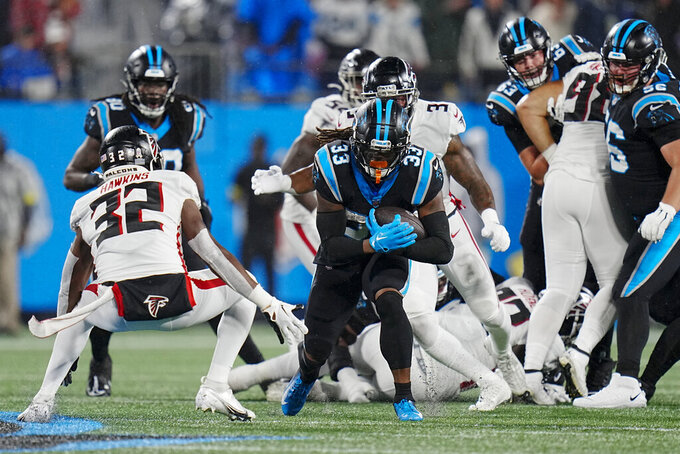 Carolina Panthers running back D'Onta Foreman runs against the Atlanta Falcons during the first half of an NFL football game on Thursday, Nov. 10, 2022, in Charlotte, N.C. (AP Photo/Rusty Jones)

CHARLOTTE, N.C. (AP) — A number of Carolina Panthers players are pushing the team’s multibillionaire owner David Tepper to replace the existing artificial surface at Bank of America Stadium with a grass field to help prevent injuries.

Wide receiver D.J. Moore said team leaders have spoken to Tepper about their desire to return to a grass field on multiple occasions this season, but as of yet have not heard if any change is being considered.

Bank of America Stadium, an outdoor, open-air facility, was built in 1995 and featured a grass field up until the spring of 2021.

But Tepper decided to install FieldTurf as part of a $50 million renovation project after landing a Major League Soccer expansion team.

The decision was made in part because of cost and practicality with the venue serving as host to an increased number of activities, including NFL games, MLS games, two to three college football games per year and several concerts such as the Rolling Stones, Elton John, Billy Joel and Kenny Chesney.

“It’s probably going to take all of us to stop going to practice until we get grass,” Panthers linebacker Shaq Thompson said. “I mean they make enough money off of us to maintain grass. I hate to say this, but with our last owner (Jerry Richardson) we had grass. ... Listen to your players. We want to play on grass.”

Attempts to reach Tepper through the team's public relations staff for comment on Monday were unsuccessful.

Several players around the NFL have been outspoken recently about the growing number of injuries related to playing on artificial surfaces, and the league's Players Association called on six venues to improve playing conditions. Bank of America Stadium was not one of the six mentioned by the NFLPA.

Panthers tight end Tommy Tremble is a huge advocate of grass fields, and he became even more adamant after cornerback Donte Jackson — who shares the locker next to him — ruptured his Achilles tendon in Carolina's 25-15 win over Atlanta on Thursday night.

He called it a “stupid” and unnecessary injury.

All three Carolina quarterbacks — Baker Mayfield, Sam Darnold and now P.J. Walker — have sustained high ankle sprains at home games, although it is difficult to pin those on the turf.

Tremble feels as if Tepper will eventually listen to the players, although it could take time.

“I think Tepper does really care about the players," Trembler said. "He and his wife are advocates for keeping us (safe). So I think he's in our corner. He’s not against us. I hope everything works out and we get the result that we want.”

Thompson spoke out this past July when the Panthers installed a temporary grass field over the top of their FieldTurf in order with Charlotte FC hosting a friendly soccer match against Chelsea.

That decision came at the request of the Chelsea team.

Thompson said if that can be done for a visiting soccer team, it should be done for an NFL team — although the cost of doing that repeatedly for every home game would be staggering.

“When they brought the soccer team in, they switched to grass quick enough," Thompson said. “So I guess the soccer team has a little more pull than we do and we play out here on this turf every week.”

When asked what he might say to Tepper about the artificial surface, defensive end Brian Burns said, “I would support my case that it’s just not good on our bodies. To play that many games, it just doesn’t do the body good. I think that we should have a better surface.”

Moore said the issue has been brought up to Tepper a couple of times — and now it's a waiting game.

“At the end of the day, he makes the last call," Moore said.