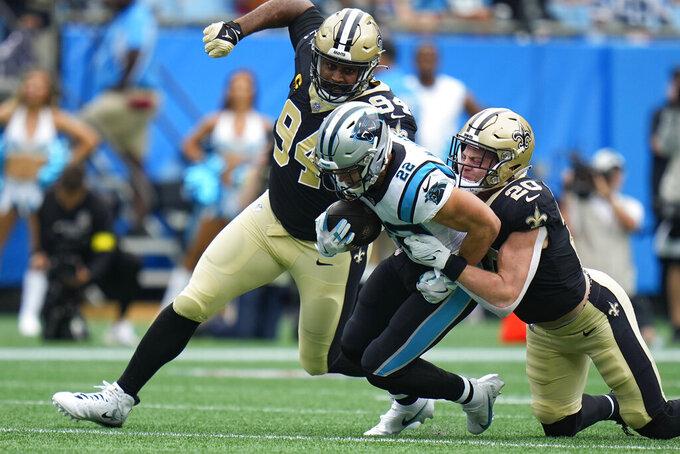 CHARLOTTE, N.C. (AP) — Just when it appeared Christian McCaffrey was looking healthy and rounding into form, the Carolina Panthers star running back is dealing with another setback.

McCaffrey doesn’t normally practice on Wednesdays because the team is taking measures to limit his workload given his history of injuries, but this week is a little different than normal as his absence is considered injury-related.

Rhule said McCaffrey's injury is something that “popped up” on Monday after the team’s 22-14 win against the New Orleans Saints on Sunday.

Rhule said he hopes to know more about McCaffrey’s status for Sunday’s game against the Arizona Cardinals after Thursday's practice, calling his status “day to day.”

McCaffrey did not attend practice on Wednesday, instead remaining inside the stadium to focus on his rehab.

“He’s taking care of himself and getting his body ready,” Rhule said.

The 26-year-old McCaffrey was hoping for an injury-free season after missing 23 of 33 games the previous two seasons with various injuries.

McCaffrey ran for 102 yards against the New York Giants and 108 yards against the Saints — his first two 100-yard rushing games since 2019 — the past two weeks, averaging 5.2 yards per carry. He was limited to 33 yards rushing in the season opener against Cleveland.

He is currently tied for fifth in the league in rushing with 243 yards.

“He's incredible,” Panthers guard Brady Christensen said. “I can't say much about (his injury status), but he's incredible and when he's on the field he's a game-changer. And so our run game is hugely important and whatever happens we are going to keep that ball rolling. No matter who is running the ball we have to open the lanes for those guys.”

The Panthers (1-2) are more prepared this season to handle a McCaffrey injury after signing unrestricted free agent D'Onta Foreman from the Tennessee Titans and with Chuba Hubbard now in his second year in the league.

Foreman, who ran for 566 yards and three touchdowns last season in place of the injured Derrick Henry, said he's prepared to carry the load if called upon.

“I know Christian has been hurt the past couple of years, and you never want to see a guy go down with injuries. I've been through that," Foreman said. “But at the end of the day it is part of the game and when those things happen, you have to be ready to go and capitalize on that opportunity."