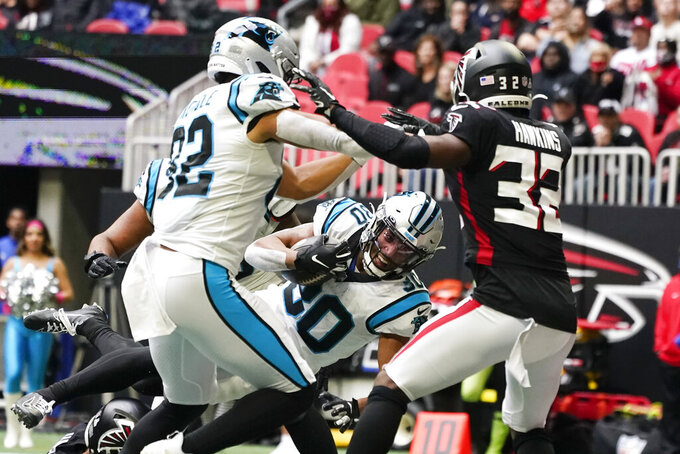 Carolina Panthers running back Chuba Hubbard (30) leaps into the end zone for a touchdown against the Atlanta Falcons during the second half of an NFL football game, Sunday, Oct. 31, 2021, in Atlanta. (AP Photo/Mark Humphrey)

CHARLOTTE, N.C. (AP) — Matt Rhule has been preaching for weeks that the Carolina Panthers need to stay committed to running the football and rely on a defense filled with former first- and second-round draft picks to win games.

The Panthers (4-4) did just that Sunday, running the ball 47 times for 203 yards and holding the Atlanta Falcons to 213 total yards of offense to snap a four-game losing steak with a 19-13 road win.

Carolina is expected to follow that same formula for success Sunday against the New England Patriots, especially if running back Christian McCaffrey is able to return from a hamstring injury and backup P.J. Walker is pressed into a starting role at quarterback.

Sam Darnold is in the league’s concussion protocol, but Rhule is “hopeful” that his QB will play against the Patriots. As for McCaffrey, he'll test out his hamstring in practice Wednesday and the team will make a determination on his status later in the week.

“Hopefully we can get Christian back soon,” Rhule said. “If it’s not this week, hopefully it will be next week.”

In the meantime, Chuba Hubbard bounced back from a fumble on the game's first play and finished with 82 yards and a touchdown on 24 carries, while recently added running back Ameer Abdullah added 31 yards on eight carries against Atlanta. Darnold had 66 yards rushing before taking a shot to the head in the second half.

Rhule said offensive coordinator Joe Brady, whose background at LSU was as a passing game coordinator, is just fine with running the football.

“Joe Brady wants to win so badly," Rhule said. "We have been trying to find the right formula. It's easy for me to say we want to run it, but you have to find ways run it. What I like is (on Sunday) we ran powers, counters, wide zones and shotgun runs. There was a versatility to it. ... When you have coordinators who can adapt to the situation and the game, that is the mark of a great coordinator.”

Still, the Panthers know that at some point they're going to have to move the ball through the air, too — and that is something they have struggled with as Darnold has thrown seven interceptions and just four touchdown passes in the last five games.

“If the team puts 10 guys in the box, you are going to have to throw it — and throw it well," Rhule said.

The return of linebacker and co-captain Shaq Thompson from a foot injury was a huge boost for the defense. Thompson finished with a team-high 10 tackles and had a one-handed intercepted on Matt Ryan despite seeing a limited number of snaps (66%) in his first game back from a three-game hiatus.

“It was awesome to have him back,” Rhule said. “He does a great job out there of running the show. ... Shaq is a special, special leader. When he speaks, people listen.”

The Panthers need to cut down on their penalties. They were penalized eight times for 76 yards against the Falcons. They are tied for fifth in the league in penalties with 55. Most can be attributed to the offensive line (including tight ends), which has been responsible for 11 holding and 11 false start penalties.

Cornerback Stephon Gilmore made an impact in his first game since being acquired in a trade, securing an interception with 1:52 remaining in the fourth quarter that helped seal the win. Gilmore, who was coming off the PUP list, only played 17 snaps. He looked good in coverage despite one pass interference call.

Expect Gilmore to work his way into the starting lineup, perhaps as early as this week when he faces his former team, the Patriots.

“It means a lot” to me, Gilmore said of facing New England.

Wide receiver Robby Anderson has done a disappearing act. He was targeted just once against the Falcons and failed to catch a pass after getting the wind knocked out of him. Over the past three games, Anderson has a combined six catches for 25 yards, which certainly doesn't bode well for the Panthers, who recently invested $37.5 million in him over the next three years to be a major part of the offense.

Darnold's status for Sunday should become apparent early in the week. If the Panthers make a roster move to get a quarterback, chances are Darnold won't play. Right now, Walker is the only healthy QB on the 53-man roster. The Panthers have undrafted rookie James Morgan on the practice squad. Adding a veteran with some NFL experience would certainly make sense. Carolina remains in the playoff hunt at 4-4. If the season ended today, the Panthers would be the third wild card in the NFC.

10 of 17 — Carolina's third-down conversions against the Falcons, which comes one week after they were 2 of 15 in a 25-3 loss to the New York Giants.

This is clearly not the most entertaining team in the league moving forward, but as Rhule pointed out: “We're going to have to come to terms with the fact that we're a defensive football team. And when we play good defense and win the takeaway battle, we are going to win games. Part of that on offense is running the football."