Patriots' young LBs could get playing time early this season 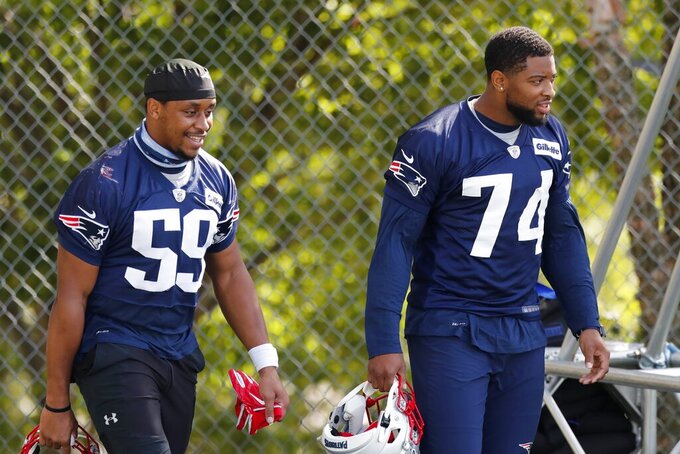 FOXBOROUGH, Mass. (AP) — The Patriots expected to have a different look at on defense this season following an offseason that saw the departures of linebackers Jamie Collins, Kyle Van Noy and Elandon Roberts.

Collins and Van Noy were two of New England’s leading tacklers in 2019. Roberts had the flexibility to play on both the inside and outside, while also contributing on special teams. New England then took another hit at the position — a major one — when two-time Pro Bowler and captain Dont’a Hightower decided to opt out of this season because of COVID-19 concerns.

Instead of relying exclusively on the free agent market to fill the open spots, Bill Belichick instead turned to the draft, using a second-round pick to grab Michigan’s Josh Uche, and a third-round selection on Anfernee Jennings out of Alabama.

So far things have worked out, with both rookies expected to be in the game plan for Sunday’s season opener against Miami. Belichick said how much of a role they will play is still to be determined, but he plans to utilize their versatility.

“We’ll have a plan, we’ll have an idea of how we think it will go, or the areas that we want to use them and that may change from week to week,” Belichick said. “But as it stands right now, we’ll have something, but we’ll have to see how that works itself out.

“There are other players on our team that have versatility, too, so when you combine those things together, you just have to figure out what you feel like gives you your best combination from an execution standpoint.”

Jennings spent most of his time in Alabama playing on the edge, but said he enjoyed being asked to do new things in training camp.

The same goes for Uche, who excelled at Michigan as edge rusher, but experimented during training camp playing both off the line and inside in certain situations.

“Whatever’s needed of me is what I’m going to do at the end of the day,” Uche said. “Football is football, so I’m here to do a job, they brought me in to do a job, and I’m working hard every day to get what’s asked of me done.”

Neither will be totally thrown into the fire.

Ja’Whaun Bentley appeared in all 16 games in his second season in 2019, contributing 44 tackles. He has quickly grown into a locker room favorite and was made a captain on defense.

The Patriots also added veteran outside linebacker Brandon Copeland in March. He comes with some built-in AFC East experience, having spent the last two seasons with the Jets.

Safeties Devin McCourty and Terrence Brooks are also capable of playing linebacker in certain formations, as is rookie Kyle Dugger.

Inside linebackers coach Jerod Mayo said feeling comfortable playing different positions on defense is something they want everyone to embrace.

“We don’t teach in spots,” Mayo said. “We teach from a philosophical standpoint and also a schematic standpoint, so you’re not just learning your position. You’re learning what everyone on the field is doing.”