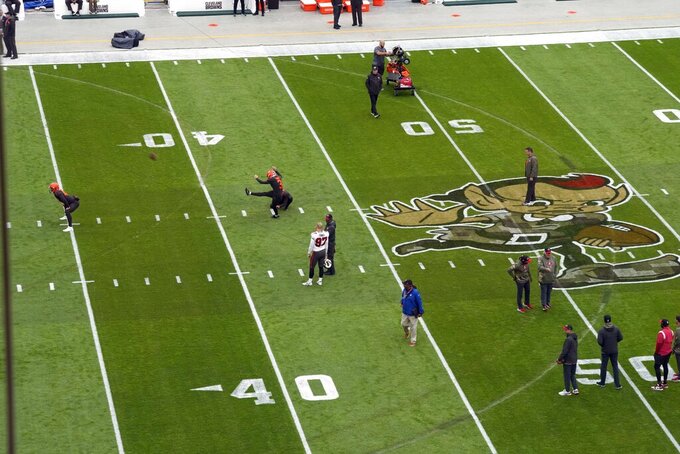 Remnants of tire tracks made by a person who broke into First Energy Stadium earlier this week and drove a vehicle around the field, can be seen during team warm ups before an NFL football game between the Cleveland Browns and the Tampa Bay Buccaneers in Cleveland, Sunday, Nov. 27, 2022. (AP Photo/Gene J. Puskar)

CLEVELAND (AP) — Cleveland police have released the name of the man they believe damaged the field at FirstEnergy Stadium by driving a vehicle on it a few days before the Browns hosted the Tampa Bay Buccaneers.

The 21-year-old suspect, Anthony Robert Westley O’Neal, has not been arrested. While no charges have been field, O'Neal will be a “direct indictment” to the Cuyahoga County Grand Jury, police said Thursday.

The natural grass playing surface was torn up by the vehicle, leaving tire marks on half the field that were still visible on Sunday during Cleveland's 23-17 overtime victory. The team said its stadium maintenance crew addressed superficial damage to the turf.

Police said the field was damaged on Nov. 21.