QB Jones set to start for Giants against Packers in London 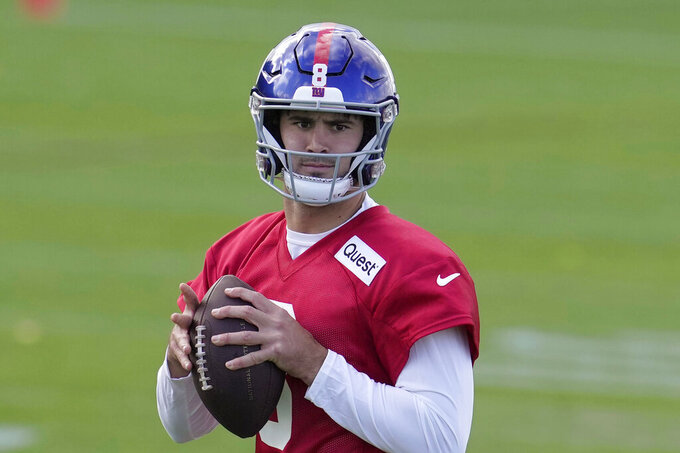 Jones sprained his left ankle last Sunday and was limited in midweek practices before the London trip but didn't receive an injury status Friday. He moved fluidly in the portion of practice open to the media.

Backup quarterback Tyrod Taylor was ruled out, making it likely Davis Webb will be elevated from the practice squad. Taylor is still in the concussion protocol. Webb has never thrown a pass in an NFL game, having played just once last season.

Safety Julian Love also was a full participant at practice and didn’t receive an injury status, clearing the way for his return from a concussion.

Jones ran for two touchdowns before injuring his ankle in the third quarter of the 20-12 victory over the Chicago Bears. Taylor left the game shortly thereafter following a hard tackle.

“Early in the week I started feeling better pretty quickly and realized that I was recovering quickly,” Jones said after practice near the team hotel north of London.

Coach Brian Daboll shed more light on Toney's hamstring injury, saying it's the 2021 first-round draft pick's other hamstring that sidelined him this time. He injured during practice Thursday.

“It was the other hamstring, it wasn’t the same one,” Daboll said. “I feel bad for him. He was running around, he was getting a lot better.”

Jones tried to stay positive despite a depleted receiving corps.

“We’ve had guys step up throughout the year,” Jones said.

Jones and running back Saquon Barkley present a dual threat for defenses. Barkley is the NFL’s leading rusher and Jones has 18 rushing first downs — the most among quarterbacks and tied for third-most overall through four games.

“He’s a gritty guy, he’s a tough guy," Barkley said. "It does speak volumes when your quarterback has that mindset.”