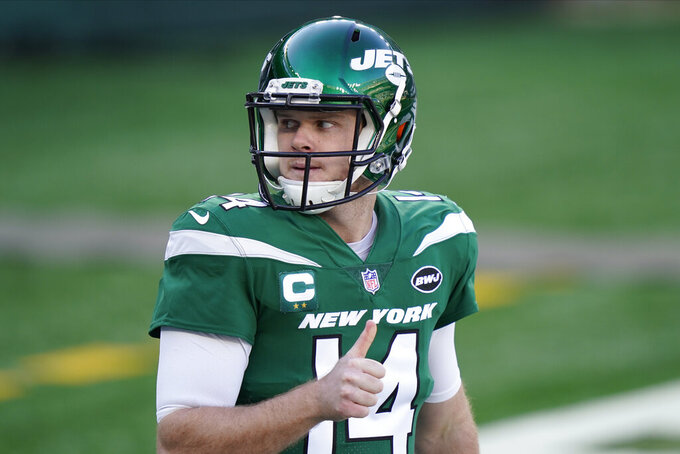 EAST RUTHERFORD, N.J. (AP) — Derek Carr has been here before, on a winless team deep into a season and hungry for an elusive victory.

That’s why the Las Vegas Raiders quarterback is wary, not wanting his squad to be the team the 0-11 New York Jets beat to finally erase that ugly zero from their wins column.

“It’s a matter of time before they get things going and do things the right way,” Carr said. “I’m sure that they are. I’ll pump the brakes on a winless team and just reiterate that they kicked the crap out of us the last time we played them. We had to go there, they beat the dog out of us.

"So, if we don’t bring it, they’ll do the same thing again.”

Carr was referring to last season, when Sam Darnold and the Jets rolled past the Raiders 34-3 at MetLife Stadium. New York was in the middle of a final stretch during which it won six of its last eight games.

This season, the Jets haven't been able to get just one victory. They've already set the franchise mark for the longest single-season losing streak, and a loss Sunday to the Raiders (6-5) at East Rutherford, New Jersey, will tie for the worst overall skid set across two seasons by the 1995-96 team under Rich Kotite.

Carr certainly knows the feeling. He was part of the 2014 Raiders team that started 0-10 before finishing 3-13. The win over Kansas City in Week 12 ended a 16-game losing streak dating to the 2013 season.

Darnold returned last week from a two-game absence because of a shoulder injury and didn't provide the spark to the Jets' offense they hoped. The third-year quarterback threw two interceptions, and he hasn't had a touchdown pass in over four games — a span of 19 quarters.

“Yeah, it’s frustrating,” coach Adam Gase said. “For him, personally, I’m sure it bothers him, knowing things like that. I mean, I look at as we've got to do a better job as a staff. We've got to put these guys in the best position possible and then those guys have got to go execute. I mean, it’s on all of us.”

The Raiders' running game that was so dominant during a three-game winning streak, averaging more than 190 yards rushing per game, has struggled in losses the past two weeks.

Las Vegas had 89 yards on 26 carries against Kansas City and then a season-low 40 yards on 14 attempts last week at Atlanta as halfback Josh Jacobs and fullback Alec Ingold have both dealt with lingering injuries.

After seeming to solve their perpetual penalty problems early in the season, the Raiders have gotten sloppy in recent weeks.

Las Vegas was tied for the fourth-fewest penalties in the league over the first nine weeks before committing 27 the past three games, the second-worst mark in that span. They had a roughing-the-kicker call last week that turned a missed field goal into a TD drive, and several other sloppy penalties.

“We do try to go out on the practice field and make corrections, whether it be fundamental errors or lack of discipline, we try to emphasize it,” coach Jon Gruden said. “In the meeting room, we try to drill it and help correct it on the practice field, and we send in some of the calls that we don’t agree with so we’re all on the same page rules-wise.”

Only a handful of players are still around in the NFL who played against Gruden in his first stint as a coach before joining the broadcast booth. Most of them are quarterbacks or specialists, but Jets running back Frank Gore is still going strong in his 16th season, with his 521 yards rushing the most for a player age 37 or older.

“I remember he had all these injuries (in college) and everybody said don’t touch him because he’s hurt, and all he’s done is gore people running the ball, catching passes, picking up the blitz,” Gruden said. “He’s a friend of mine. He’s a great back, he’s what the NFL is all about. I wish all young running backs could meet Frank Gore, watch him work, to see why he’s been able to do what he’s done.

"He’s as physically and mentally tough as anybody that’s been in the NFL in this history of this league.”